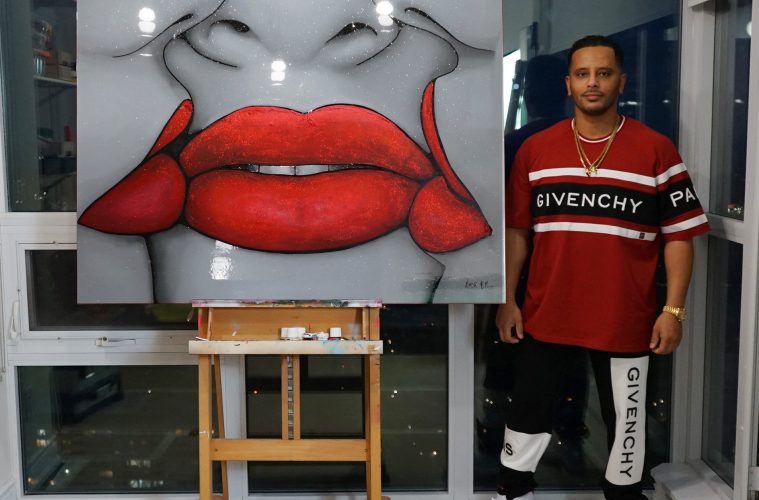 Art By Amer Sm is a breath of fresh air to the art world, bringing an exciting interpretation to the artwork. Amer Sal Mohammed and his partner Cody Schindermann, are captivating people with their original approach. Their expression is unique – tapping into people’s imaginations and taking them on a creative journey. The duo wants people to delve deep into their imagination, and let the artwork speak for itself. 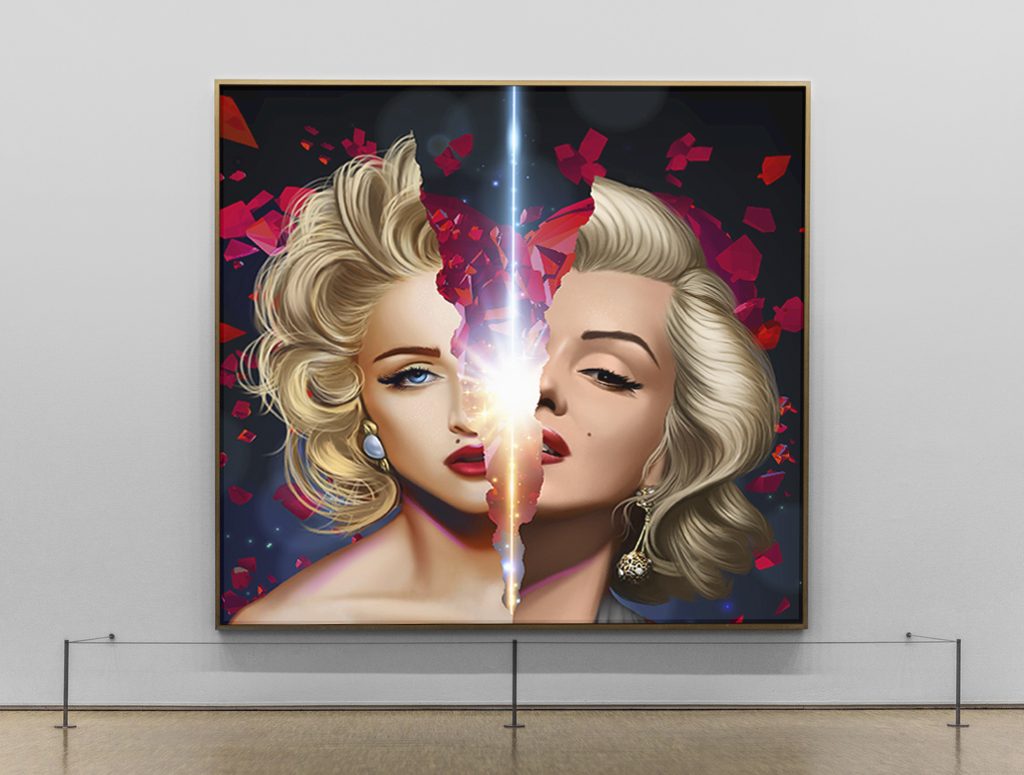 What is Art By Amer SM?

How did you and Cody Schindermann decide to create a partnership and what are your specific roles?

Art By Amer SM is a brand that literally is created from a team of two, a ying/yang type of dynamic, consisting of a visual creator, which is myself, and my conceptual creator, who is Cody. I do the paintings, and Cody comes up with the original ideas,we collaborate on creative twists, he also handles the majority of the business aspect of Art By Amer SM, allowing me to dedicate more time to painting. 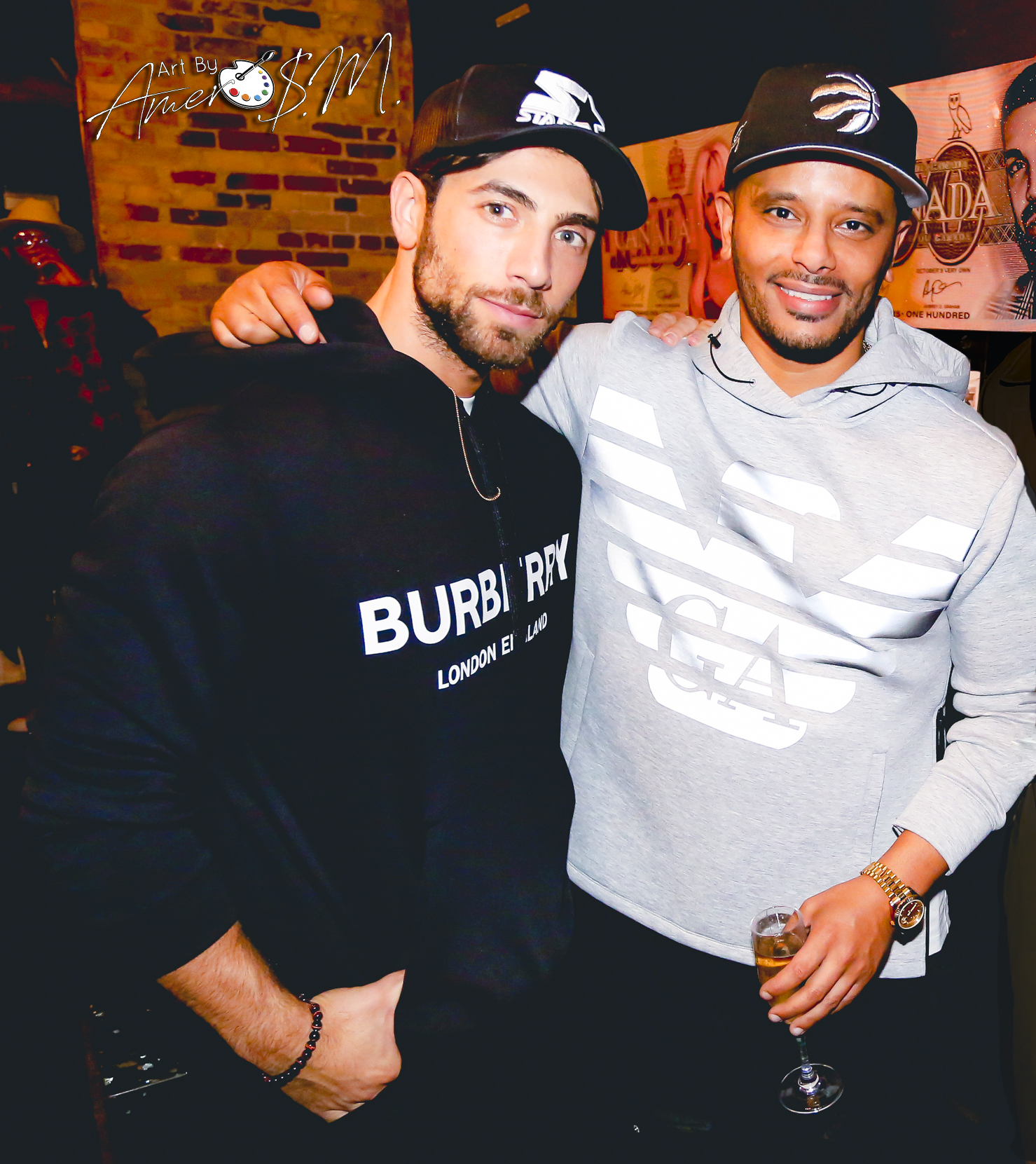 How did you begin painting professionally?

I put myself through school by working as a club promoter in Toronto. I completed one year at Humber College in an art foundation course before getting into my field of Packaging and Graphic Design. However, there was minimal creative freedom, and ironically, I was making more money as a promoter. So I decided to open up my own design company called Digital Demand Studio. Where I would make business cards and flyers, basically all the digital media involved for club owners.

How did you make the leap from painting as a hobby to professionally?

I found myself painting for some projects that were asked of me, it started with one or two, and just took off from word of mouth. The work, I suppose spoke for itself, which even surprised me. Cody was the first person to really stand behind me and literally walk with me from the beginning of this journey. He saw the value in what I was doing, which definitely gave me more confidence. I remember him telling me if this was something I really wanted then to just go for it, easier said then done right? But he stuck by me through it and here we are. When you first tell most people about your dream, they’ll tell you to stick with what’s safe or brings the quick dollar, but what good is that if you aren’t truly happy? I went from having a piece or two in the back of the club to taking over an entire venue. People don’t really see the struggle in the beginning, they don’t see the real persistence and effort it takes to establish yourself in such a competitive field with so many talented artists. Following your dream isn’t something for everyone to be honest, it really requires the ability of risk taking and knowing you could fail. 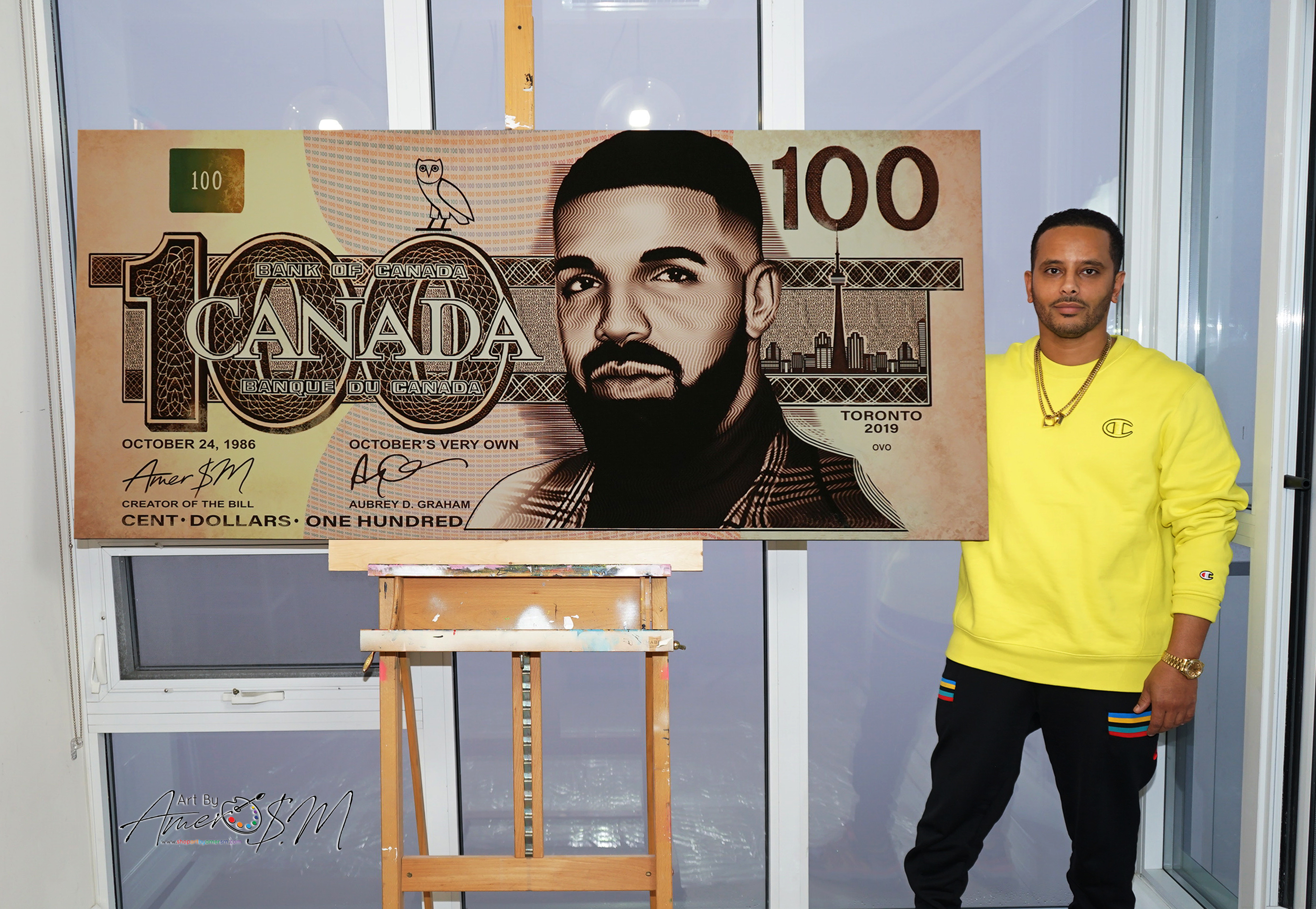 How did you go about branding yourself as an artist?

Over the last decade, I worked for several companies, and in nightclubs, as a marketing coordinator; still painting was always my end goal. So I used the club connections I had branded for in the past, as a platform to showcase my art.

What is the process for making each piece?

Each piece is its own story, and just as any idea starts, there are a lot of back and forths with Cody and I. Concepts take even longer than the actual piece sometimes, we are constantly looking for unique ways to portray something with subliminal undertones. Once we’ve figured out exactly what we are trying to relay to the audience, it’s then about every single detail that goes into it. It has to be perfect, it has to be something that resonates with you when you see it. 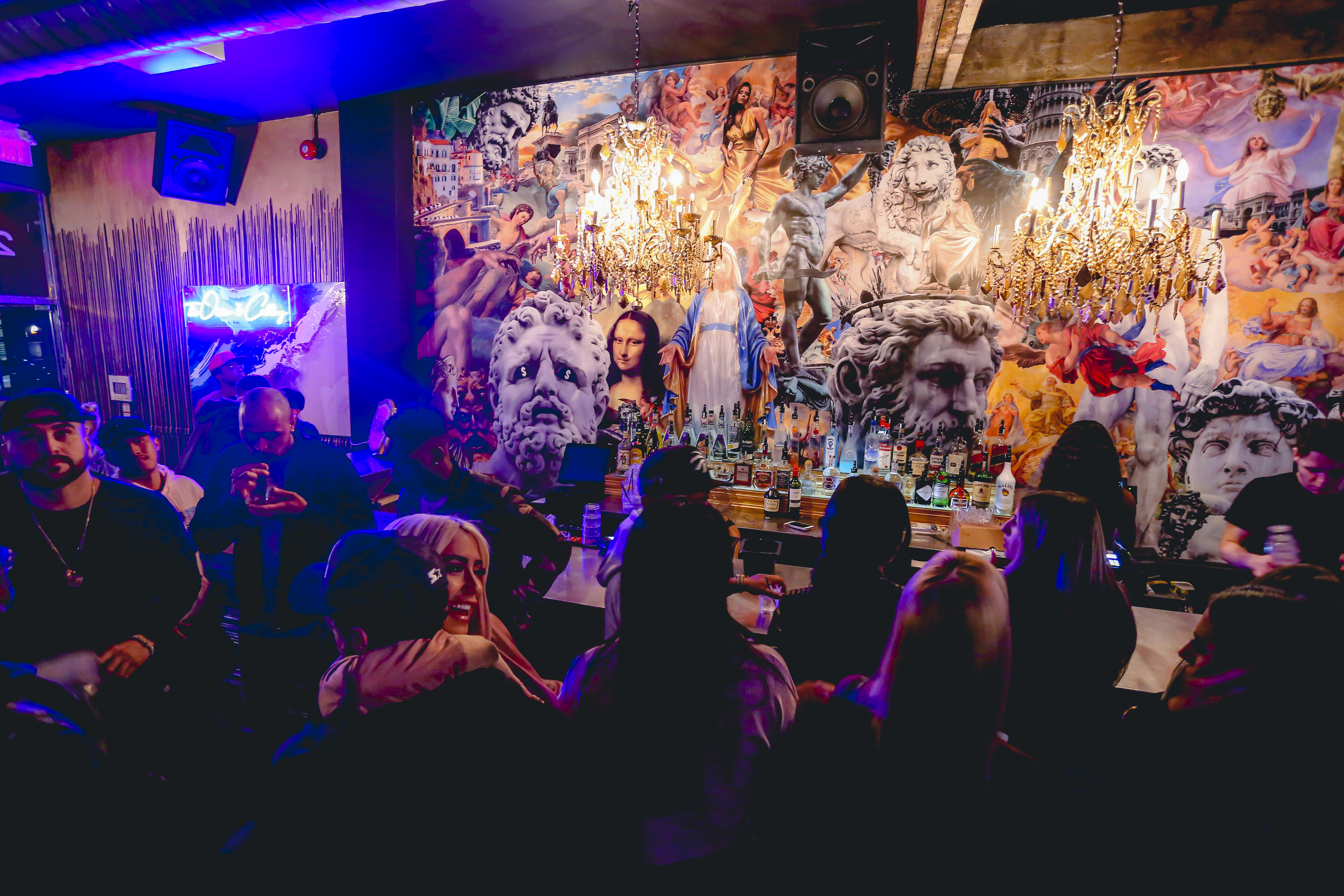 Which piece is most significant to each of you and why?

About three years ago, I needed a break from city life, the concrete walls and constant on the go, so I decided I needed simplicity. I flew to the Caribbean. As I sat on the beach watching the waves clash with the sand over and over it jus felt peaceful. It felt calming. So when I got home, I bought some paint from home depot, layered on some blue and let it dry for 24hrs. Each colour in this piece had a 24 hr wait period in between, taking quite some time to complete. When I displayed it at my first show, it was so abstract the viewers couldn’t understand it was the water colliding with the sand. I explained the idea to Cody and he came up with idea to put a modern led light signage on it titled The Ocean Is Calling.

Cody: My favorite is the Tiger Woods painting because it highlights the trials and tribulations of what Tiger went through and subliminally hints at overcoming adversity. During the time Tiger had a series of events going on in his life it didn’t matter about all the accomplishments he had made, society had chosen to judge him on his personal choices in his personal life, it was until he won the recent PGA tour that the public decided to accept him again. It’s something I can’t understand, but has taught me at the end of the day you will never please everyone, nor should you care to, as long as you are living for you and the people you love is all that should matter. 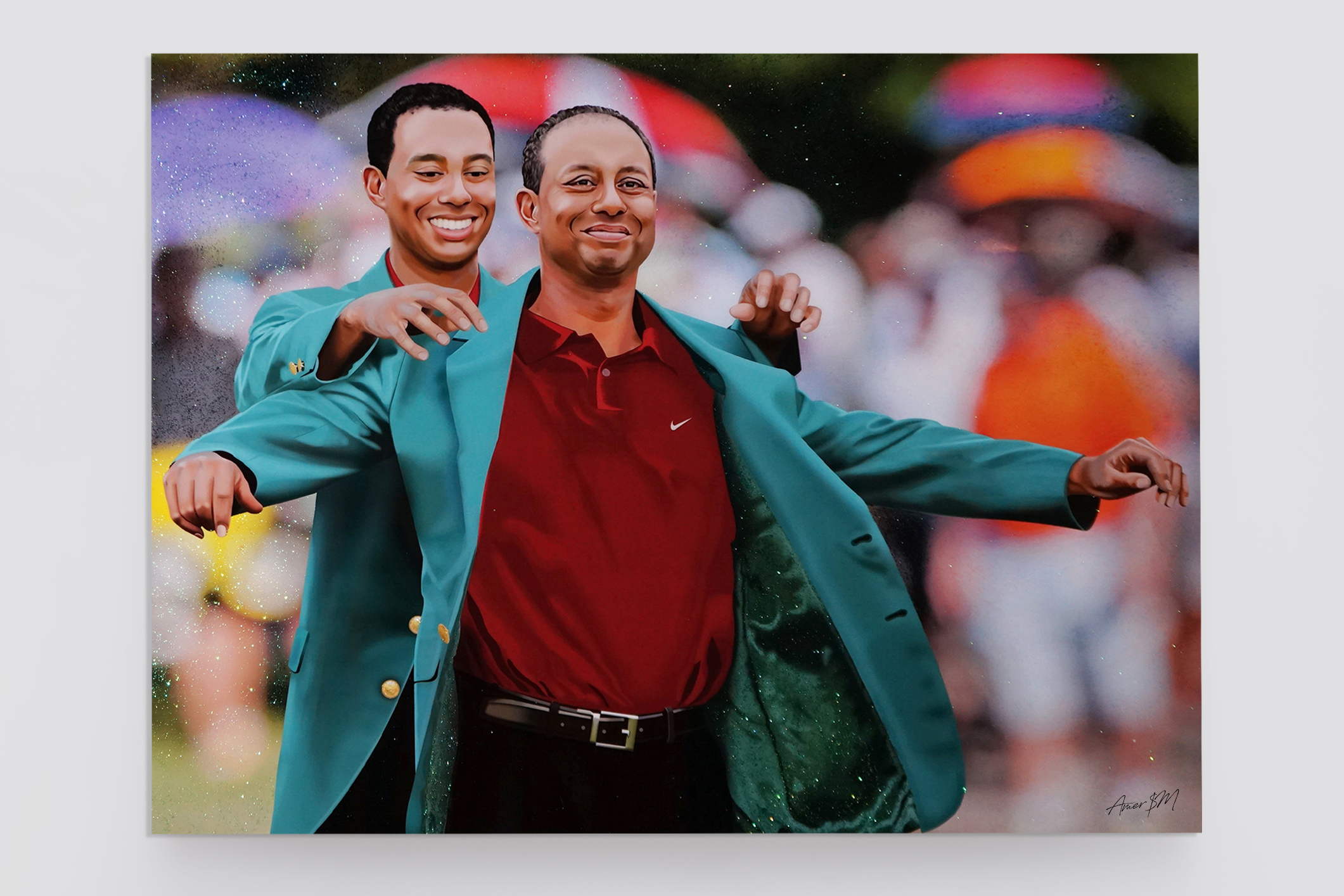 Tell us about this collection and what you’re trying to convey?

This collection is called Iconic Memories, and it contains 20 paintings. Our intention was to create an atmosphere of cultural icons, but with a twist to their accomplishments, something that could display their achievements, but in a more subliminal tone. We really tried to focus on giving the audience the ability to feel they’re uncovering hidden details as they gaze through each piece. 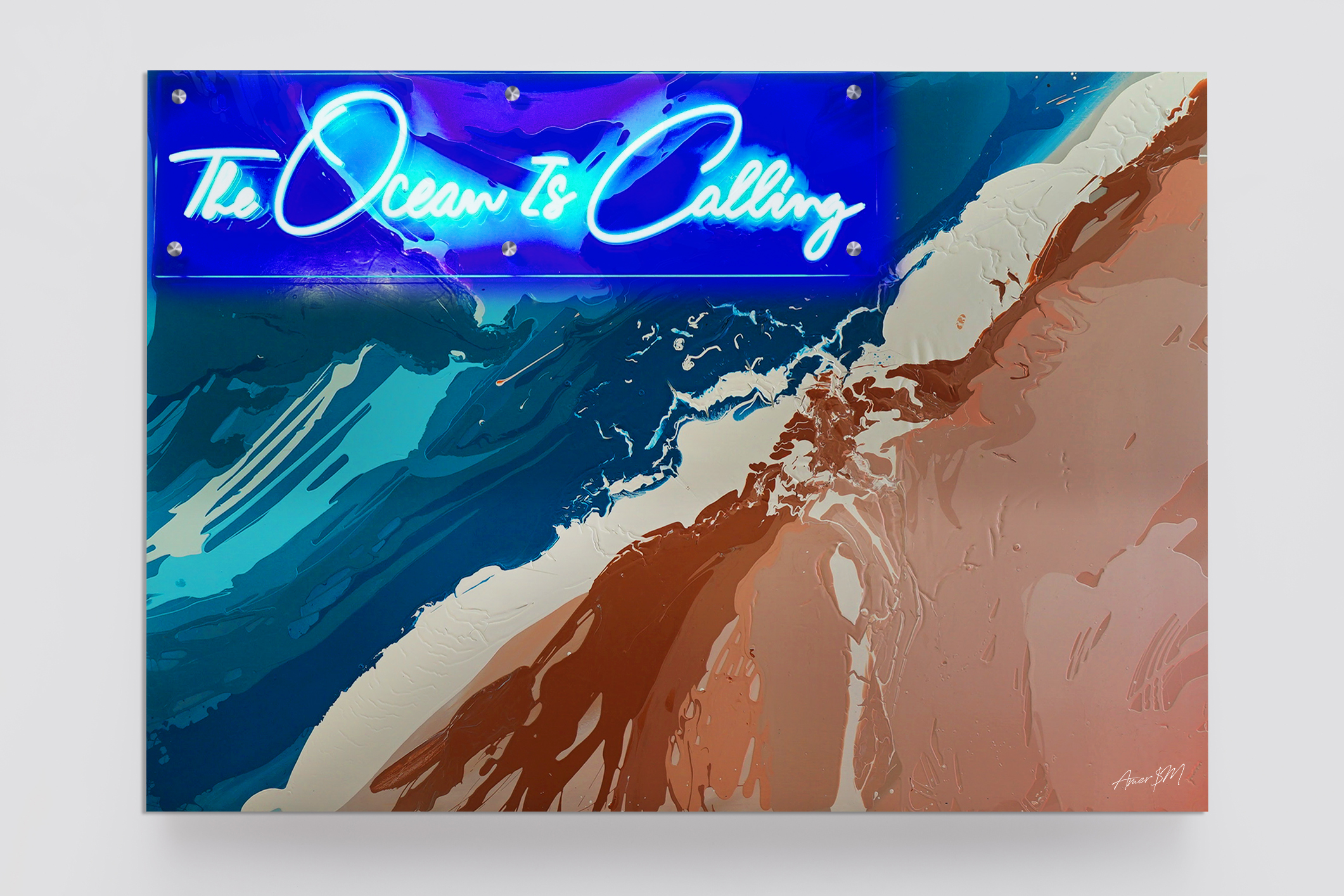 What are some future goals for Art By Amer SM?

Exposure! We aim to do this through social media and exhibits. It’s important to us that people see we are different and unique. We want our branding to stand out on its own, so when someone picks up a piece by Amer SM, they recognize it, so consistency and reaching out is key. We have a couple of surprises up our sleeves so we are very excited of what the future holds, and as I have been telling myself from day one, I’m just going to follow this dream and see where it takes me. 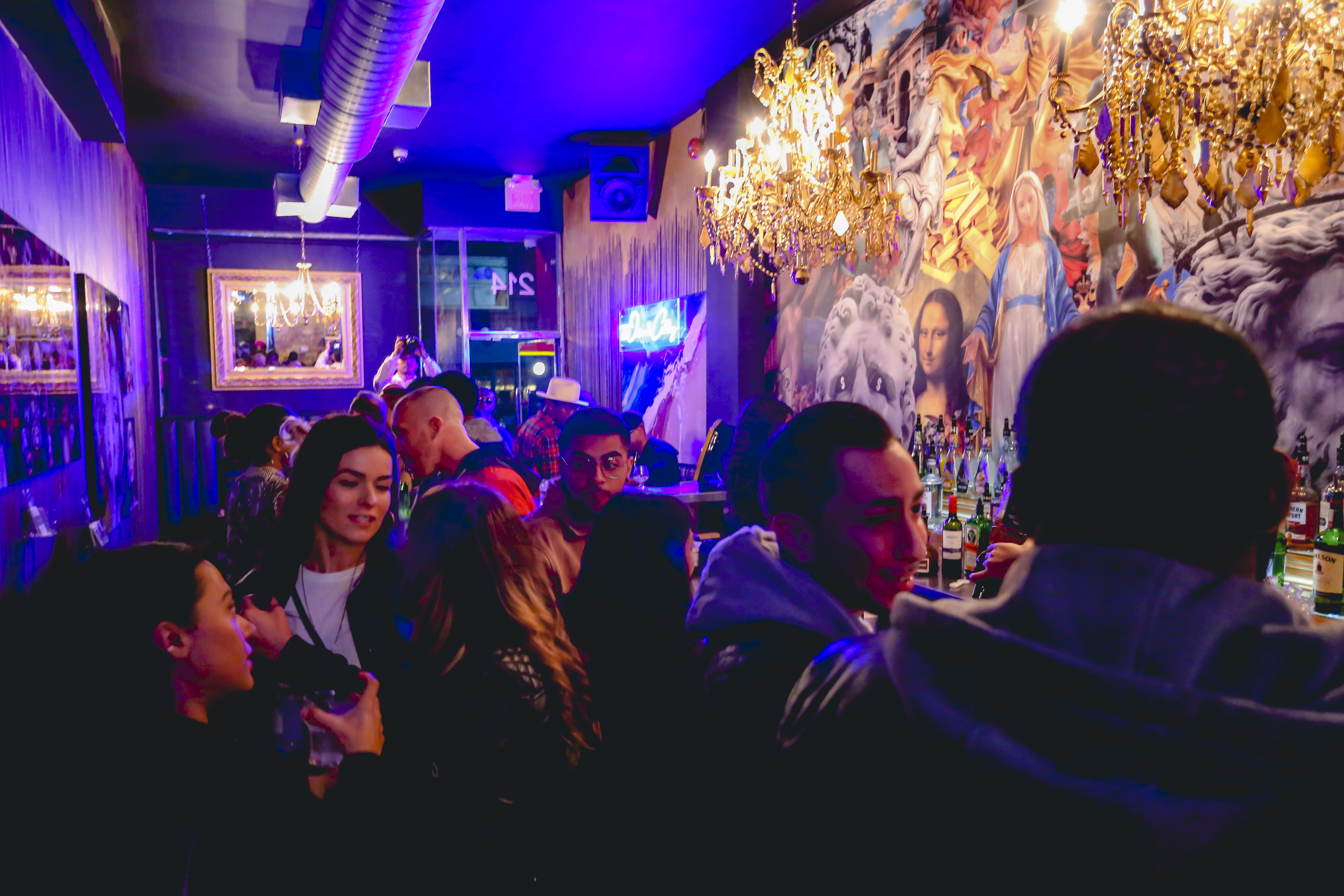