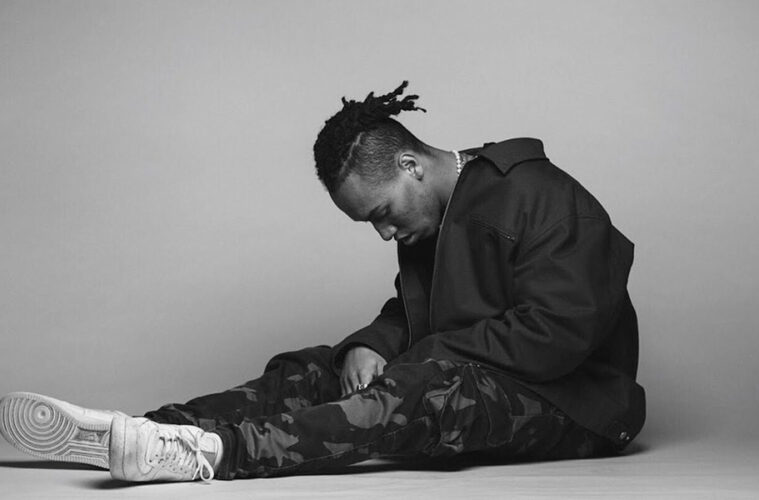 “There’s always going to be setbacks; there’s always going to be knockdowns” -Post Malone once said this and it resonates with new Vancouver-based artist Boslen. Boslen is of Jamaican and Indigenous descent, he grew up with a different dream than the one he is currently following. Boslen thought he was going to be representing his country with the National Rugby team until an ACL injury, unfortunately, ended that dream. With that, Boslen channelled that pain and turned it into music, following a bigger and better path for himself.

At Just 22 years old Boslen is being considered “one of the brightest rising artists” by Ones to Watch and Lyrical Lemonade who said, “Boslen is on a clear cut path for international stardom.” With singles like “Eye for an Eye” and “Vultures” and an EP like “BLACK LOTUS” the Canadian now has over 15 million combined streams and is set to release more music.

Growing up and achieving success in the sport of rugby, did you ever think that music would be as much of an importance to you as it is now?

Music was always significant to me throughout my rugby career. I would blast it in the locker room before matches and I’d go on long runs and use it as motivation to keep going. I found that music itself contributed to my mental health as I transitioned into the music industry. I thought that rugby was going to be my lifelong career so it wasn’t until that was taken away from me that I really discovered my passion for music. Writing songs became very therapeutic to me and helped with my overall health.

Did you always have a musical influence growing up? Do you play instruments or did you have singing lessons?

My mother and stepfather would always play music around the house growing up. Artists like Whitney Houston, Johnny Cash, Elvis Presley and B.B King were some of the sounds I would hear. Also, growing up in Chilliwack, BC, I spent most of my time in the skatepark. That’s when I started to discover artists like Kid Cudi, Machine Gun Kelly, Mac Miller and Wiz Khalifa, who were prominent figures for me and the kids I hung around. Those four were honestly the main reason I fell in love with Hip Hop. As far as instruments go, I can play the guitar but I have always had an interest in singing lessons and learning the piano. This year I definitely want to do both.

Did you find it hard transitioning that emotion from losing something as important as rugby, to music, or was it something you always turned to?

The transition for me was pretty easy honestly. I took the pain and the loss of what I thought was going to be my career and brought that energy towards music right away. Writing was really the medicine to aid my mental health. But what I cherish most about the transition from sports to music is the competitive mentality. Since I was conditioned to practice and play six days a week for seven years, I took the same dedication and applied it to my music career. Since I already had that mentality, constant studio sessions, writing, and researching artists that had come before me came kind of second nature.

How have your musical influences like Post Malone and Kendrick Lamar influenced you to write your EP and any new music?

Kendrick Lamar and Post Malone are to this day some of my biggest influences but for this project, I really drew influence from The Weeknd, Travis Scott, and Kanye West. These artists in particular have influenced my sound by their attention to detail and the range they all are willing to push their sound. Creating this project, I found that I am capable of tapping into a wide range of, not only emotions but sounds. I found myself exploring Pop, Alternative Hip Hop, and even R&B. I approached this project more self-aware than I have ever felt in my life and I felt like I needed to share my reflections on my past experiences and relationships.

You say your music always helps you get through a lot and you hope it does the same for your fans. What is it that makes music so special to you and helps you?

I think the best part about music is that everyone has a different experience. It paints a different picture of what the art can be for each unique listener. For me, music has always been a place where I can go to escape this world. Especially in the past year with all that surrounded the events of the BLM movement, COVID, and everything else, I think everyone deserves some time in the day to escape and have peace. The fact that I now have the opportunity to give kids that sense of peace or inspiration makes music all that more special and impactful to me. That is what I want my legacy to be.

Your new single DENY is the second single from your upcoming album DUSK to DAWN. Can you tell us anything we can expect from the song or the new album?

This single DENY was easily one of the most important songs I have made to date. It touches on something I have been afraid to face for the past two years of my life – denying something you once thought was good for you. I think a lot of people can connect with and relate to this in their own way. Tyla and I have a new video coming next month so you can expect that from DENY.

In regards to this album, you can expect my best work to date. I really took my time on where I wanted this story to go and what I wanted to say. My executive producer just saying and I really wanted this album to feel like a story and something he and I can look back on in 10 years and still be proud of.

Your EP BLACK LOTUS was among some of the best artists in the world like A Boogie Wit da Hoodie and Pop Smoke. What does that mean to you, as you are alongside some of your influencers?

It felt great at the time. I think living in the moment is something I forget to do a lot but I think that it is important to celebrate milestones, big or small. But for me, I am still very early in my career so I am constantly pushing for the next milestone. My next goal is to bring a new sound to the city of Vancouver.

How has being of Canadian-Indigenous/Jamaican descent influenced you in the music world? Do you hope to bring more awareness to your descent and background?

would have as a family when I was young. Because I didn’t grow up with my biological father, I was never exposed to the Jamaican culture. Once I started to listen to rap and some reggae, that’s what brought me closer to my Jamaican side. The more I make music, the more I hope to continue to learn more about myself and my culture. It has always been a goal of mine to bring awareness to my background and culture. Once I am in a position in my career where I can, the first thing I will do is give back to my community and the kids on the reserves.

Are there any musicians that influenced you that you hope to work with on upcoming songs, or even the upcoming album?

Luckily there are three artists album who have inspired me that I had the chance of working with on my upcoming album. The first being Tyla Yaweh, the others I can’t share yet! Some of the artists I hope to work with one day are Kid Cudi, Kaash Paige, and Post Malone.