Doja Cat Releases A New Version Of Her Hit Single ‘Juicy’ With Tyga.

Los Angeles producer/singer/songwriter Doja Cat recently released a new version of her hit single “Juicy” with Tyga along with an accompanying video via RCA Records. The colourful and fruit filled visual was shot in Los Angeles, directed by Jack Begert and produced by Sam Canter.

“Juicy” first appeared earlier this year on Doja’s Amala Deluxe album and has been met with great critical praise. Having been streamed over 25 million times worldwide, “Juicy” is one of Elle’s “Best Songs of 2019 (So Far)” explaining “ it’s three minutes of pure magic…The airy, bubbly synths and Doja’s flirty lyrics about her, well, booty, have the power to make me shake what the good Lord gave me.” Doja also delivered an energetic performance of the track on ‘A COLORS SHOW.’ Click HERE to watch. 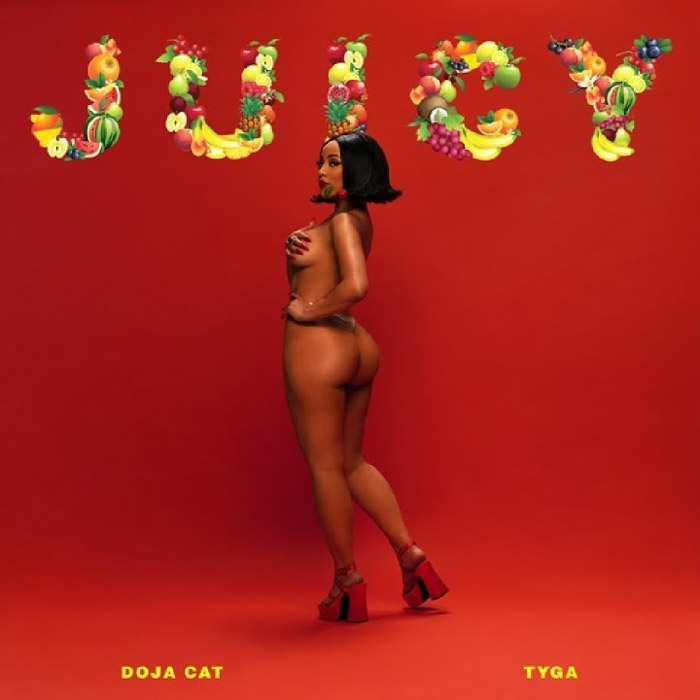 Born and raised in L.A., Doja Cat made her first upload to Soundcloud in 2013 at just 16-years-old. She developed a knack for music by studying piano and dance as a kid and listening to the likes of Busta Rhymes, Erykah Badu, Nicki Minaj, Drake, and more. Soon, she went from obsessing over Catwoman (the Halle Berry version) to “crate digging” on YouTube. The budding talent taught herself Logic and how to compose on a midi controller.

Signed to RCA during 2014, she unveiled her acclaimed Purrr! EP. Its lead single “So High” impressively racked up over 30 million cumulative streams and garnered praise from tastemakers such as Fader, Vibe, Paper, Pigeons & Planes, and more. Averaging nearly half-a-million monthly listeners on Spotify, she further engaged that growing fan base by touring with the likes of Lizzo, Father and Theophilus London. Along the way, she assembled what would become her debut album,  Amala.

Cooking up vibrantly, candy-coated beats, dropping bars doubled-up on double entendre, and singing with claws out, Amala unlocks a sweetly sexy world soundtracked by wild hip-hop, twisted pop, and smoked-out R&B. Asserting a feline-esque dominance and a style that can only be described as every color in a box of crayons, Doja Cat’s unapologetic charisma, charm, and confidence immediately take center stage.

As she readies her next full length project, Doja’s ability to create hit records that are uniquely her own are what will continue to make her a standout act in 2019.

Watch “Juicy” with Tyga and keep an eye out for more from Doja Cat coming soon.