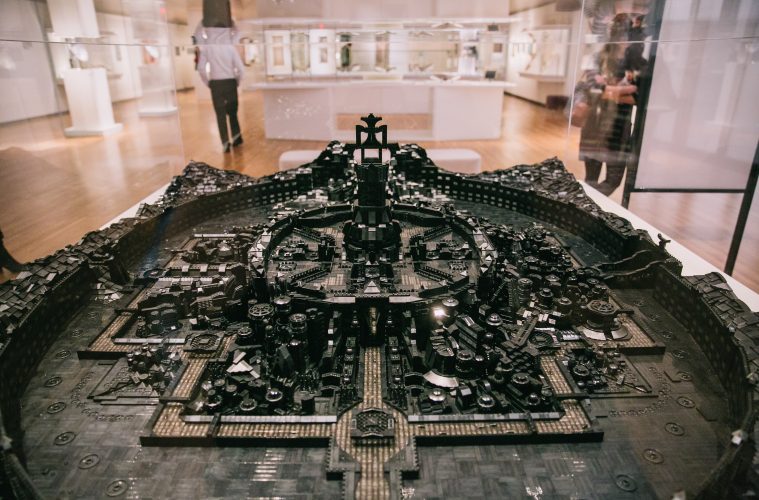 “Michael Chagnon, the curator, and I both agree that this is the most important piece in Caravans of Gold”, says artist Ekow Nimako, pointing to the copper, seated figure of a little girl. Her arms are missing and she’s enclosed in glass, the look on her face, very stoic. She’s from Nigeria, thought to be of the Ife tribe from the late 13th-14th Century. She, like most of the artifacts in the exhibit, Caravans of Gold, Fragments in Time: Arts, Culture, and Exchange Across Medieval Saharan Africa at the Aga Khan Museum in Toronto, give very distinct clues about medieval trade routes and the interaction various cultures had with each other, with Africa at the forefront.

Nimako provides a response to Caravans in his accompanying work, Building Black: Civilizations. This is the latest in his Building Black series (he’s also shown at Nuit Blanche, and international art shows), where he’s created stunning, intricate sculptures of camels, warriors, megaliths and more. The exhibit culminates at a 30 square foot centre-piece that reveals an Afrofuturist utopian metropolis. His medium of choice you ask? Over 100,000 pieces of black LEGO —  an exercise in focus and patience to say the least.

“I work with a medium that has its own iconic life. It exists in people’s minds culturally — pop-culturally, but this is fine art. I just happen to be using material that everyone knows”, explains Nimako. The colour black? Not only is it a nod to his culture, being of Ghanian descent, it also lends a sophistication to the work, taking away then typical “LEGO-ness” we’d all typically associate with the building blocks.

Building from an idea that came years before being serendipitously approached by the museum, Nimako knew that he wanted to create something that explored aspects of surrealist architecture rooted in the continent of Africa; architecture that is ornate, and graphic, and have people think of the people as creators of beauty and epic monuments. No piece demonstrates that more than World on a Camel’s Back. 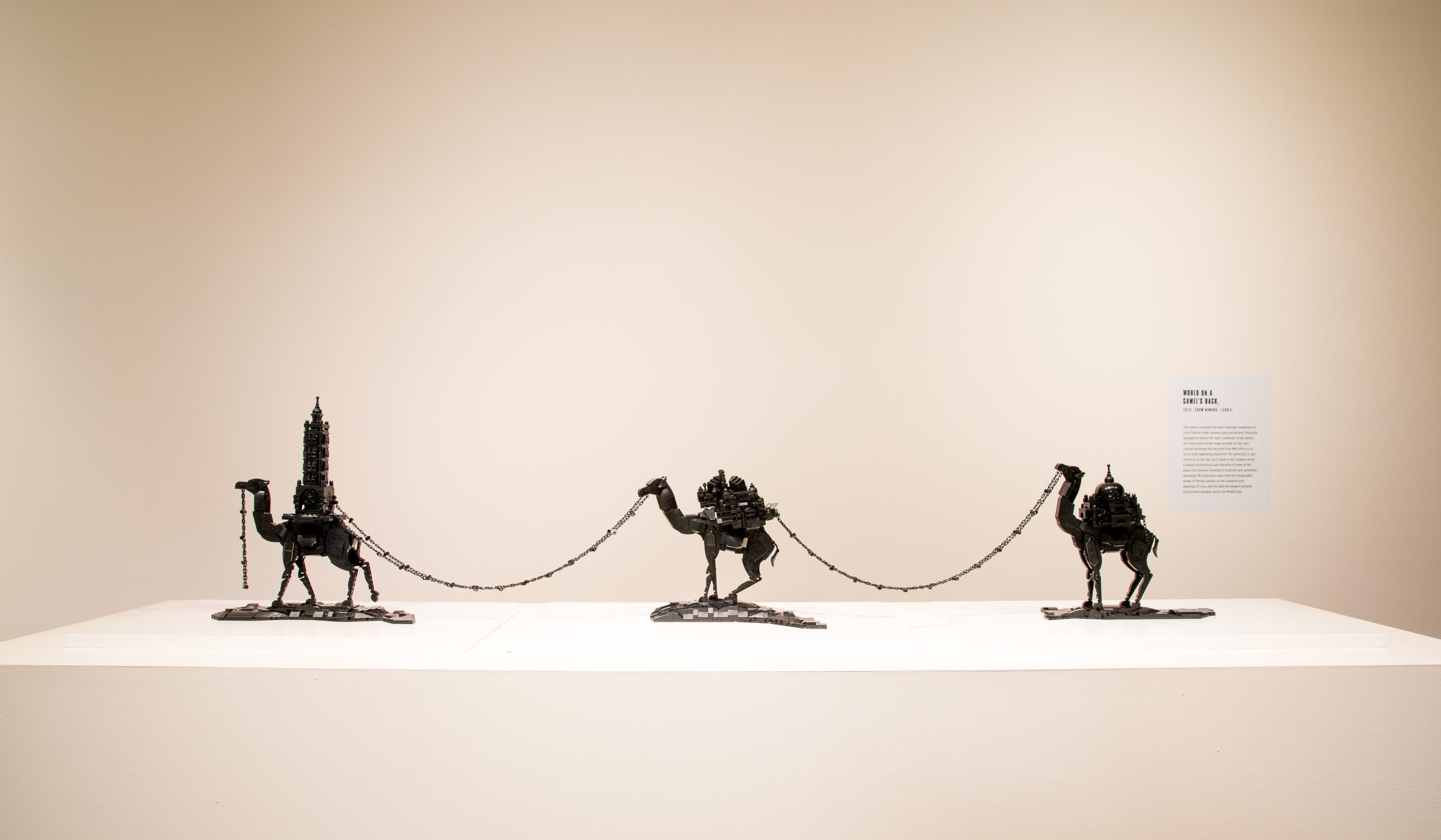 If you’ve seen any of the advertising for Civilizations, you’ll recognize this as the piece that’s used throughout: three very detailed camels, attached by jewels, carrying not only homes, but entire cities on their large humps.

“You can imagine how small people would be to fit in these dwellings”, muses Nimako. “I’m a world builder when it comes to creating art. It’s never about the singular object or the singular intention. It’s always about what is the world that this exists in”.

There are a number of worlds in Civilizations that Nimako draws from and that are portrayed. There’s the Malian Empire of the 13th Century, specifically the Djinguyereber of Timbuktu with A Sacred Place, the world of peril and progress in the Sahara desert with The Scorpion’s Pass, the world of badass women warriors with Beware the Bandit Queen of Walatah, and of course a world of Afrofuturism: Ghana 1000 years into the future with Kumbi Saleh 3020 CE.

Taking 357 hours to create, Kumbi Saleh “represents an uninterrupted, uncooped narrative of Black civilizations that seeks to reclaim histories, reconcile ancestral traumas, and imagine liberated futures for all African peoples”. So fitting considering 2019’s Year of the Return. Black people from across the diaspora (the Caribbean, the Americas, and Europe) visited Africa, Ghana in particular, to partake in year-long celebrations and to connect to their ancestral past.

The name Kumbi Saleh has quite a story of the past meeting the future and of reclamation. Kumbi Saleh is the name of the medieval capital of the Ghana Empire (or Wagadou Empire approx. 300 – 1100 CE) and a major site of the trans-Saharan gold trade. Nimako borrowed it to put a stamp on this future city of autonomy and excellence. 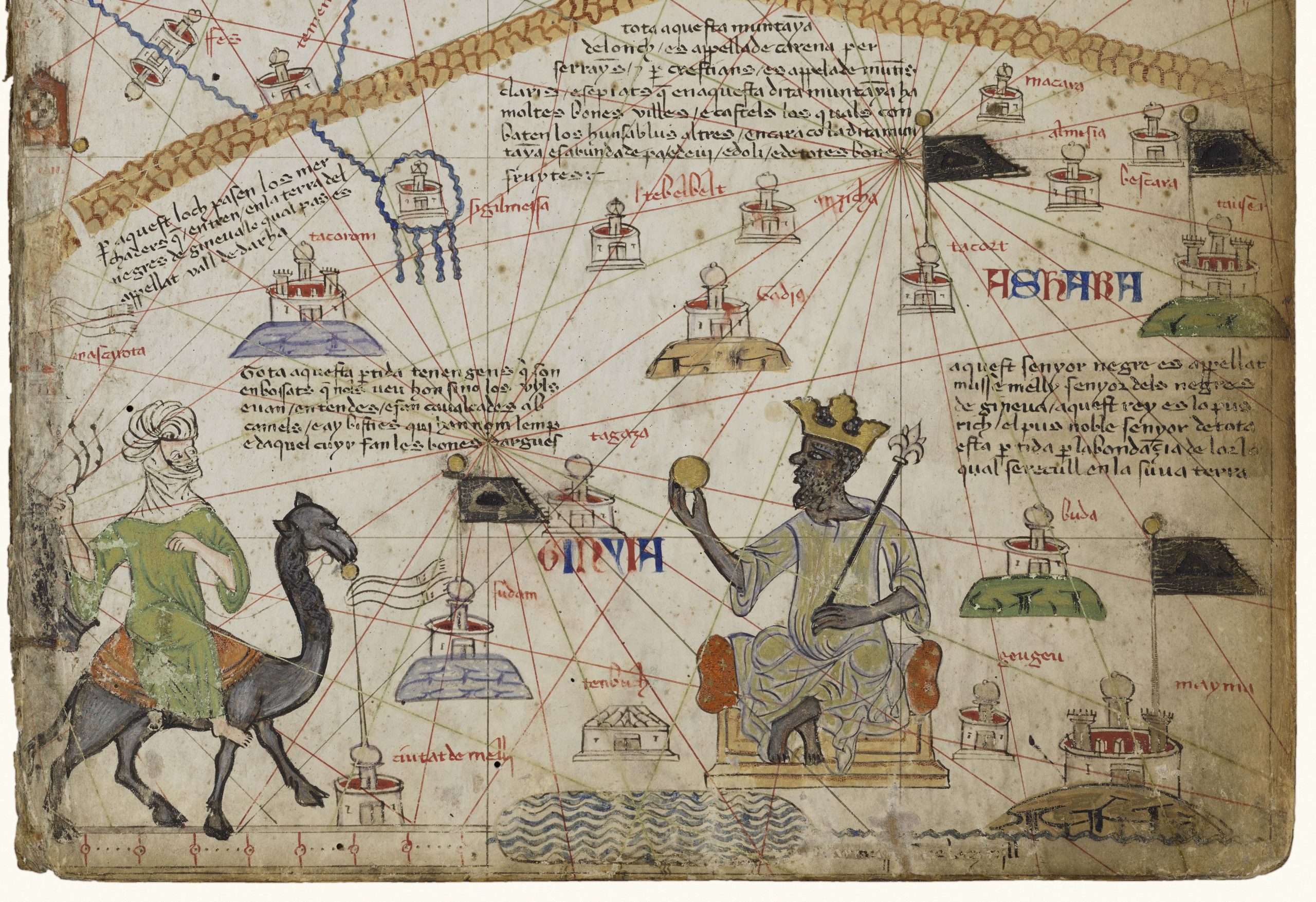 Photo provided by the Block Museum of Art, Northwestern University. 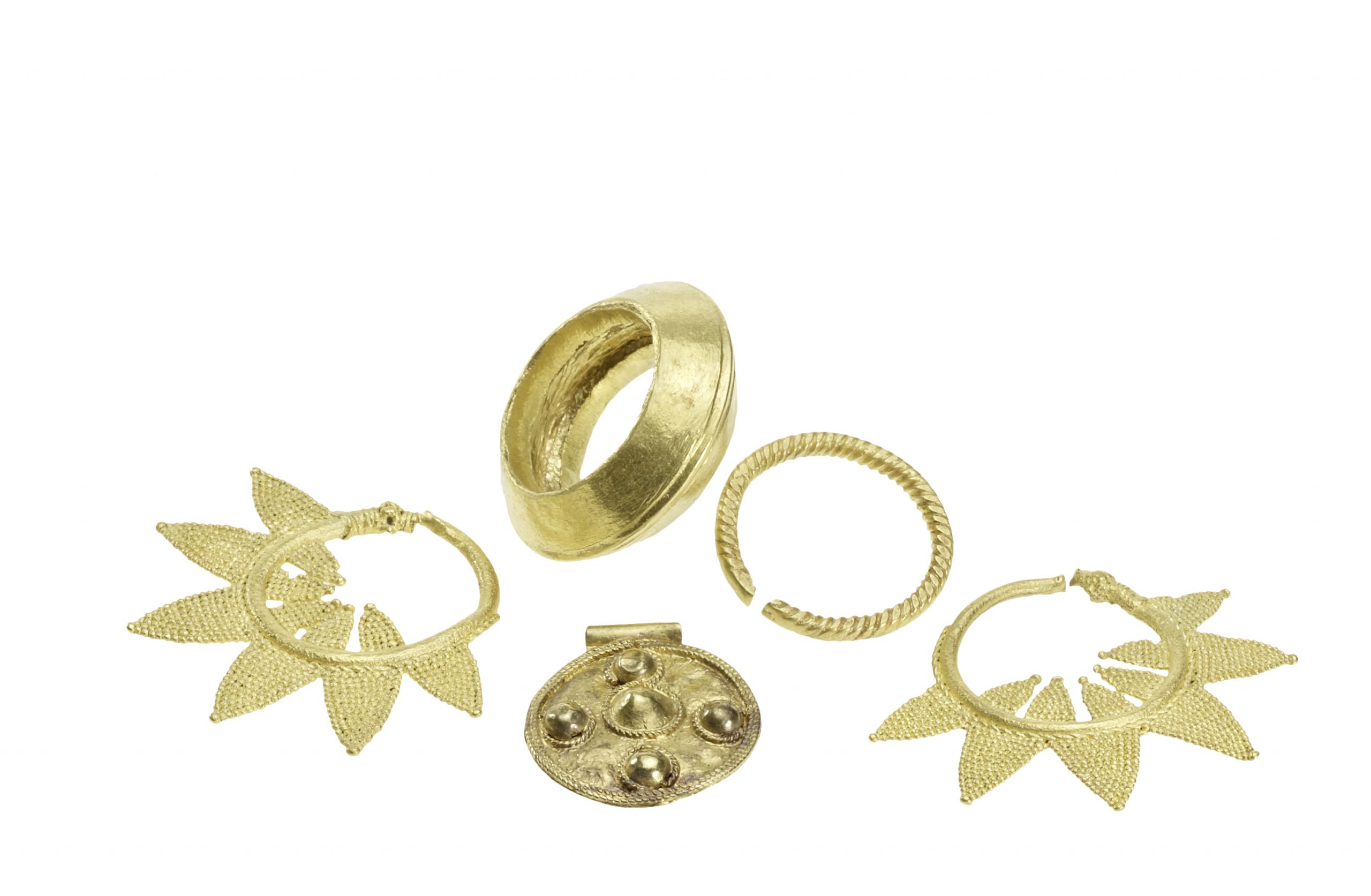 “I wanted to create a utopia”, explains Nimako. “1000 years is so far ahead, but it’s important to think that we’re going to live. We’ll be there. If it’s not us, of course, it’ll be our descendents and we will live on the continent of Africa and it is not going to be colonized”.

In the middle of this utopia, atop where the monarchy would live, is a large Adinkra symbol that means pursuit of happiness, enjoy life. Instead of being a symbol of power or inferring conquest, Nimako wanted something promising for the city. “I wanted the people here to love to see it. I wanted it to be something that would keep people happy and pursuing joy and life and living and happiness”.

During our time together, Nimako was congratulated, and stopped for both a picture and an autograph; a testament to the connection people feel with him and his work and the awe at what he’s done with these tiny familiar pieces.

“You can’t compete with LEGO”, he says with a smile.

As a part of their ongoing support of contemporary art and innovation, the Aga Khan Museum has commissioned Nimako for a very limited run of LEGO kits featuring, what else but a miniature replica of the museum itself.

This is the last weekend for Building Black: Civilizations and Caravans of Gold, Fragments in Time: Arts, Culture, and Exchange Across Medieval Saharan Africa at the Aga Khan Museum. Please visit AgaKhanMuseum.org for more information about this and upcoming exhibits.

To follow Ekow Nimako and his work, visit EkowNimako.com.