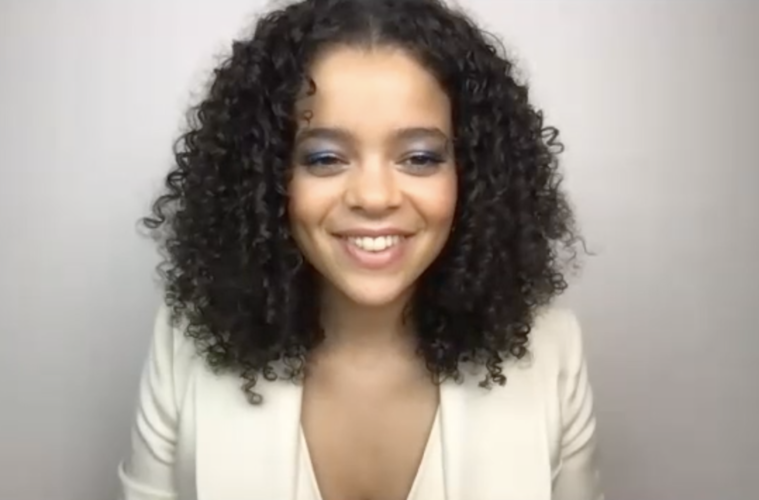 Lydia West, It’s A Sin star, on the honour of playing Jill and working alongside ‘lovely, kind, and gorgeous’ boys to depict a trailblazing but ‘harrowing’ story

It’s A Sin is a five-part British miniseries that follows a tight-knit group of queer friends across the 80s, as they move in together in London and begin to confront adult life’s tribulations when the AIDS epidemic broke in the UK. Crafted by the renowned queer creator Russell T Davies, the series has scored a 5 out of 5 stars review on The Guardian and recently premiered in North America, through HBO Max on Feb. 18th for the US, and Feb. 19th through Amazon Prime for Canada. 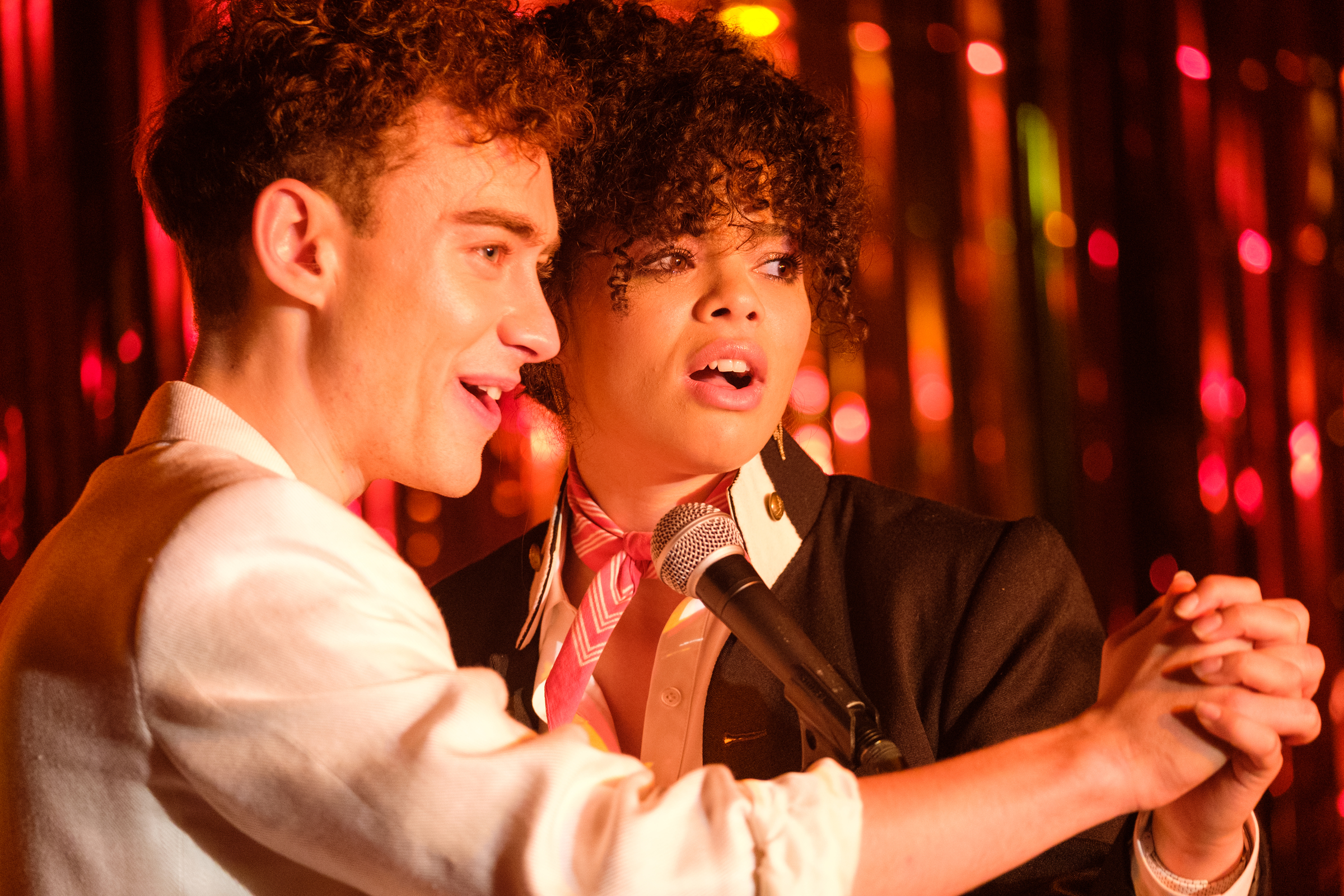 Ritchie, the show’s protagonist, is a young aspiring actor played by Olly Alexander (Years & Years, the band, not to be confused with Russell T Davies’ previous series). After moving to London from the Isle of Wight to pursue his big dreams, Ritchie meets Jill (Lydia West) at their university campus, where they instantly become friends. Their both electric and dazzling personalities fit together radiantly. They later move into a flat –nicknamed ‘The Pink Palace’– with their friends Roscoe (Omari Douglas), Ash (Nathaniel Curtis), and Colin (Callum Scott Howells).

Remarkably, Jill becomes the first one in their group of friends to become deeply involved in the fight against AIDS. The selfless and loving character played by the charming Lydia West does everything for her friends and to help ill men who she doesn’t even know. As fans may probably know already, West’s character was based on Jill Nalder, one of Russell’s closest friends who had a very similar role during the crisis throughout the 80s. Cleverly, Nalder actually plays Jill’s mother in the series.

Currently busy with tenths of interviews about the outstanding It’s A Sin, West’s career has surely begun taking-off. In 2019, she acted in Russell T Davies’ Years and Years sci-fi miniseries, while in 2020 she appeared in Netflix’s latest adaptation of Dracula and in the comedy film Higher Grounds. This year, she has been also occupied filming Suspicion, an Apple series alongside Uma Thurman.

This month, we sat with Lydia to chat all about the series’ production and much more!

Read the interview below, or watch it on YouTube and our Instagram‘s IGTV.

Your series, It’s A Sin, delivers a powerful and new way of telling this story. How did your involvement in the series begin and what was the most appealing about the role?

So, I was first sent the scripts to audition for the role, I was sent two episodes and I received a few scenes, and I went in to read. I first read the episodes and I had to take a moment just to compose myself ‘cause it was so beautiful. Obviously, it’s Russell T Davies who is an icon and I’ve worked with him before and I love his writing and everything that he does so it didn’t take long (giggles), it didn’t take me long to be convinced to go into the meeting. I had two meetings and then I finally got the role.

What initially drew me to the story was that I’d never read anything that was told from a British perspective like it. It was so, so special and so fun and these friendships– from the moment I turned the first page I just remember feeling like ‘Oh my gosh these characters are so, so real. I know these people! And I can connect to them’. I just wanted to be part of that life. So, when I was given the part –when I was awarded the part– I just kind of got straight stuck into it, trying to immerse myself as much in 80s culture as I could and learn as much as I could about the period and about the era, and about what these people could have gone through.

The struggle or loss of someone because of a pandemic, or epidemic in the case of the series, is a very topical subject now. Although they are many different contexts, do you think anyone could also relate to it because of everything happening right now? How does it feel having a series like this one being released during a pandemic?

I think the only similarities you can draw from both the series –the AIDS epidemic– and the current coronavirus pandemic is that they’re both global health crises really, which have put a stop to the way we live our lives. In the 80s it happened with the HIV virus, which then became the AIDS epidemic, which basically made people reconsider their behaviour and really make people question what they were doing and not understanding what was going on really. With the coronavirus pandemic, we kind of went through a similar thing of not knowing or having the information, this whole idea of misinformation and conspiracy and whatever you want to believe in. What’s going on is kind of similar if we look back at some of the things that were going on in the 80s. The way that misinformation was handled, the way the government messages were coming across, it’s all very similar, it’s all kind of not knowing. There’s a lot of scaremongering but I think it’s important to note that there are such stark differences between the two pandemics.

One affects mainly, as a majority during in the time, a marginalized community, and the other affects a mass population, a mass society, so it’s a very different agenda for society and for governments to put a stop to coronavirus. We have an active vaccine within six months of the virus and for AIDS patients that weren’t the case, they had to live for a very long time before any kind of drug cocktails were trialled. So, I think that’s mainly down to –I think– systemic homophobia and another sort of inequalities that were happening to these marginalized communities, so they are very, very different but it just so happens that we are releasing a show in the middle of a pandemic. It just feels very coincidental, but I don’t think there are many parallels to draw from the two. 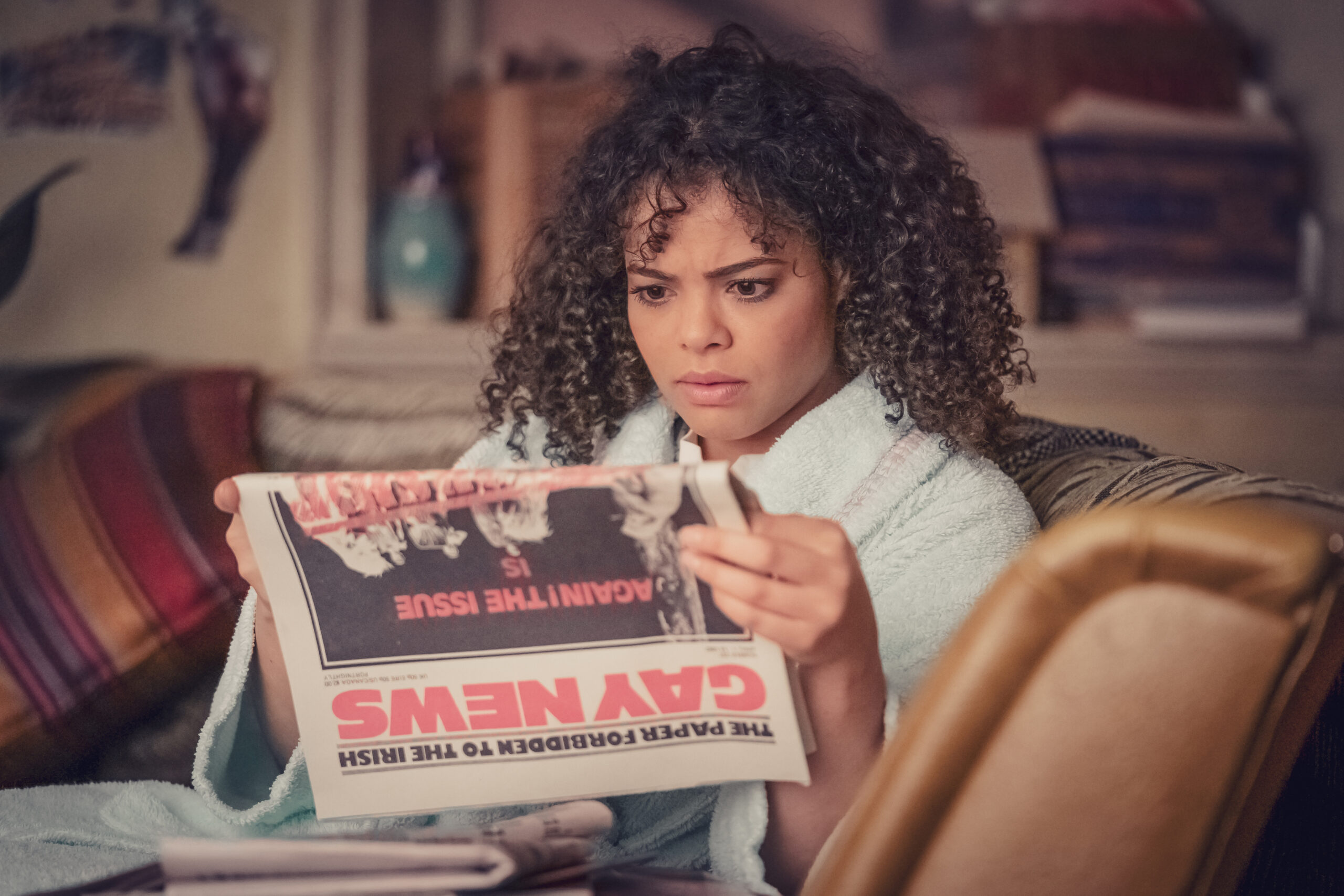 I was just going to say: medical and tech advancements aside, what do you think has changed from society’s point of view towards gay people and HIV/AIDS?

I think we’ve evolved; we’ve evolved slightly. We obviously have mass information now and we are able to identify that HIV is no longer a deadly virus. You can live a very happy, healthy life and be HIV positive and obviously, we don’t face the exact same kind of prejudice and stigma that we did in the 80s. But! we still have a long way to go with the perception of the virus, with the accessibility of information of the virus and just reducing that stigma and shame and prejudice that still kind of surrounds the virus. We have to work on banishing that completely and educating people. I think –I hope– that It’s A Sin will do that to a few people, will educate younger generations. It’s very accessible, it’s very easy to understand, it’s entertaining, so it’s educational. So, hopefully, we can make a change, a little bit of a change with the show. I think we’ve come on leaps and bounds but we’re still not completely where we need to be with the HIV virus and AIDS.

Your character exhibits a duality key to the show since, on the one hand, she was working as an actress and having a good time with her friends, but, at the same time, she was taking care of Gloria by herself and later many more infected men. Talking about emotions, how did it feel to tackle this duality?

It was very challenging as an actor to put myself in the position of caring for these men and nurturing and loving them, and they’re very easy to love and care for but you also feel a huge amount of sadness when they were going through what they were going through, the way they were treated, it was harrowing and very, very sad. But Jill exists and Jill is real, and Jill is in the show and she’s a strong character who is just brave and courageous and a true ally. She just has so much compassion and love for her friends and everything she does is from a place of love and care and yeah, that was quite easy to play. Especially with all those boys ‘cause they’re all so lovely and kind and gorgeous.

Jill was such an amazing character, truly, and admirable as well. What was your favourite thing about her?

I think my favourite thing about Jill is just her strength. She’s so strong. Throughout the years she becomes so wise. And she starts at eighteen. Imagine, in their 20s, their early 20s, all their friends are dying, and they have no access to information, and they don’t know what’s going on and what’s happening. There’s no clarity. And to have that strength in such an unknown time, in such a scary grey area of not knowing what’s happening or what’s going on, is just really admirable and I think I’d like to be more Jill in that sense, I’d like to have that strength because that strength is just so brave and beautiful.

If she could have her own stand-alone series after everything that happened, what would it be about?

Oh! Maybe about her life in musical theatre (chuckles). Maybe backstage Jill, what Jill does backstage, and it explores the [theatre] show. What she does when she’s not on stage performing. It could be a reality TV show (chuckles again). 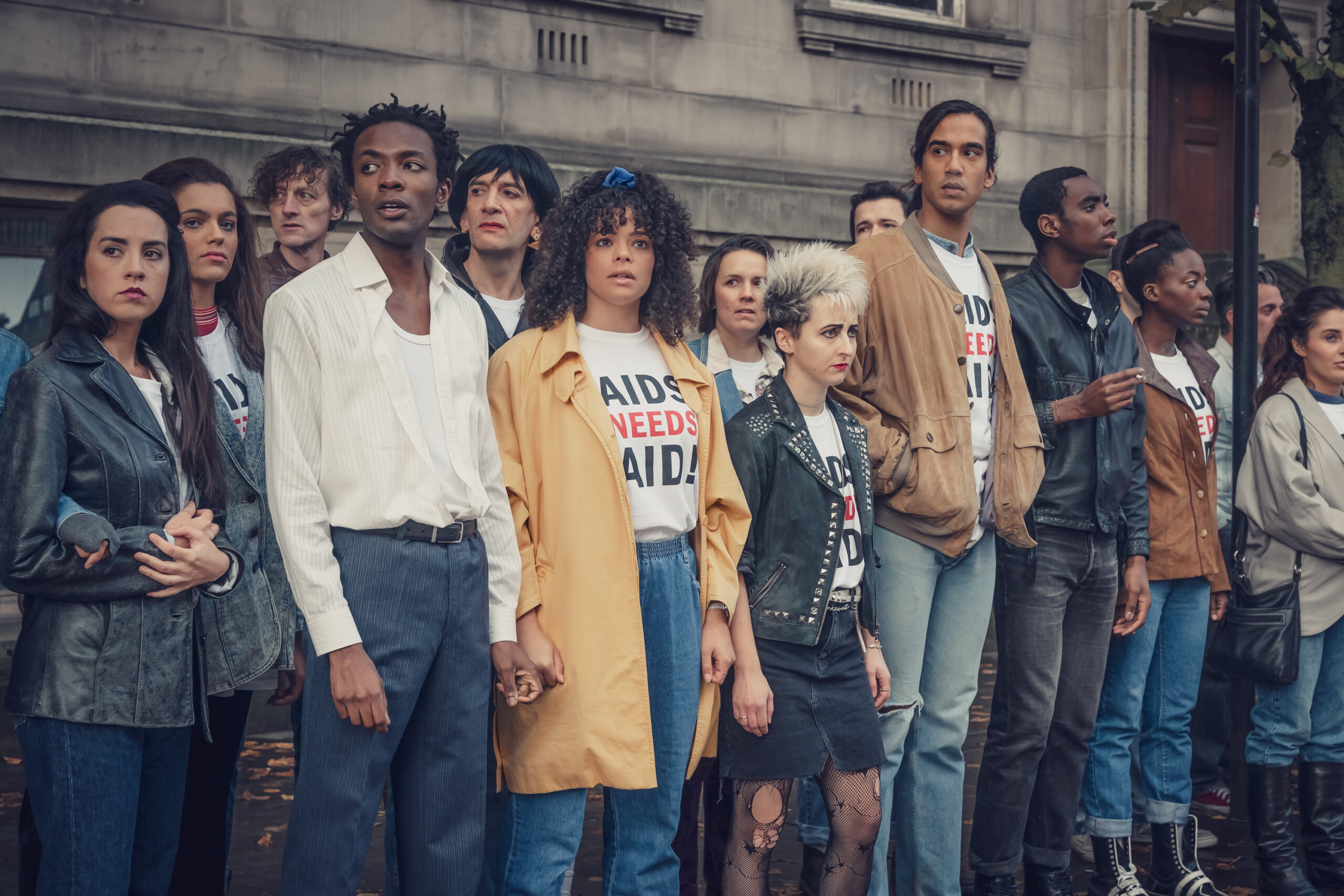 Besides Jill’s monologue about shame in the last episode, what would you say could be another key takeaway from the series?

I think this universal kind of understanding of logical family, of this idea of the chosen family so important in the queer community. So often people aren’t accepted for who they are by their biological family. They’re forced to change, they are not accepted for their identity, so if we could take anything away is that this idea of chosen family is so important and it saves lives and it keeps people strong and it keeps people positive and it is a home away from home that people can go back to and feel loved and feel nurtured and feel cherished and feel their truths. So yeah, I think it’s important that we shone a light on that because it is so important in the queer community that we have this chosen family.

How does it feel to be part of a project that represents something that was so taboo and controversial 40 years ago, a show that would have never been made 40 years ago?

It feels so special, and I feel like I have been awarded– I feel very honoured to be have been selected to tell such a story. I am happy that we can communicate this on screen and through this story we can hopefully change lives, we can educate, we have done a public service. It feels very special, and I feel very grateful to Russell, to all the creatives and to everyone that watches at home, and that feels anything– if you feel anything, I’m very grateful to you.