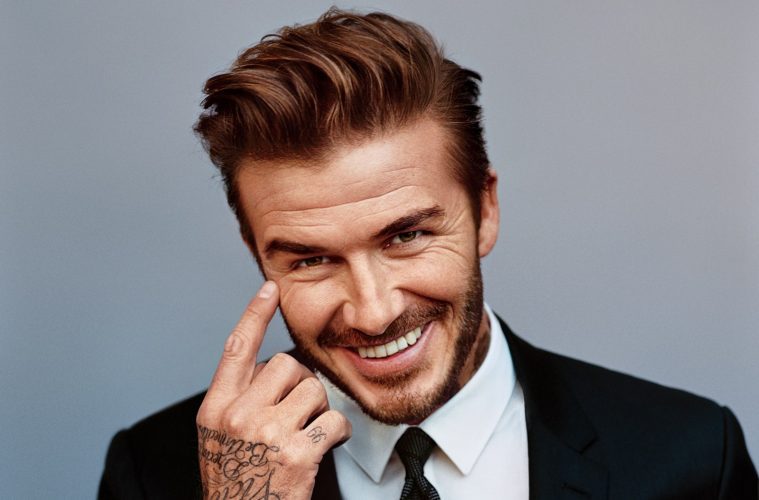 David Beckham’s appearance off the pitch has overwhelmed his career on the pitch throughout his life, and how can you blame him when he’s rocked up with iconic outfits that have become fashion statements over the years?

Victoria Beckham, his wife, has played the refinery role in revolutionizing Beckham’s eye for fashion. His style has been about maturing over the years by gracefully sleeking it out, working in tandem with Victoria. His development from the baggy clothes that were trendy at the time, to suits tailored perfectly for his athletic appearance is something to ponder. Having a head of hair as good as Beckham hasn’t hurt the global superstar either. 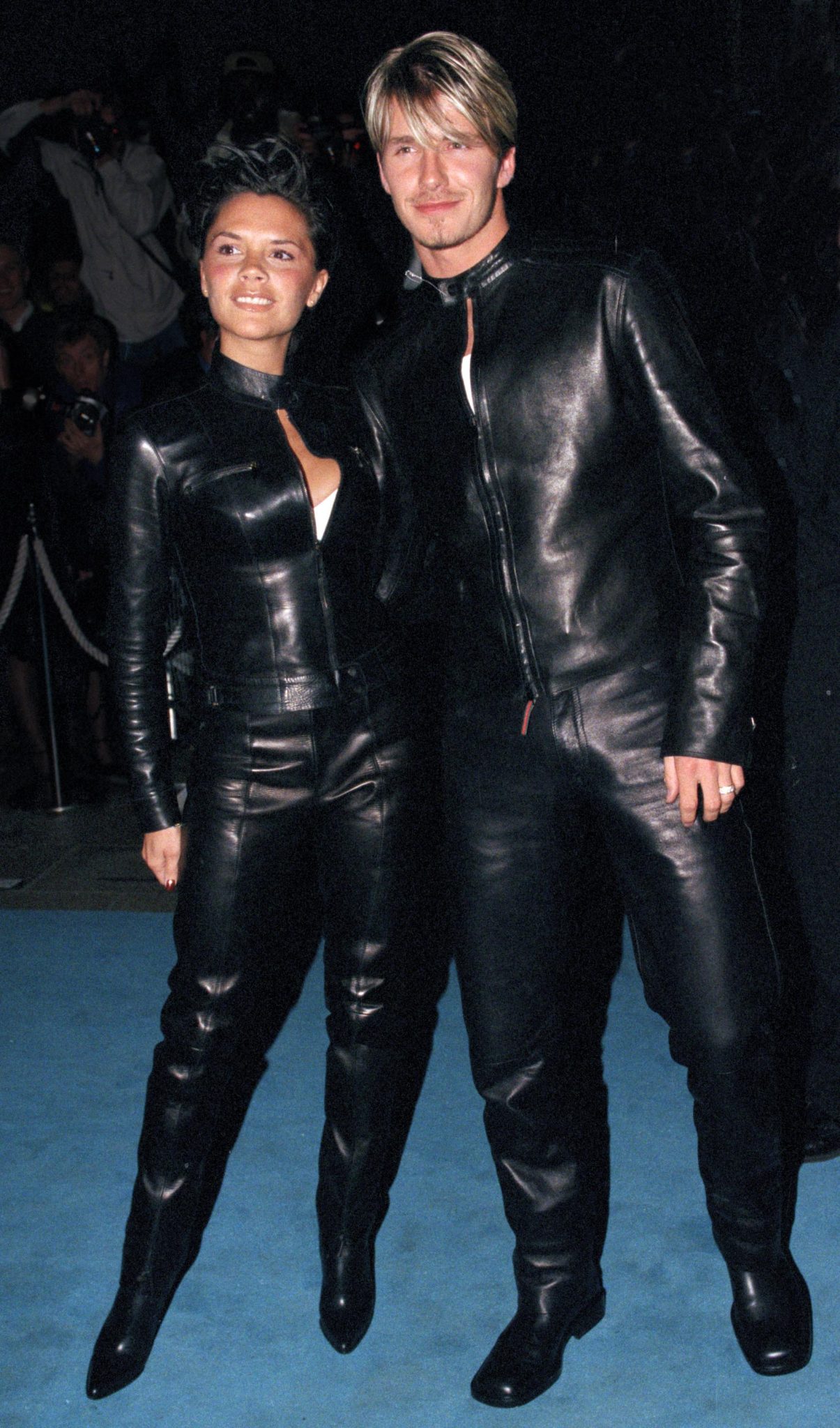 Here is David Beckham during his tenure with the Soccer team Manchester United in an all-black Versace leather outfit during his exuberant youth. The outfit barely fits him properly with straight-fitted pants and a jacket too large for him – the evidence is in the arms of the jacket. To top off this extravaganza, Beckham decided to go with black leather shoes as well. The blonde schoolboy bangs and charming smile is the only pleasing thing about Beckham’s look. 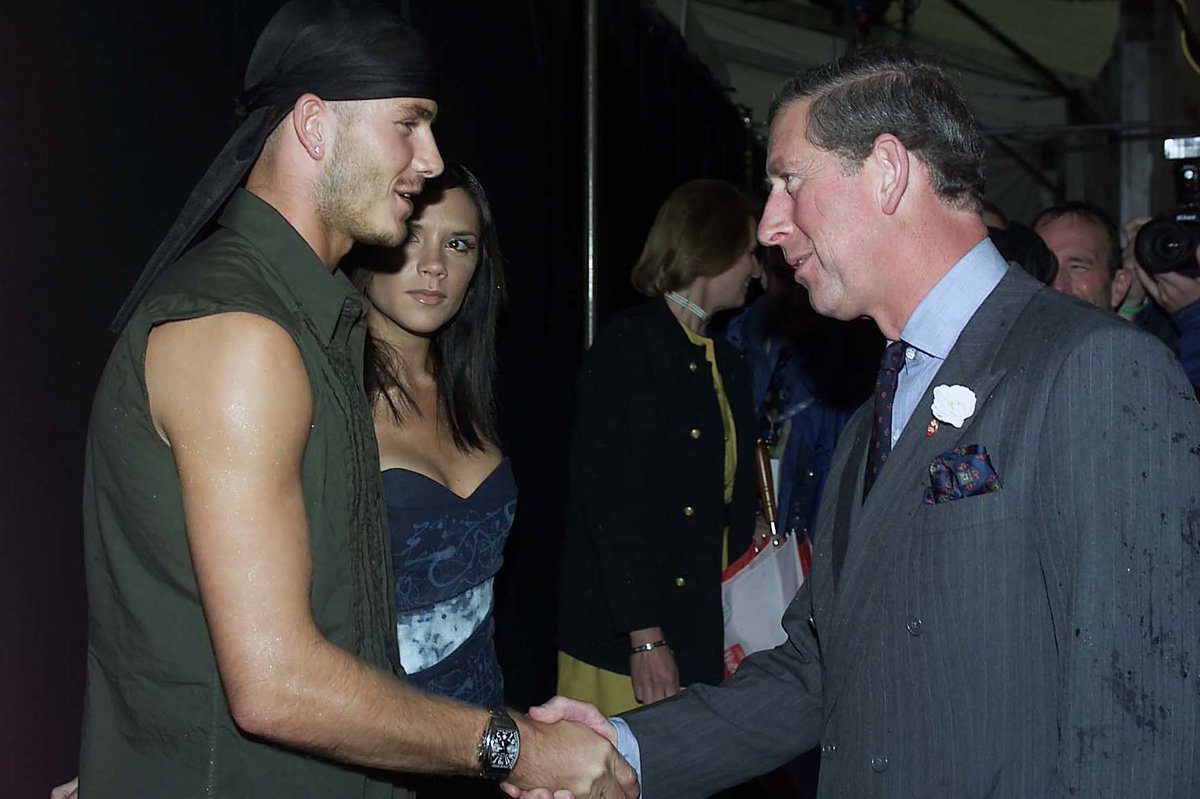 Picture this: You get told that you are about to meet Prince Charles. Spending sleepless nights picturing the cleanest and most well-fitted suit to impress the prince would be completely normal. Normality for the Spice Girls’ husband was wearing a sleeveless collar green embroidery shirt with a black durag. As you can see, Beckham didn’t shy away from the occasion, as he firmly shook his majesty’s hand by looking straight into his eyes with THAT costume. 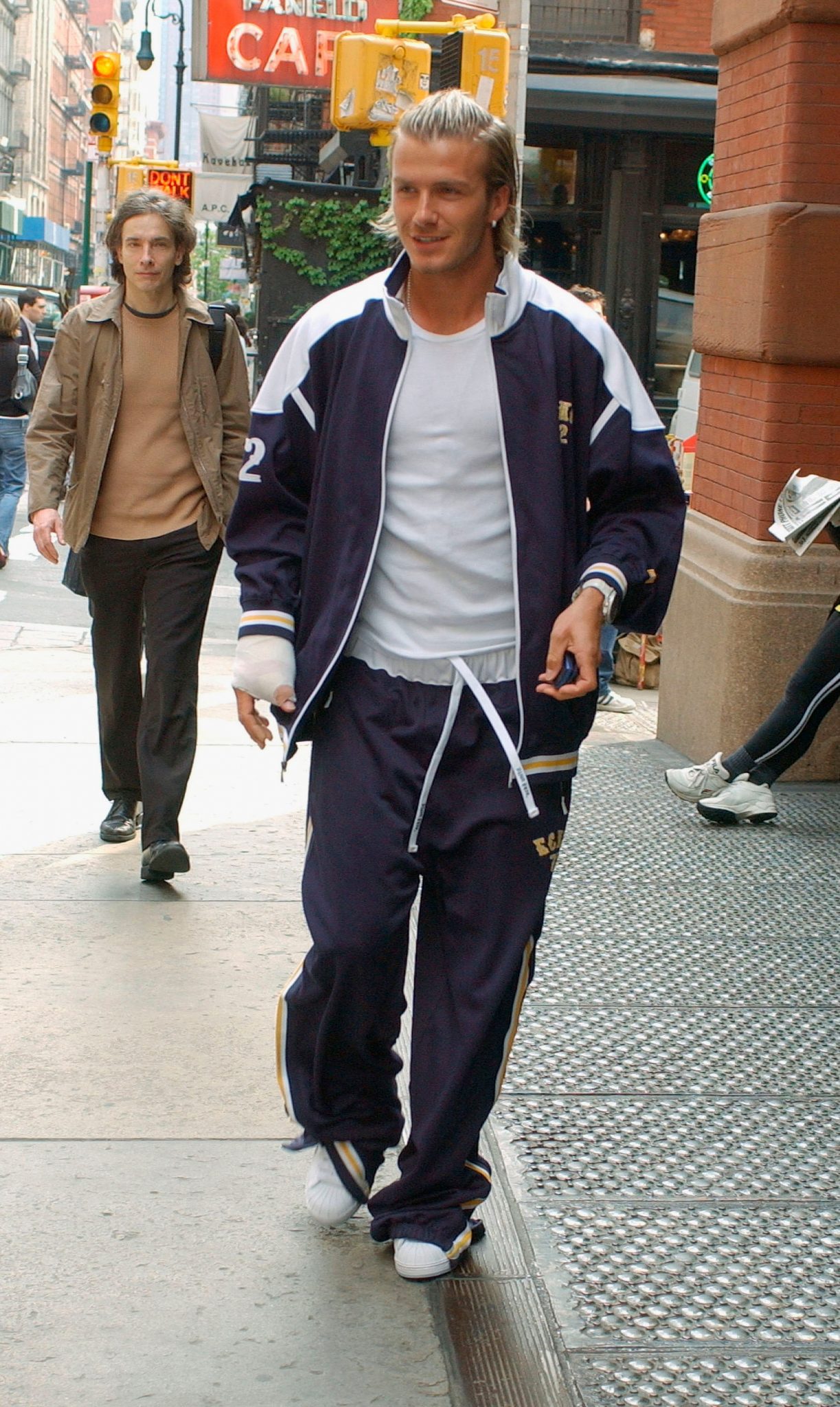 Beckham’s streetwear consisted of sporty tracksuits, tracksuits that were baggy enough to fit 2 more people in. As you can see, Beckham’s tracksuits bottoms are covering his shoes because of how oversized they are, with the drawstrings dangling about. The oversized tracksuit jacket can be given a pass. The outfit is topped off with Beckham’s long hair, which is tied from the middle. The most shocking thing about this is not the size of the fit, but the fact that Beckham looks good in it. 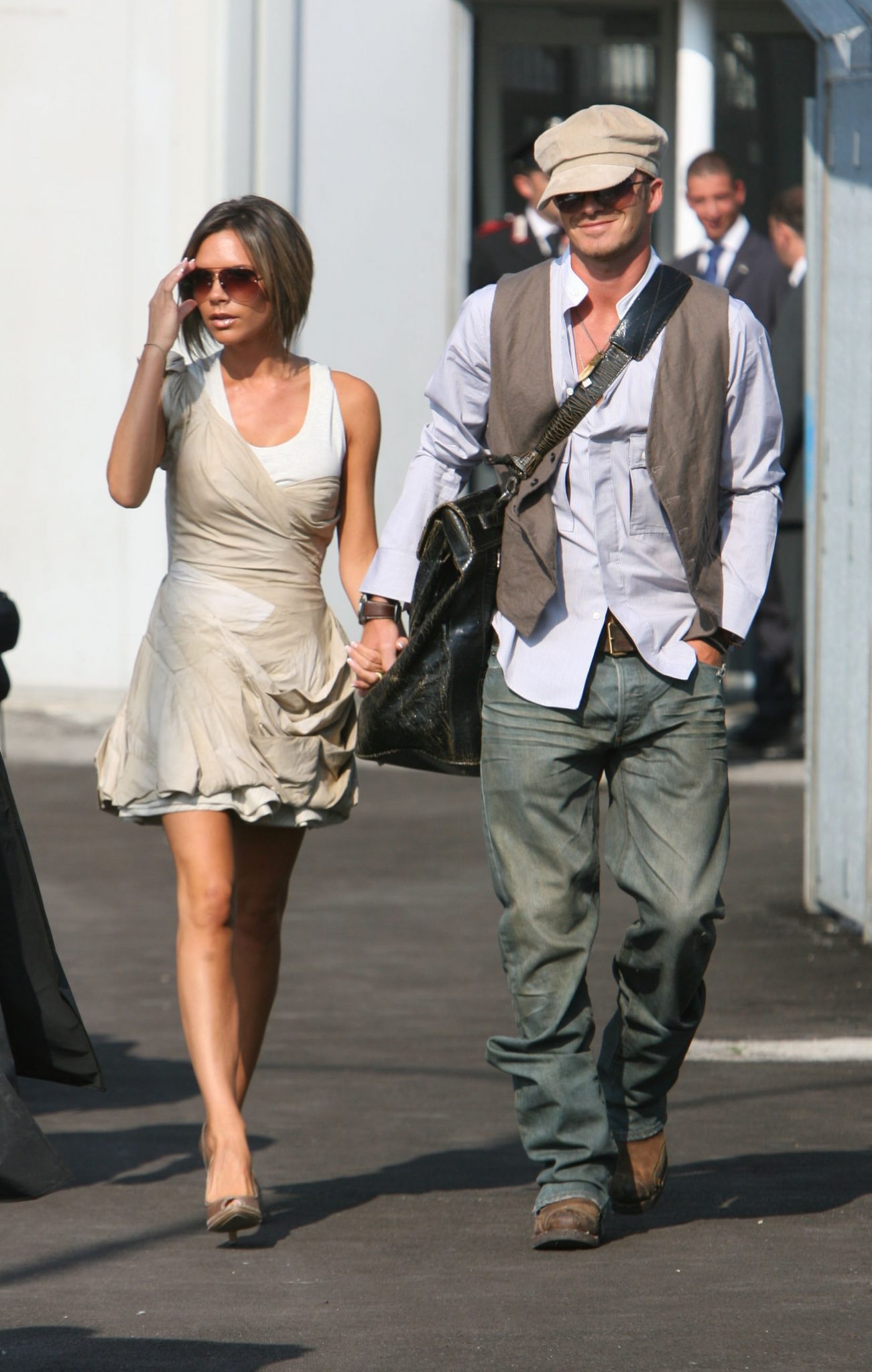 Beckham is seen here holding Victoria’s hand in an interesting choice of outfit. During this time, Beckham was playing for Spanish soccer giants Real Madrid, as he strolled down in baggy green jeans covering his shoes again with a brown belt. The midfielder is wearing an un-ironed sky blue shirt with a waistcoat too small for him, topping it off with a beret. How the midfielder managed to pull off these outfits as well as he did will always be a mystery. 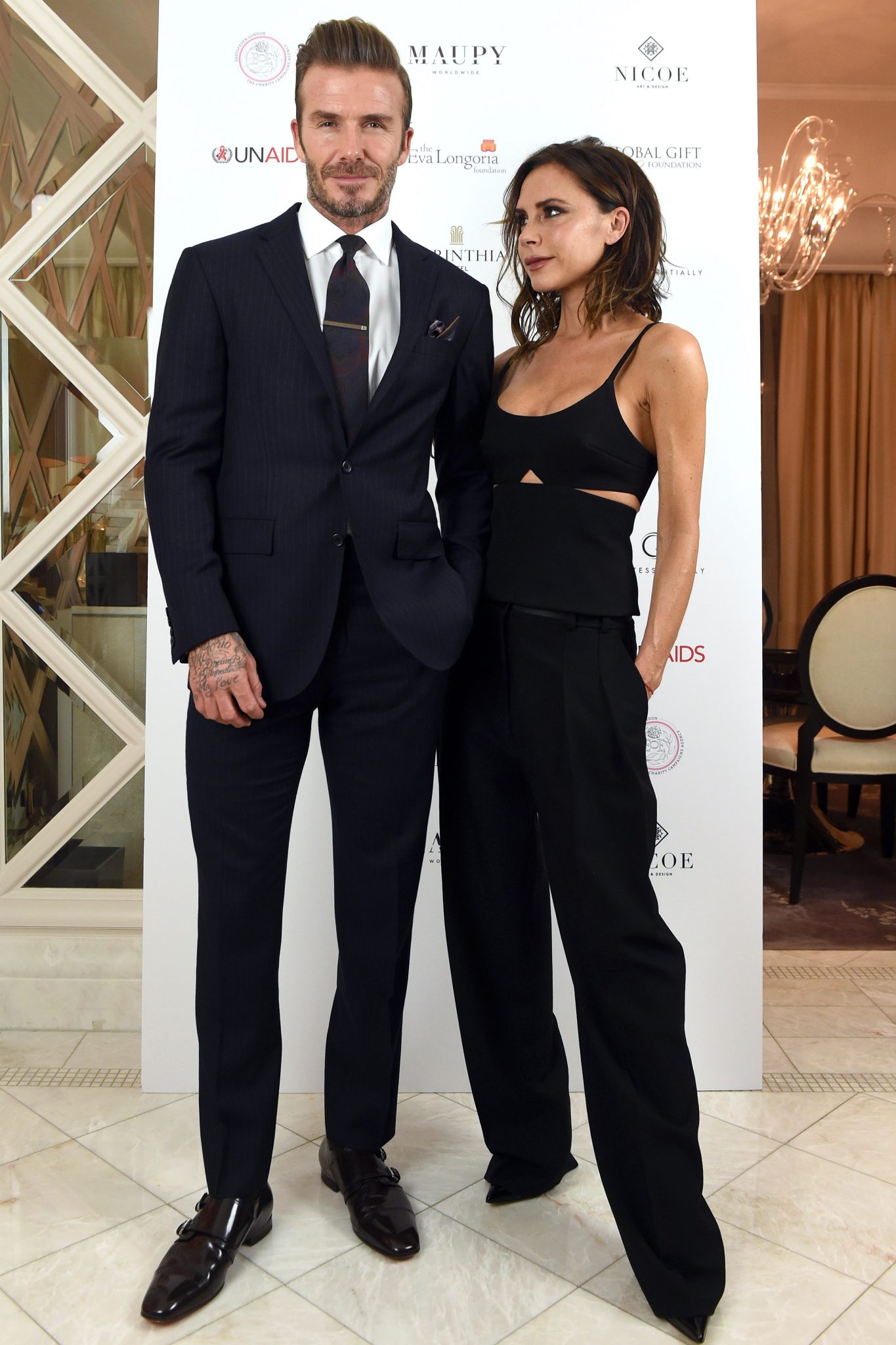 The evolution of Beckham’s style peaks in the 2010s with him now retired and living comfortably from the millions he made and continues to make. He is pictured here wearing a navy-blue suit measured to perfection, with the bottom hem falling right under his ankles. His clothes are well ironed, and his hair has cleaned edges with a lovely combover to put the cherry on top. He continues to experiment with this style on the street as well, pulling up with long coats and great cuts. The funk and spry are long-gone, but the elegance and timeless suiting are ever so present in his current wardrobe.