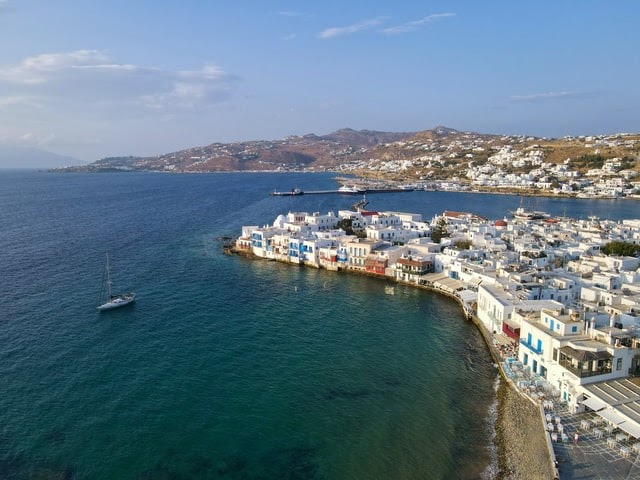 Top Foods To Try in Mykonos

Mykonos is a top dream destination for many world travellers. With pristine beaches, azure waters, and traditional windmills dotting the island, it’s little surprise that so many people hope to make this their regular summer holiday destination. There truly is something for everyone on the most popular of the Greek islands, and that includes the food tourist.

Let’s look at some of the foods you definitely shouldn’t miss if you’re visiting the island of Mykonos.

Kopanisti is a cheese from Mykonos that can compete with the finest of European cheeses. It’s a thick and creamy cheese that can be spread, and is sometimes referred to as the Greek Roquefort. It’s yellow-pink in color, with a peppery and intense flavor.

Kopanisti is made from sheep’s milk, or a mixture of sheep’s and goat’s milk, and takes four months to produce. It’s most often served as an appetizer or spread on bread. If you want to take some home, your kopanisti will keep for up to a year after the date of manufacture.

Lazarakia, which translates as little Lazaruses, are traditionally made by Orthodox Christians on Lazarus Sunday, which commemorates the resurrection of Lazarus and the beginning of Holy Week. Essentially, these little handmade biscuits are coated in sugar, cinnamon and raisins and shaped in the form of a shrouded man.

On this day every year, you can find Lazarakia in every bakery, street corner, and just about anywhere else. They could even be for sale right outside your Villas in Mykonos, if you’re lucky.

Amygdalota is a traditional sweet with a distinct rose aroma and almond flavor. They are molded into an oblong shape and on the island of Mykonos, as opposed to the other Cycladic Isles, they are baked. This results in the pleasing combination of a hard exterior and a soft inside. They are regularly seen at festivals and public celebrations.

Rafiolia are sweets made from fried dough, sugar, orange, and honey, often sprinkled with cinnamon. The dough is usually stuffed with Tirovolia, another one of Mykonos’ famous cheeses made from either sheep or goat’s milk, or a mixture of the two. The taste can be on the sour side, and they are best consumed as fresh as possible.

You can also find savory versions of Rafiolia with herbs or onions on top.

Mostra was originally a word in the Mykonos dialect for the measurement for rusks. Mostra is simply made from large barley rusks spread with Kopanisti cheese, and topped with diced tomato. It is then topped with olive oil, oregano, and capers. Depending on the season, sometimes grapes are used instead of tomatoes.

There are many reasons to visit Mykonos. Many choose to visit due to the allure of the beaches, the history, or the quaint charm of a small town on a beautiful Mediterranean island. There is something for everyone, including families with children, couples, honeymooners, and solo travelers.

Food tourists are sure to leave satisfied as well. With a vast array of delicious cuisine, both sweet, savory, and everything in between, Mykonos is a veritable gourmet food lover’s paradise. From local cheeses to local pastries, your palette is sure to be thoroughly inspired on your trip to Mykonos.