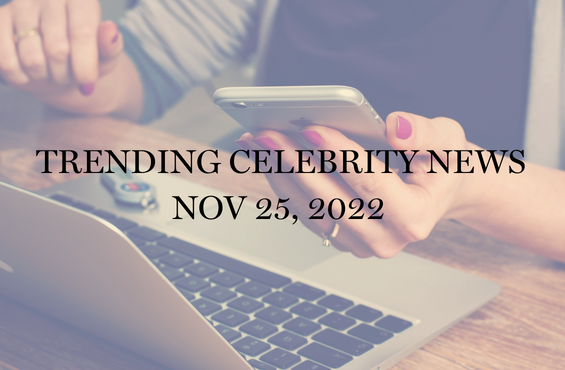 A quick roundup of the top stories trending in celebrity news today (November 25, 2022).

The Coles note version of all of the latest celebrity news the internet is talking about today.

Kim Kardashian is receiving a lot of backlash online for not speaking out about Balenciaga’s use of children in their disturbing bondage-themed campaign. Balenciaga has since pulled the campaign. Kim who has a history of working with the fashion house, has not addressed it to her 334 million followers on Instagram. But that hasn’t stopped the comments from flooding in such as, :”Would like to see a comment about balenciaga before seeing this. Your silence on this is topic deafening.”

Prince Harry and Meghan Markle pose for a photo with poet Amanda Gorman ahead of Thanksgiving while they’re dealing with a dilemma over accepting a human rights award. The couple is due to receive the Ripple of Hope Award for their stand against “structural racism.” But it’s not without controversy as they it could deepen tensions with the Royal Family. There has been a number of backlash online with people saying they shouldn’t accept the award at the December 6th event held by the Robert F Kennedy Human Rights Foundation.

Kanye West releases a series of videos for his 2024 Presidential Run. Ye has released his a number of videos on Twitter in the lead up to him attempting to run for President for a second time. In the video, he reveals that Donald Trump had some rude things to say about Kim Kardashian but did not disclose what those things were. Watch the video here:

Chinese-Canadian pop star Chris Wu has been sentenced to 13 years in prison for rape and eliciting a crowd to engage in sexual promiscuity. Beijing’s Chaoyang District Court was handed a sentence of 11 years and 6 months for raping a woman in 2020. He was also given 1 year and 10 months for a 2018 event in which he assaulted two women and assembled “a crowd to engage in sexual promiscuity”.

‘I’m A Celebrity Get Me Out Of Here’ COVID Drama

Just days before the final is set to film, multiple members of the crew have contracted COVID. The series is due to end this Sunday on November 27th. There are five remaining celebrities in the jungle; Jill Scott, Hollyoaks’ Owen Warner, former rugby player Mike Tindall, MP Matt Hancock and comedian Seann Walsh.

Comedian and TV Host Nikki Glaser has revealed her identity on the Masked Singer, after dedicating her performance to Bob Saget. Nikki Glaser who performed under the alias of Snowstorm was voted out on last nights episode. Two female singers now remain, the Harp and the Lamb competing for a chance to win the Golden Mask Trophy.