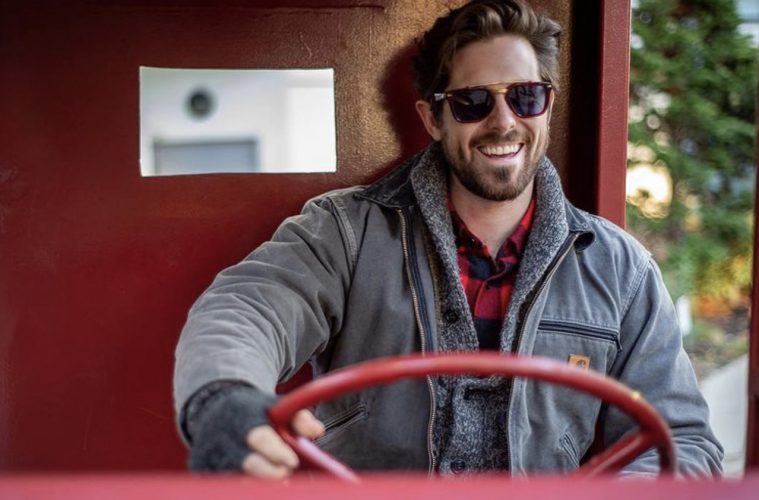 With a passion for the outdoors and a love for his rescue pups, this west coast native is the sweet, funny guy next door.

You may know the Canadian actor Chris McNally as the Hallmark guy with the great hair, beautiful eyes, and signature beard. Perhaps he sailed onto your screens as Tom Hastings, the charming and adventurous captain in Sailing into Love. Maybe he captured your heart as Lucas Bouchard, Hope Valley’s saloon owner with a mysterious past in When Calls the Heart. 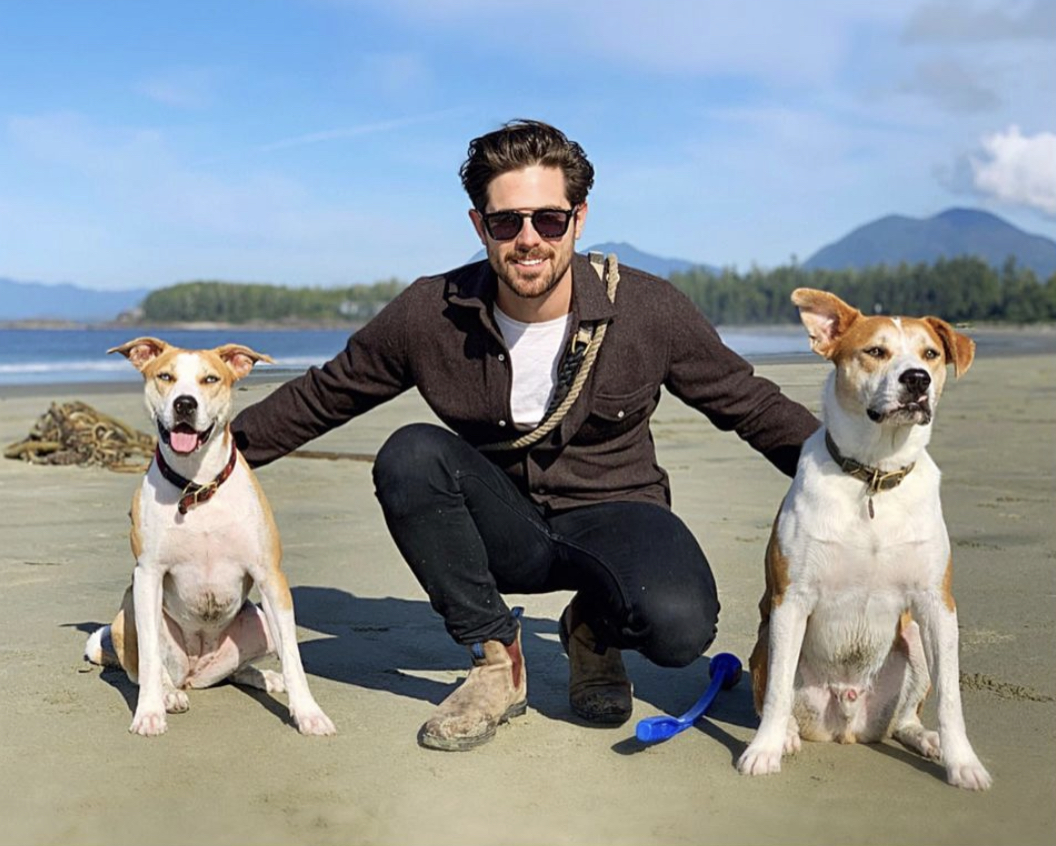 Though I describe this talented gentleman as the guy next door, it might be more fitting to describe Chris as the guy in the campsite one over. Finding solace when he’s exploring the great outdoors, his love affair with the natural world stemmed from his childhood, growing up in British Columbia.

“I’m really into camping and hiking, always have been,” he tells me. “I just like being in nature. It’s a needed reset for me a lot of the time.”

This outdoorsman is at peace when he’s camping atop his Adventuremobile—a 4Runner equipped with a rooftop tent. You’ll find him under the stars, glass of wine in hand, two rescues beside him. That’s his happy place. 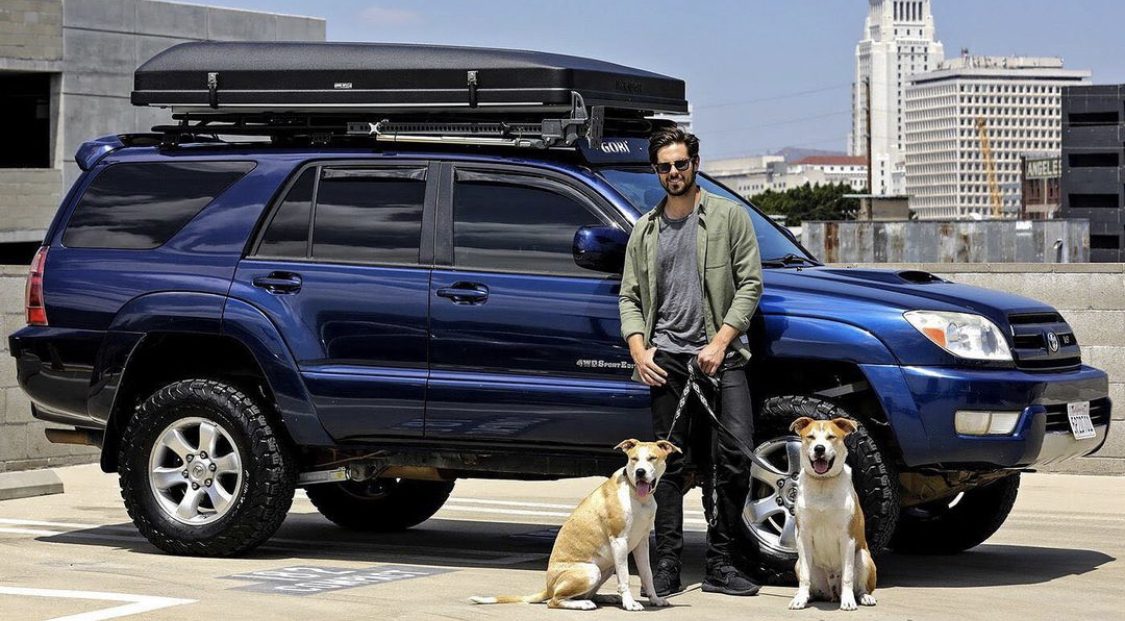 With Season 8 of When Calls the Heart wrapped and set to air in 2021, I caught up with Chris while he’s on location filming a new movie. The humble and kind actor talked about his experience playing Lucas Bouchard, filming in Canada, and much more.

How has it been filming in Canada?

I love filming in Canada. It’s beautiful. I’ve been lucky enough to film in multiple places around the country, As a Canadian myself, it’s always been a pleasure to explore here.

Do you have any favourite local places or hangouts that you’d like to shout out? This can be from a past shooting location or just from your everyday life. 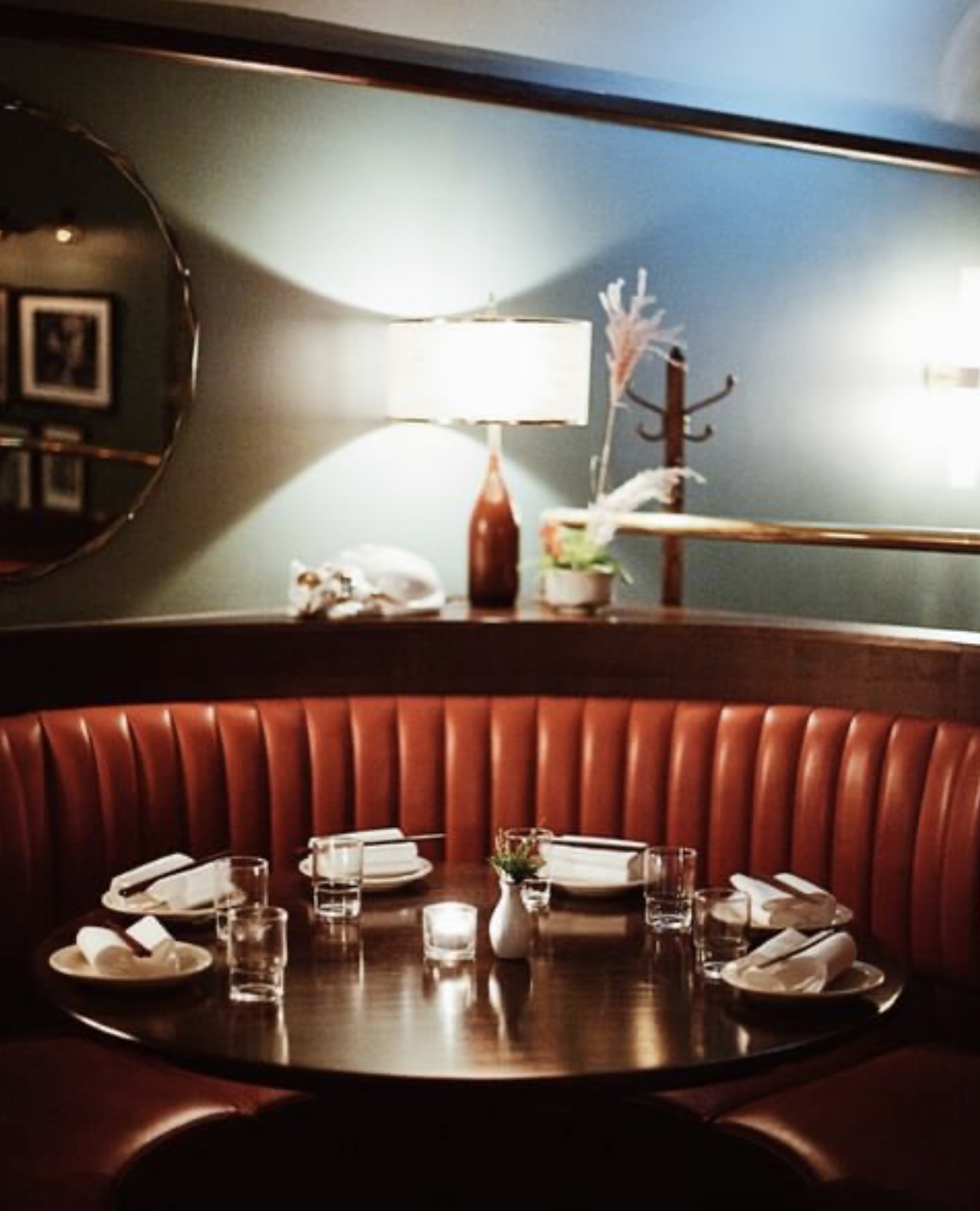 There’s this restaurant in Vancouver’s ChinaTown called Kissa Tanto. Definitely a favourite. Everything from the atmosphere and aesthetic, down to the food is incredible.

You also are quite the host and have been stirring and shaking up some cocktails this COVID quarantine. What has been your favourite one? 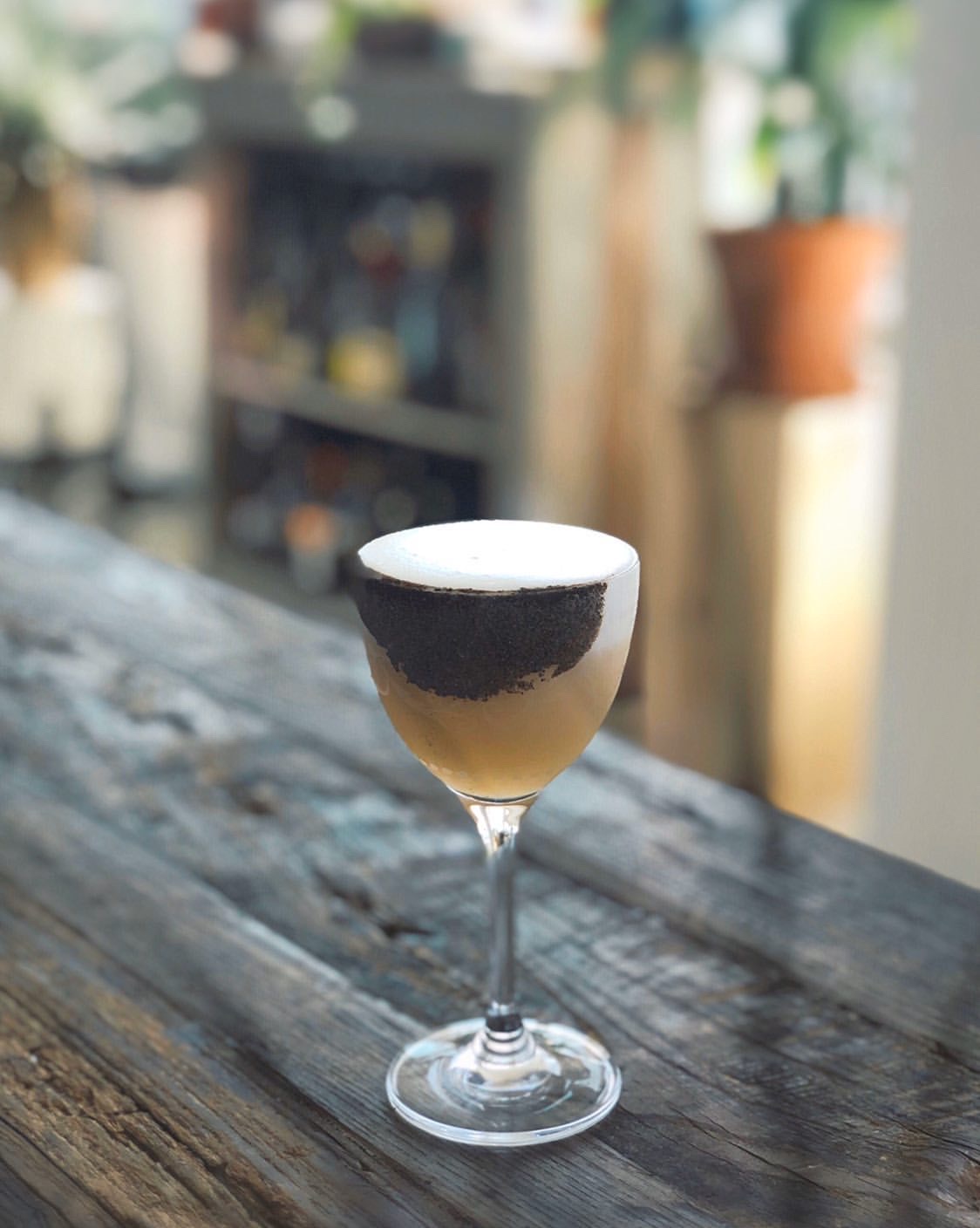 It is Amaretto, plum wine, Dry vermouth, lemon, and an egg white dry-shaken together to emulsify the egg white. Add ice and shake again.

The rim is dusted with this blitzed, dehydrated plum. When you rim the glass with lemon juice and this tangy plum dust, it reminds me of an adult version of Fun Dip. Same kind of flavour profile, only with actual ingredients.

You’ve played in an assortment of different films and shows. Which character would you say is the most like yourself?

I’m actually playing one right now that I feel is quite like me. His name is Noah. He runs a B&B, which I do not, but he does love the outdoors.

I’m really into camping and hiking, always have been. I just like being in nature. It’s a needed reset for me a lot of the time. In that same sense, I know that is important to Noah as well.

I also love that his B&B is in Banff. I love Banff and think it’s stunning. Ultimately, I think our values are very much aligned.

In another way, we’re both very stubborn. Both can be quite hard-headed. Oh, and I think we both try to be funny and fail, but end up being funny accidentally.

Being a Hallmark actor, I have to ask, are you a Christmas starts immediately after Halloween guy—or do you wait until December?

American Thanksgiving is my rule.

I have to wait until American Thanksgiving and then start. Though, I definitely have had my Christmas tree up for 6 months in the past. 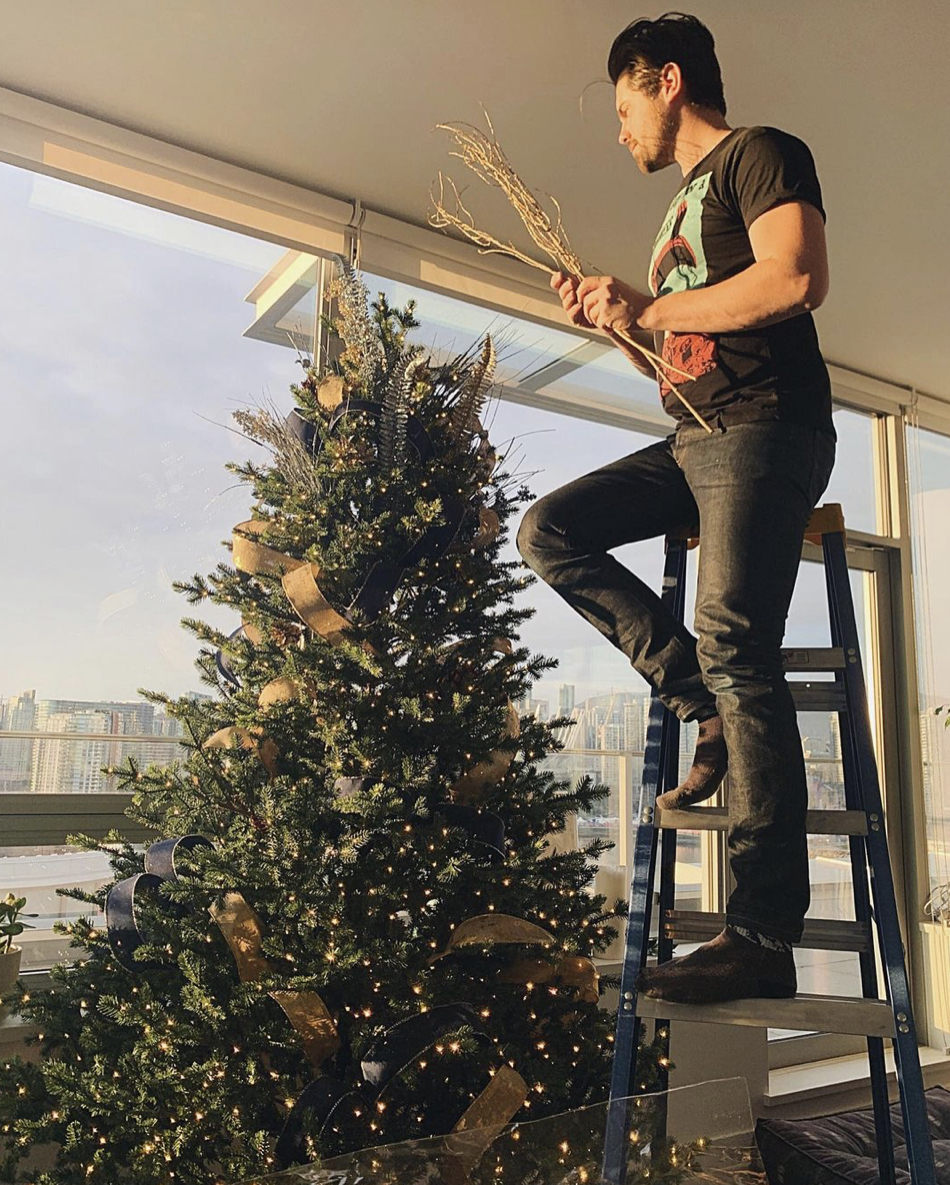 I put the tree up and decorated it. I totally nerd out with that kind of thing. I love decorating the tree and the house and once it’s up, it just looks so charming and feels so peaceful, warm and inviting. So, January hit and I was like I’ll just leave it up. Then in February, I thought it’s still nice. Then July or August hit and some of my friends were like, “this is embarrassing, you have to take this tree down.”

I boxed it up and when I went to unpack it a few months later for Christmas again, it fell apart! It had been opened for so many months that the joints of the branches had cracked and it all came tumbling down. I had to get a new one. I don’t think they’re meant to be up that long [laughing].

Where has been your favourite place that you’ve taken your Adventuremobile?

My top spot so far would have to be Big Bear, California. In Big Bear, they’ve got these things called Yellow Post Sites, which was a new concept for me because we don’t have those in British Columbia. 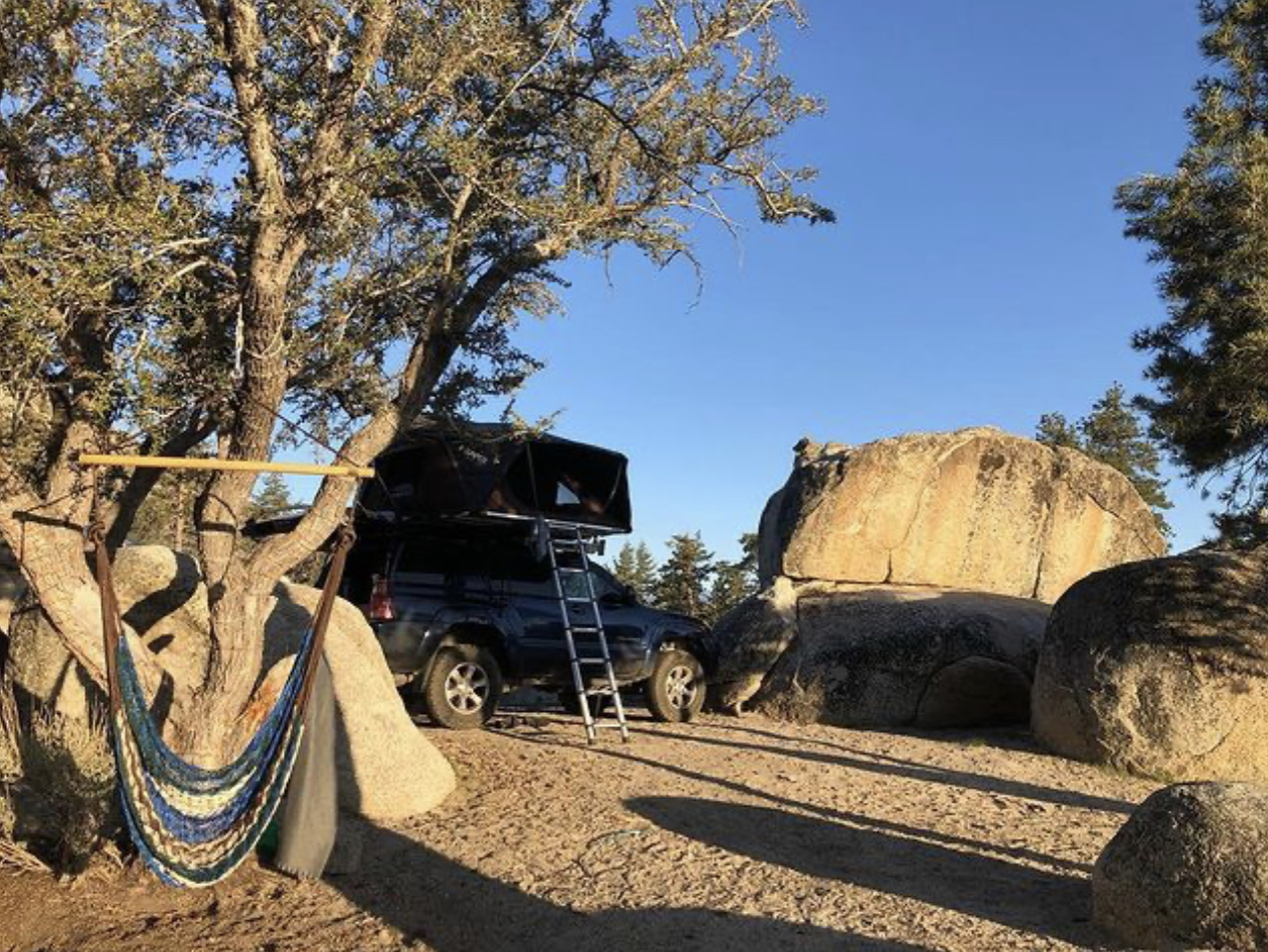 Essentially, they’re individual campsites, fixed up with a fire pit and picnic table, but that’s it. There are no facilities or anything like that. They’re all spaced out—very far apart—and you have to access them via forest service roads. You end up getting a campsite that’s completely isolated. You have all the privacy you could ever want.

You joined the cast of When Calls The Heart in Season 6, alongside Kevin McGarry, who plays Nathan, your competition when vying for Elizabeth’s heart. How did it feel joining an ensemble that had quite the fanbase already—the Hearties? 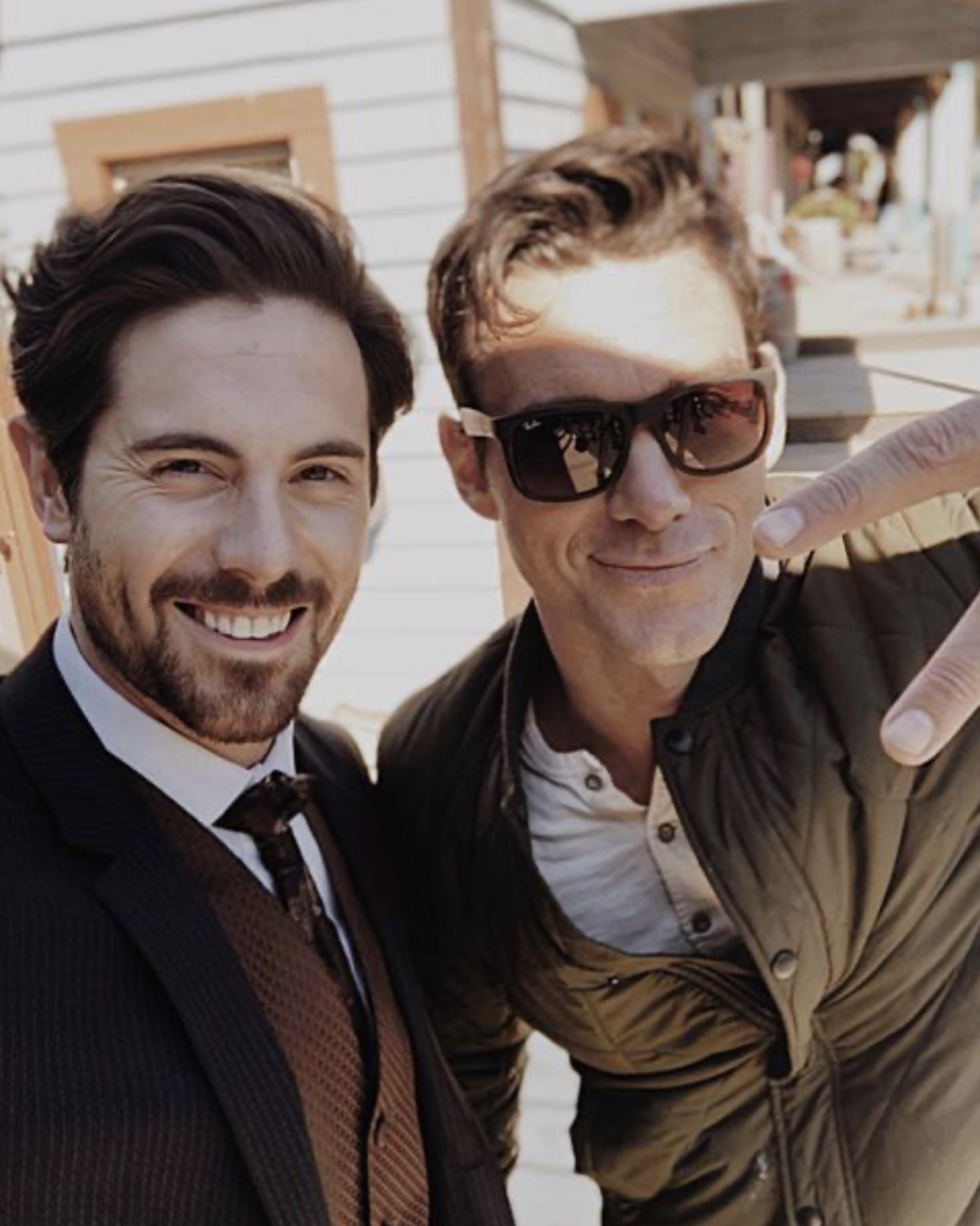 It was slightly nerve-wracking at first. They loved Dan Lissing who played Jack Thornton for the first five seasons so much. When stepping into a series with an already established fanbase, you really want to do well by them. Making sure that I did a good enough job for them was incredibly important to me, as well as a bit intimidating.

That being said, once we became involved with the show and fans were being introduced to Kevin and I through social media, they were extremely welcoming. We felt very supported and accepted by them right off the bat. It was great.

I feel like the Hearties are one of the most dedicated fan groups out there. They truly care about the show. It’s fantastic because without them, the show wouldn’t be going this far.

For someone who hasn’t seen When Calls the Heart, give us an elevator pitch on the show and why they should catch up on it before season 8 premiers in 2021. 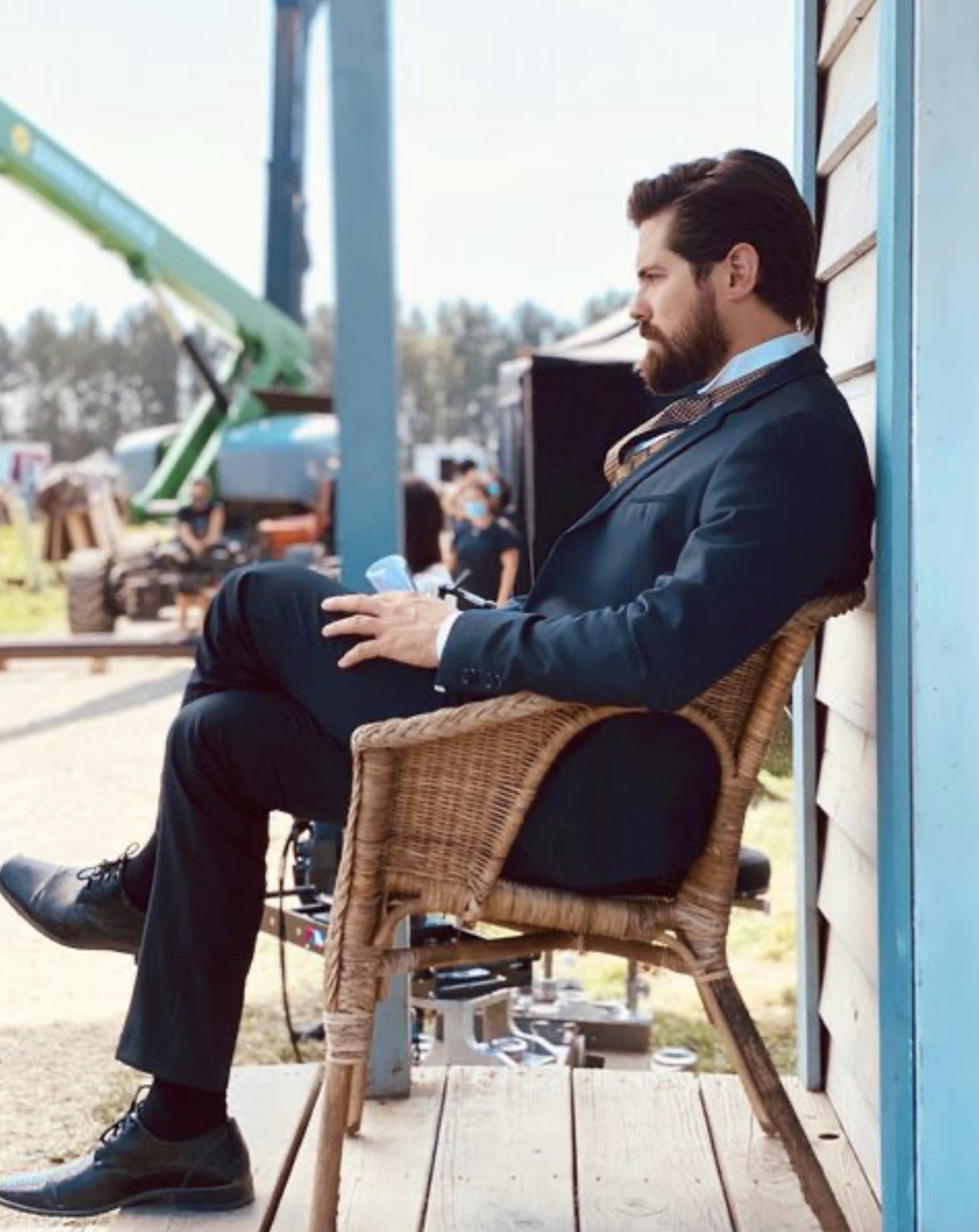 Okay, elevator pitch. It’s about a woman from the big city. She comes to a small Frontier Town to become a teacher. She’s awful at it. Terrible. She’s trying to find her way and ends up finding love. Unfortunately, that is taken away from her in a very traumatic and sad incident. You should tune in before season 8 because there’s two new guys—I know one of them and am friends with the other—and you get to find out which one she chooses.

Yes, you definitely do know one of them! Give us your elevator pitch on your character and convince us why we should be Team Lucas. 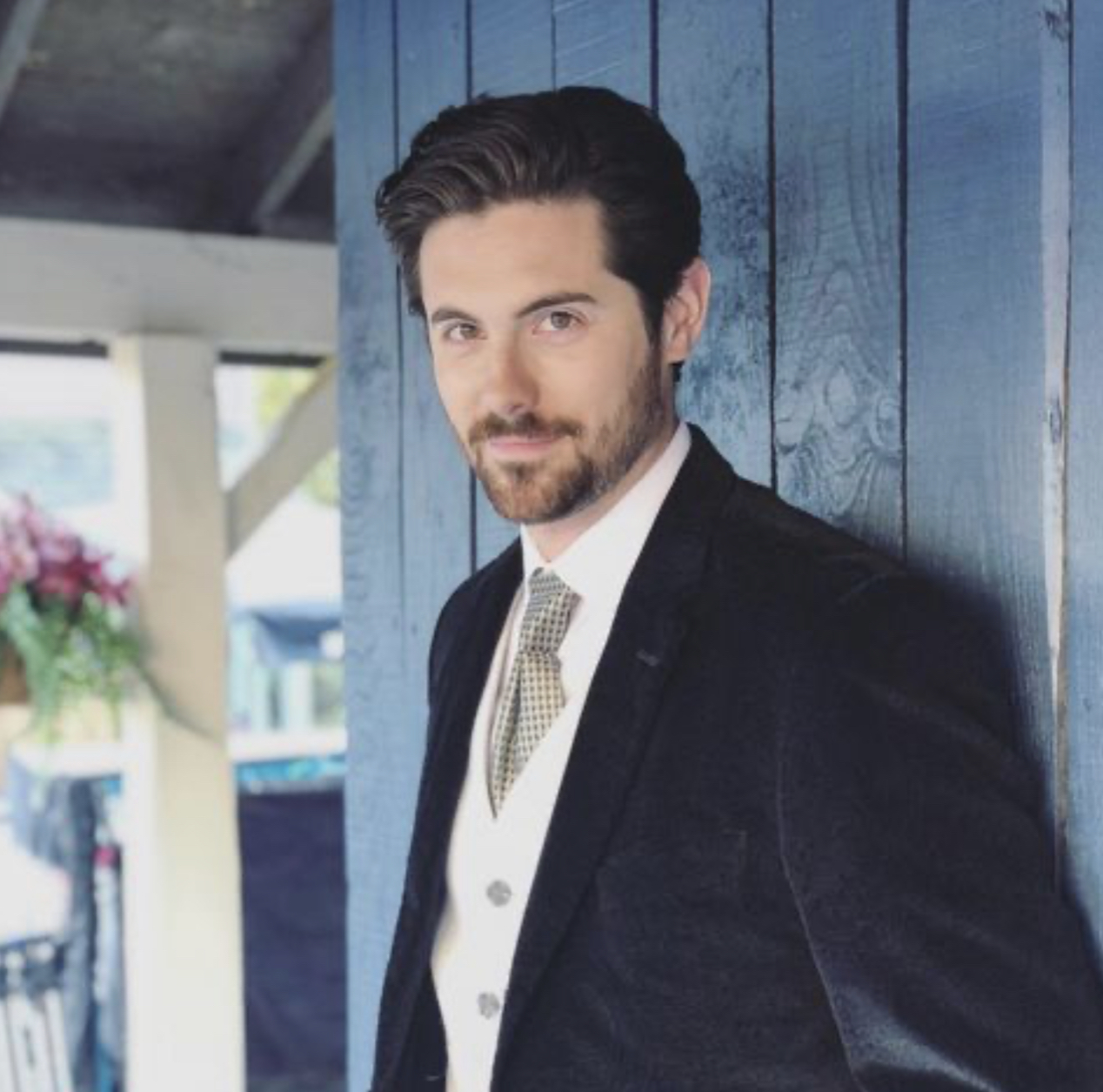 I think you should be Team Lucas because he has a sense of adventure with a hint of mystery. He loves to have fun and is well educated. He’s really just a charming, well-intentioned, well-travelled guy, who pushes Elizabeth to be a better person. Challenges her to grow. Also, he respects her more than anything in the world.

How has it been filming during the pandemic?

I think we were all pretty nervous, initially. It felt odd with these new rules—strange to not be able to socialize freely. We also get along really great as friends outside of work. I love to host people and oftentimes, the cast would be over at my place hanging out. To shift that mentality was difficult at first.

Even seeing everyone in masks, getting tested regularly, and keeping a distance from everyone felt strange. It also really slowed down the process because you can only have a certain amount of people indoors at a given time.

So, filming definitely felt different, but I will say, we acclimated fairly quickly. Several weeks in, it no longer felt like anything crazy. It was just the new normal. I know that even in the extracurricular time, our cast and crew were being really careful as well. We were all very, very grateful to still be working and with all the new measures, we also felt all the more safe.

Do you have a favourite memory from filming and can you share it with us?

This is not a tremendously exciting story, but I really look up to Joel Kinnaman. I loved his work on The Killing.

I worked on Altered Carbon and to get to be in the same room as him was super cool to me. We had a scene where he burst into my apartment. He grabs me by the shoulder and smashes me into the countertop. Basically, just beats the shit out of me.

They had a stunt guy for me but I insisted I do it myself. I grew up teaching martial arts and competing. That was a big part of my life and it had always been a dream of mine to do some sort of action movie. So, anytime the character I’m playing has any sort of combat, I ask if I can do it myself.

Usually the stunt coordinator will be hesitant but will let me try it out in rehearsals. Then, once that goes smoothly, they’re all for it.

Anyways, after a couple of takes, I was rubbing my shoulder. The stunt coordinator comes up to me and asks if that’s where I hit the counter. I was like, “no—it’s just where Joel grabbed me.”

He laughs and goes, “yeah, he’s got heavy hands.”

What martial arts did you study growing up?

I taught and competed in taekwondo. I was a 4th degree black belt. Then I moved onto boxing—recreational.

If you were not an actor, what would you be doing?

I really love interior design and architecture. That’s what my parents do. But you know what, sometimes I want to be a politician. I always want to change things. I’ll think, why is this thing this way, it should be that way, to the point where friends of mine are just like, “we’ll just call you the mayor.”