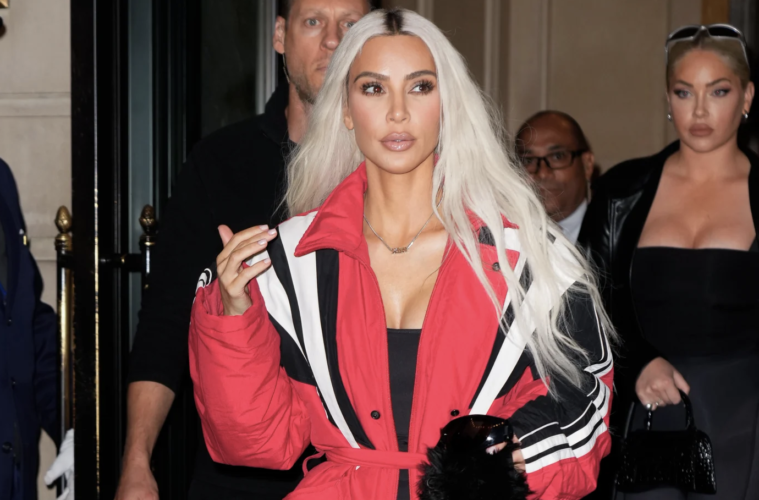 Balenciaga recently came under fire for promoting a new holiday campaign. The brand’s high-profile ambassador, Kim Kardashian, recently broke her silence on whether or not she would continue a future relationship with the brand following the scandal. 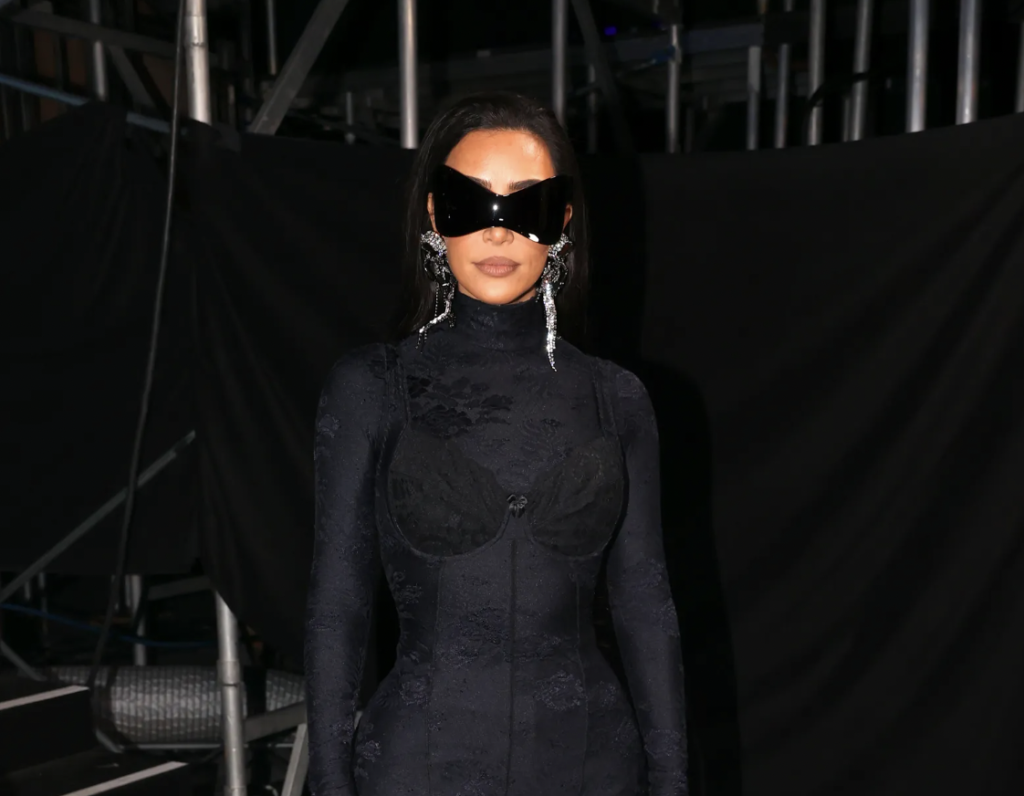 Balenciaga is facing public backlash for promoting a new holiday campaign that saw child models posing with bondage teddy bears alongside fetish imagery and references to child pornography. After coming under fire for the scandalous ad, the brand immediately pulled the campaign imagery from social media.

They also issued the below statement addressing the issue:

“We sincerely apologize for any offense our holiday campaign may have caused. Our plush bear bags should not have been featured with children in this campaign.”

In a more recent update, Balenciaga is now suing the producers of the campaign for $25 million.

The Kardashians star has a history and longstanding relationship with the brand.

She was recently named a brand ambassador and has sported Balenciaga apparel and accessories for many years. In fact, earlier this year, her ex-husband, Kanye West (legally known as Ye), also collaborated with the luxury fashion house for his Yeezy Gap line.

Kim Kardashian has collaborated with Balenciaga in the past and has a close relationship with the brand. The star regularly sports Balenciaga clothing and accessories and recently modeled for the brand’s show during a trip to Paris.

Kim remained silent on social media while the brand faced backlash for promoting the new campaign, in which fans came to her page asking her to speak up on the matter as a high-profile ambassador.

On Sunday, the star condemned Balenciaga’s latest campaign in a series of social media posts, stating that it left her feeling “disgusted and outraged.”

Below are images of her response on Twitter, where she notes that she “wanted an opportunity to speak to their team to understand for myself how this could have happened.” 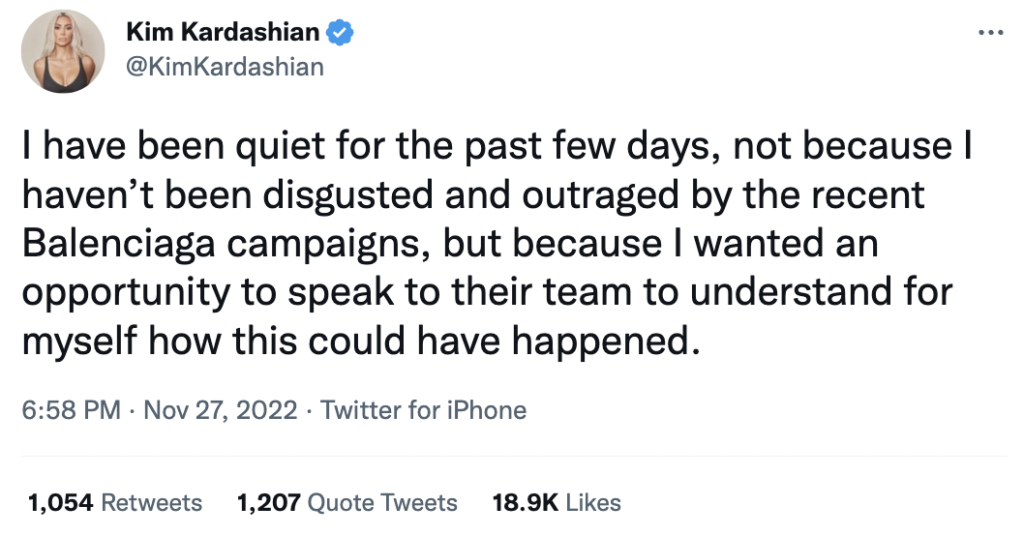 Only time will tell if the star will continue her relationship with the high-end luxury fashion house.

She made it clear that she will be “re-evaluating” her future with the brand in which her decision will be based on Balenciaga’s “willingness to accept accountability for something that should never have happened to begin with.”

She continued the conversation below stating this:

After publically stating the brand would be suing the producers of the campaign, Balenciaga took to their Instagram page on Monday to post the following statement: 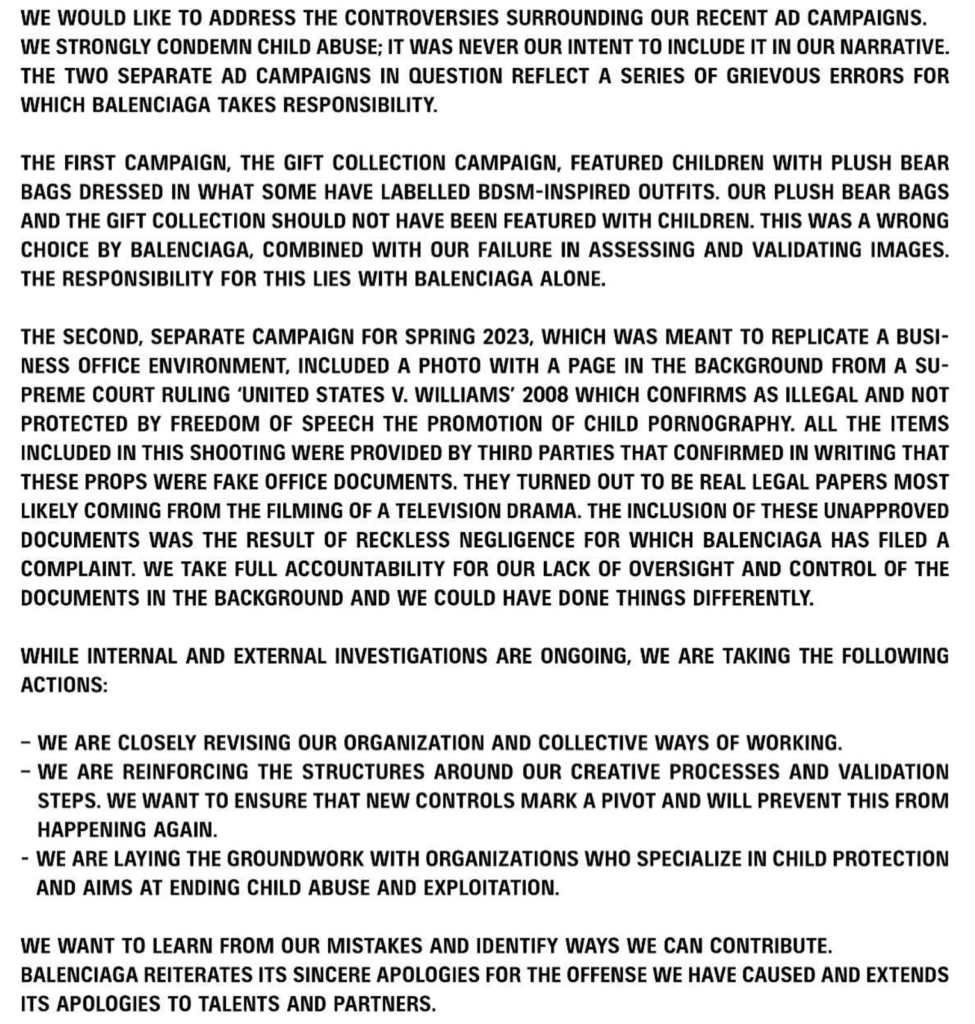