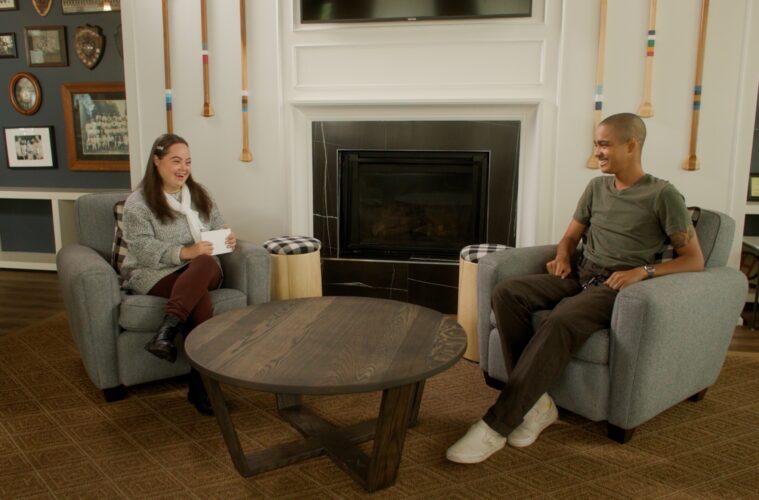 Maddie Tevlin Opens Up About “Who Do You Think I Am?”

“Who Do You Think I Am?” will be launching on CBC Gem on January 7 starring Madison (Maddie) Tevlin.

The show will consist of 10×10-minute episodes featuring Maddie Tevlin having enlightening, eye-opening and heartwarming one-on-one conversations with people who are often misperceived and misinterpreted. As someone with Down syndrome, Maddie Tevlin has spent her whole life being judged at first glance. But it has absolutely nothing to do with who she is.

In this digital series, she finds connections with other extraordinary individuals often misrepresented by their exterior, too. She has been passionate about following her dreams, sharing her passions with the world and shattering expectations from a very young age. Born and raised in Toronto, Tevlin has grown quite the social media presence since going viral after posting a cover of John Legend’s “All of Me” on YouTube a few years ago and through her advocacy work for the Down syndrome community.

Filmed earlier this year, season one will see Tevlin sit down with guests like Canadian singer, Tyler Shaw; Ann Pornel, co-host of The Great Canadian Baking Show; Sarah Nicole Landry of The Birds Papaya; and Juice Boxx (AKA Jo Primeau) from Canada’s Drag Race, to name a few.

Maddie Tevlin On “Who Do You Think I Am?”

What inspired the creation of “Who Do You Think I Am?”

I got inspired to act after I released my YouTube video and saw how people were so excited to see someone with Down syndrome on TV. My friend Sylvia came over and we were talking about being judged and I was really surprised that even though she doesn’t have Down syndrome that she felt judged a lot, too. Sylvia owns a production company and thought that might be a good idea for a show. She brought it to her business partner Jonathan Torrens (who I was in Mr. D with) and they loved it! We filmed a pilot in 2019 and then CBC Gem picked it up in 2020.

Why is it important to spotlight inclusivity and accepting differences?

People stare at people with Down syndrome and it’s always bugged me. There is so much more to us than we think. Everyone is so unique in their own way. I want people to see themselves on TV and know they can do anything, and I want people to know that dreams do come true.

During season one you had the opportunity to sit down and chat with many influential individuals. Was there a conversation or moment that stood out to you?

I LOVED talking to Tyler Shaw. He’s my musical crush, but I had no idea he experienced stereotypes because of his family background, and that he struggles with anxiety. He taught me a lot about how to manage tough situations and follow my dreams.

How has this experience helped you on your personal journey and how do you hope it will inspire others?

Throughout this experience, I felt like I really got to share with the people I talked to that there is so much more to me and to them, too. I think this show will inspire others to not judge someone based on how they look and just get to know them for who they really are. Even if you have something different from others, that doesn’t mean you don’t have dreams and goals that you want to accomplish. Today is a great day to show the world who we really are.

What would you say to directors and producers to encourage them to diversify representation when casting for films and series?

I would say that we are all real people and just because we have disabilities, it does not mean that we don’t deserve to be represented.
Published by HOLR Magazine