As high fashion is continuously evolving, things seem to have taken a more feminine angle in both colour and design.

The past decade has been an exciting time for menswear, as designers begin to diversify the male runway by showcasing pieces like skirts and dresses down the catwalk.

Though Charles Frederick Worth built the pillars for modern menswear fashion in the 19th century, things have changed significantly since. A wide variety of styles are accepted today that would been critiqued in the past. Makeup, man buns, and heeled boots are just some examples that have been seen in street style looks and runway collectively.

A handful of designers paved the way for more feminine fashion, pushing boundaries of defining “a manlier look”, shying away from suits, dress shoes, and clean pressed shirts. Some of these designers’ brands are the likes of Alexander McQueen, Gucci, and YSL. With Alexander fresh to the scene, his “1996  ready – to – wear collection” used mesh tanks as opposed to the regular fabrics he typically uses to dress his models. To add, he made sure to accessorize with necklaces and  nose rings. This could be considered the start of “modern masculinity”. what soon followed suit took the runway by a storm. This spark started a trend that would see men in more fitted apparel. 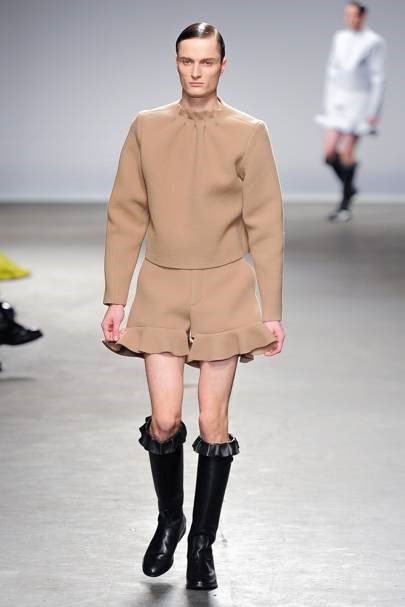 In recent years we see that it has taken a huge leap from just mesh tank tops to now tights and dresses. J.W Anderson is a perfect example of this. Anderson is commonly known to blur and push the boundaries of menswear. In the 2013 autumn/winter show, men walked down the catwalk wearing skirts paired with long sleeve tops, and frills to top off the outfit. Knee high boots, bustiers, and tops that highlighted their torso are just some of the things that this collection emphasized. Anderson is just one of many designers that are pushing for this new and captivating look. Not only is it just up to designers that set the standards of “masculinity”, in the past 30 years we have seen the rise of glam rock and how that affects what people will perceive on looking “manly”. 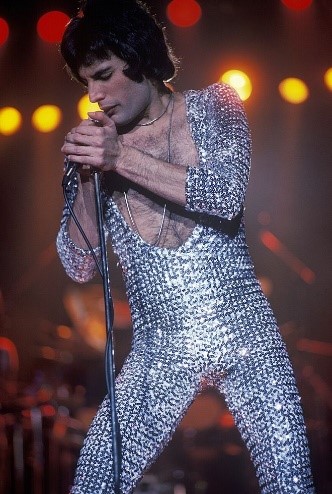 Along with the designers that tried to push a more glam style to the generic “man” look, celebrities also joined that trend with people such as David Bowie and Freddie Mercury – shown in the above image of Freddie in concert, wearing a deep V-neck, fitted jumper. Fashioned with silver sequences, it closely resembles the more feminine angle that the runway showcased in prior years. This wave of glam rock did affect our modern society, though it tended to stay within the realm of eastern countries; as they are more expressive in their approach to streetwear. Makeup,  leather skirts, and knee-high boots can be seen all around in the likes of Japan and Korea. 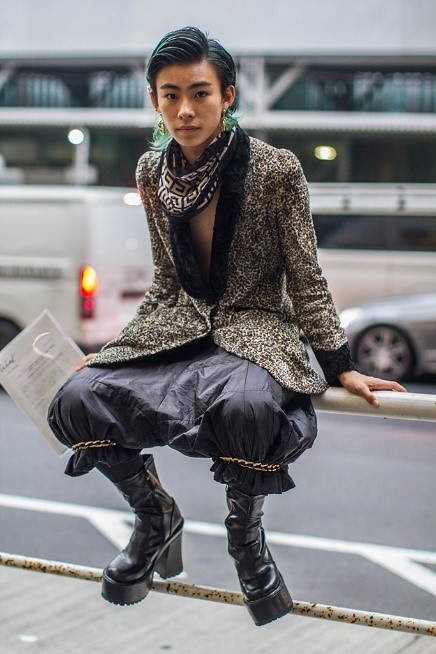 The territories that show this most prominently are Korea and Japan. Streetwear in both these countries has demonstrated an extensive variety of fashion trends. Crazy hair, minimal, anime-influenced fits are just an example. As their fashion sense evolves, we can see that a more feminine way of dressing has come to fruition. 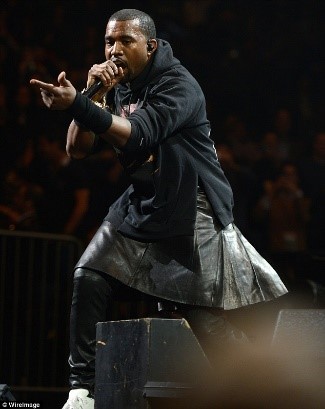 We think the direction is huge for breaking down gender binaries. It is a breath of fresh air to see a culture shift from stereotypic tropes to ultimate self-expression.

For the latest on fashion and culture, make sure to follow us @HOLRMagazine.