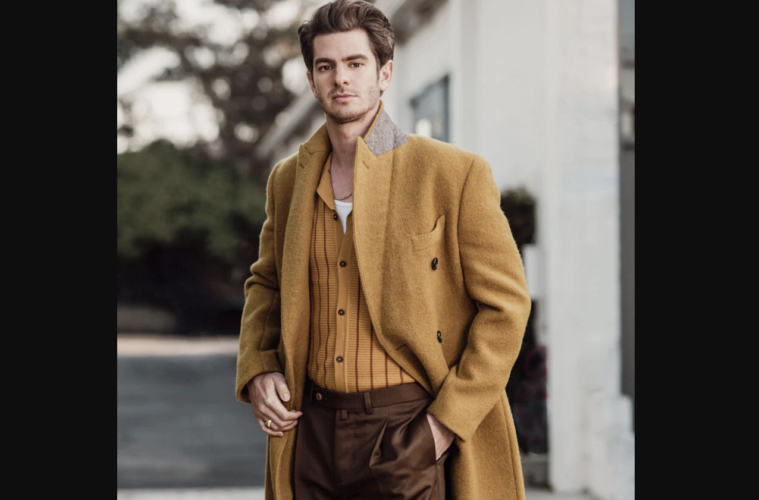 Andrew Garfield took over as Spider Man from Tobey Maguire. And he looked impeccable in the skin-tight red and blue spidey-suit. Unsurprisingly, he looks just as good, if not better, in regular clothing.

Garfield grabbed the role of Spiderman from Maguire in 2012 with both hands, and it stuck to viewers immediately, just like his webs do. He stood aside Emma Stone who played Gwen Stacy, and the two became everyone’s fan-favourite. How do we know Garfield looked good in the Spiderman suit when his face was fully covered? Well, sometimes the mask was ripped off. There are also mask-less pictures of him on the internet.

The star’s good looks stand out even more when he dresses as himself. He usually decides to opt for a casual-look. Unless of course he has to attend an event where you have to glam up a little more. Point is, he dresses for the occasion. 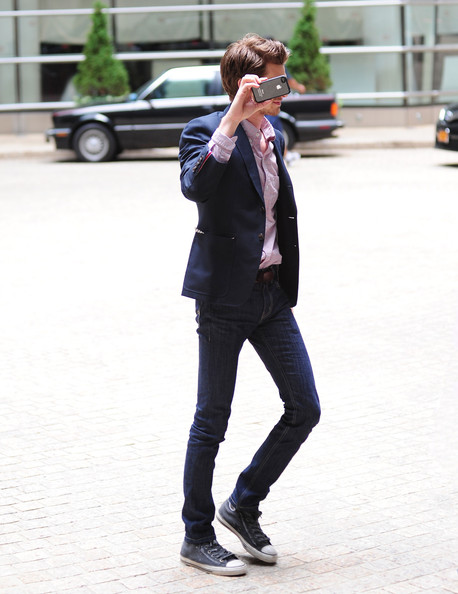 Garfield is unfortunately hiding his face with his iPhone. His good-looks would’ve enhanced this semi-casual look as he strolls down the street. The actor’s blue skinny jeans from Levis amplify his lanky legs. He clearly isn’t scared to flex them, and why should he be? To go with the skinny jeans, he decided to go for a tea pink collared shirt with the top two buttons undone. His shoes are what give the look a more casual definition. The actor with the British accent is wearing a pair of all star Converse. Did he wear them because they’re more comfortable than leather shoes? who knows. All we know is that he can pull this look off.

Garfield in the tube Now then, what do we have here? a celebrity as big as Andrew Garfield is taking the tube. Do you know anyone that looks even half as good while commuting? because I don’t. Garfield’s love for casual-wear continues as he rocks a classic plaid shirt with different shades of blue. He has gone for a similar shade of skinny jeans as he brings back the lanky legs. It almost seems as if the jeans and the plaid shirt are made from the same cloth. Spiderman has gone for nike runners on his feet, which are ultra casual. The Beats By Dre wrapped around his neck add some unintentional accessory. His mop of thick brown hair doesn’t do him any harm either. By the way, how about that one strand of hair dangling down… We can barely see the fit of Garfield’s jeans here, but at least we can see the colour. If he got rid of the scruffy beard, the man who played Toby Maguire would be mistaken for a high school student. But, he is anything but. It looks as if Garfield really loves plaid, as he is back in it again. However, he has done something rather interesting. Spiderman is wearing a cardigan with navy blue stripes under the shirt. And under that, he decides to go for a yellow graphic t-shirt. Very interesting indeed. Oh and that hair again… it looks rather shiny here. I wonder what he’s carrying in that bag… We finally get to see Garfield in something other than plaid and a pair of jeans. This time, he is wearing something rather unique. A scruffy dress sense that was relevant only in the 1990s. However, Spiderman looks perfect in it. The first layer on his torso is a chocolate hued-leather bomber jacket. The second layer is a chunky textured knit, and underneath that is a checked shirt. To top it all off, you can see the wraparound scarf, which is really hard to miss. The jeans are back, but they’re not skinny or blue. In fact, they are a pair of straight charcoal jeans with the bottom hems rolled up. The look would be incomplete if the Converse kicks weren’t worn out.

Which look did you dig the most?