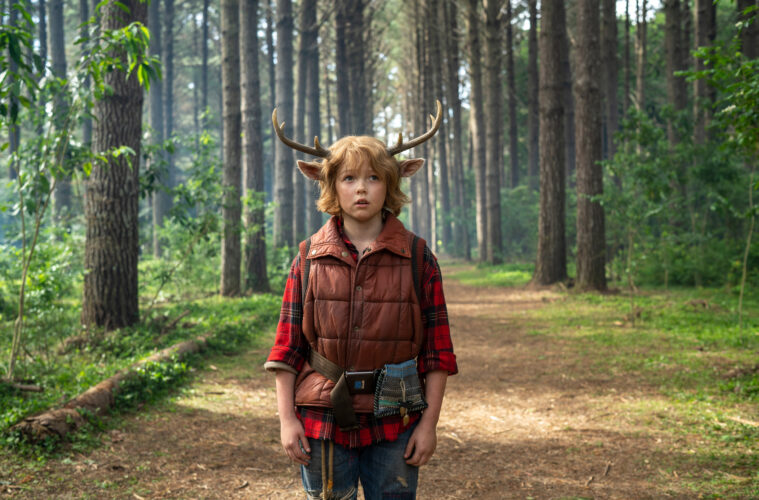 “Sweet Tooth” is an American fantasy drama series developed by Jim Mickle, and is based on the comic book of the same name by Jeff Lemire. The series follows the events of a post-apocalyptic world where mystery looms large.

This Netflix creation examines a world a decade after a society-restructuring pandemic. The change was a mutation that coincided with a change in the species. All new born babies since the “Great Crumble” are hybridized with animals. This presents babies with animal features that society is not prepared to deal with. Just like babies in real life, their cuteness can get overlooked.

Gus (Christian Convery) is a young boy with elements of a deer. He’s got the big antlers, the ears, and the strong sense of smell. The crossbreed child was suddenly left on his own after hiding in the woods with his father. He has no real sense of the outside world, thanks to the isolation of his upbringing. The isolation is not his fault as his father tries anything and everything to protect his son.

However, he is exposed to the outside world when a football star turned saunter vigilante – Tommy Jepperd, (Nonso Anozie) makes an appearance and they both run into each other. Gus begins a quest to find his unknown mother, accompanied by Jeppered. From the outskirts of civilization, to the post-apocalyptic wasteland, both characters make their way through America as they face trials and tribulations. Jeppered claims to hate kids, but will have a change of heart as the story goes on. Though these two characters is what the show is based around, there are several other figures that are involved. We get introduced to Adi Singh (Adeel Akhtar), a doctor determined to help his ill sister (Aliza Vellani) no matter what. Another character to keep an eye out for is former therapist Aimee (Dania Ramirez).

However, luckily for the viewers, there are other adorable little ‘humanimals’ running around that are shown later on in the season.

There is also a young woman known as ‘Bear,’ who is the leader of a cadre of orphaned teens with mysterious objectives.

The pilot sets the tone perfectly, with a beautiful landscape that captivates you instantly. The vibe of the show instantly triggers your curiosity forcing you to continue watching. You witness the relationship between Gus and Jeppered as they walk you through their shenanigans.

Even so, every show has its pros and cons. Sometimes, Gus’ journey can seem a little predictable in some moments of the story. Because the plot is such, and the story is based around a child, this can be an automatic given.

By the end of the pilot, you’ll know whether is journey is worth your while. The plot can be dragged out, but most shows with detailed writing usually end up well. Take “Breaking Bad’ for example. The show is a slow build-up that has the occasional speed up, involving drama and action.

If you decide to keep going with the adventure, you will be able to enjoy the series in a calm and settling demeanour. However, if you don’t, there is not something too drastic you’ll be missing out on. Although, I would watch the series to discover the different kinds of hybridized creatures, and how they can come together to take over the world that is terrified of them.

You can watch the series here.