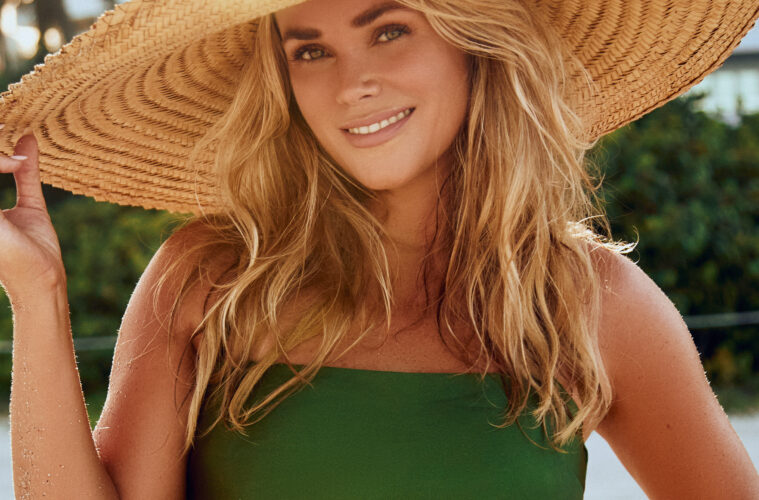 Kelly Hughes is breaking barriers in the modeling industry!

Model Kelly Hughes recently broke barriers in this year’s Sports Illustrated Swimsuit issue as the first model to highlight her cesarean section scar.
This year’s most talked about model really can do it all! During today’s conversation, Kelly dishes on her incredible Sports Illustrated moment, career to date, family life, and how she’s the founder and designer of jewelry brand, HÜES!
Keep reading to learn all about Kelly and her inspiring journey. 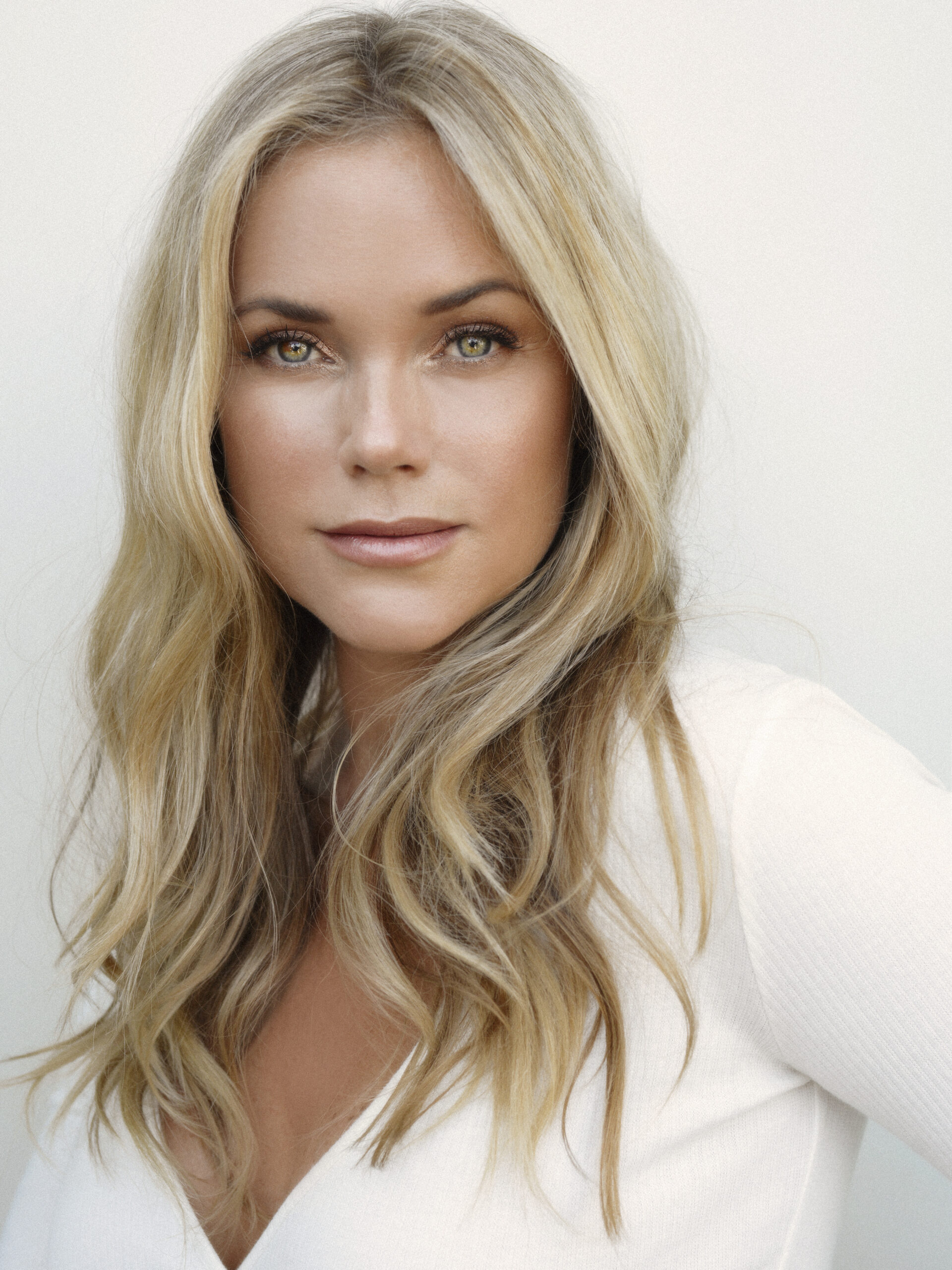 Talk to us about your journey as a model and how your career began.

It was really exciting actually because I didn’t know anything about the modeling industry or anything about fashion. I was working at a salon when I was 17 and a guy that did makeup there was like, “Why don’t we do some pictures?” I said sure and wanted to try it out. I ended up submitting them to some local agencies and one of them picked me up so that was really exciting. 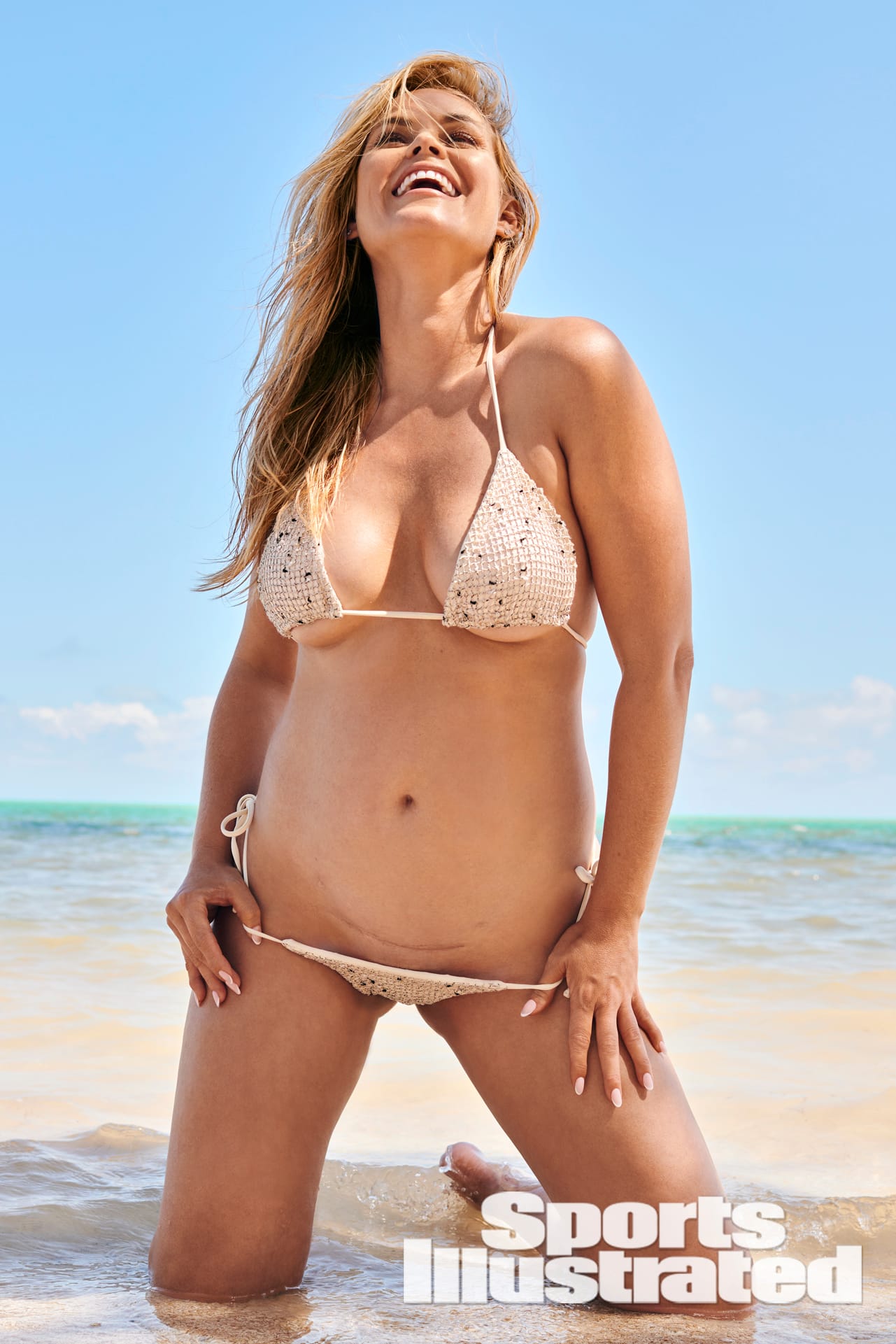 You broke barriers in this year’s Sports Illustrated Swimsuit issue, being the first model to highlight your cesarean section scar- tell us about this experience and what it meant to you.

Thanks! It was really incredible because I was very open about the fact that I was very insecure about my scar. Becoming a mother brought on so many changes, with just my sizing in general. I was bigger than I was used to being and I also had this scar. I had to figure out how this would work in the fashion industry. Unfortunately, the industry is so critical -I’ve been a model for 22 years and I’ve been exposed to a lot of criticism. Even when you’re successful at what you’re doing you can run into difficulties in this industry. I was thinking, “Where do I fit in at this point?” That was a little bit scary.

When this opportunity came around that Sports Illustrated was looking for a model with a C-section scar, I was really up for the challenge and excited about it. I thought it was so cool that they wanted to showcase this. However, I didn’t know how I would feel about showing my scar since I hadn’t before. It brought on a lot of concern but I was also excited- it was a bunch of emotions running through my mind!

I also thought that if it could help someone, I was really up for that. I want to share my story and everything I’ve been through to encourage others. 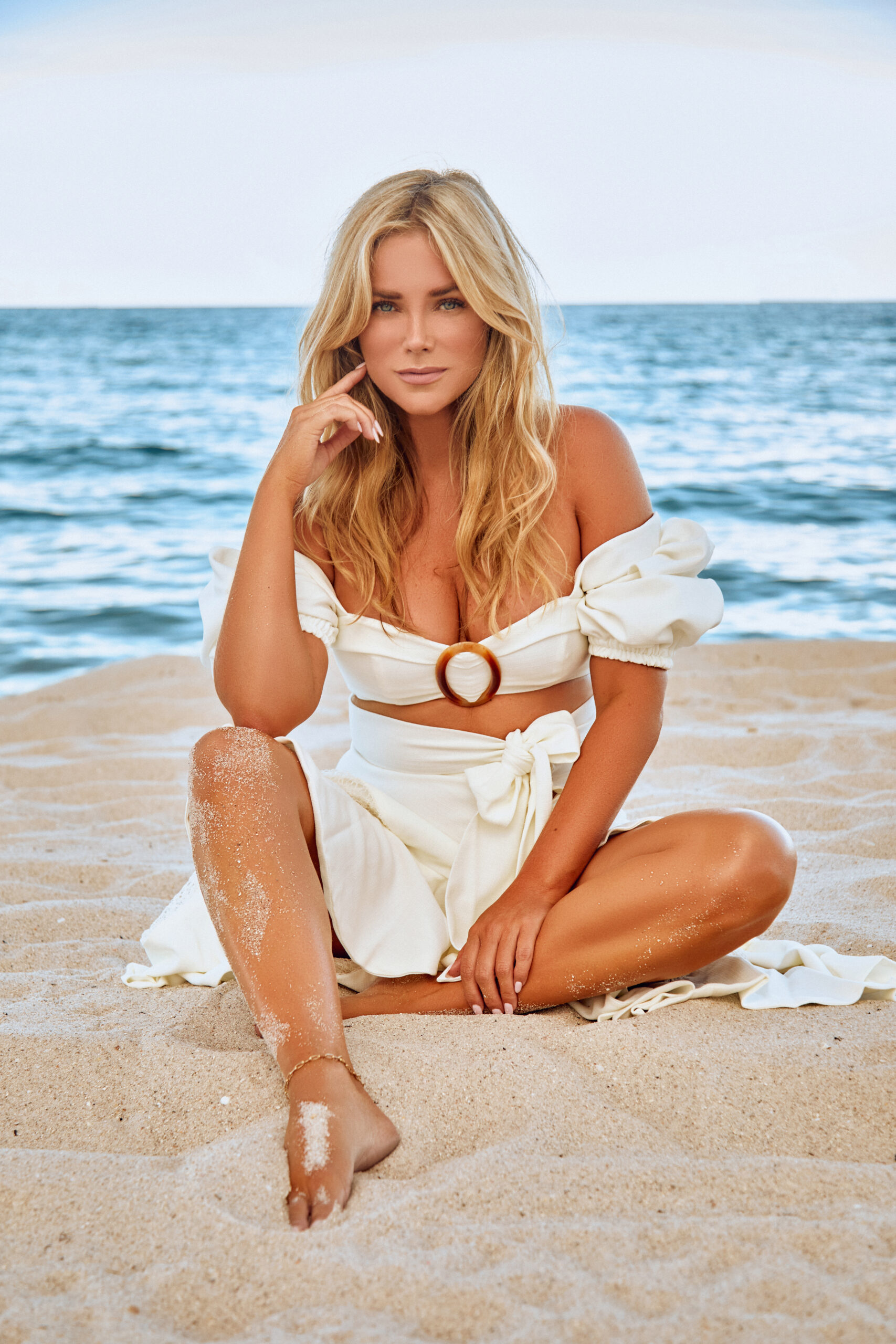 Tell our audience more about your partnership with ESTAS Beauty in starting the #ScarLoveChallenge.

ESTAS Beauty reached out to me via DM and said that they have a scar kit that they would love to send to me. I agreed and when they sent it to me and I saw their branding and how much they were into embracing scars and taking care of them, I realized that I had to do something with them.

After all of the responses I got and how empowered people felt from seeing my photos in Sports Illustrated, I thought how much more empowered could they feel seeing hundreds of thousands of photos from everyone with all different scars? This is because people reached out to me about all different kinds of scars and stories- people also reached out to me that were just mothers that resonated with another aspect of my story- so I thought that this really empowered people from all walks of life with different journeys. We realized we should represent everyone.

With that, if you #ScarLoveChallenge we would send out 3 ESTAS Beauty kits- like the one they sent me- because it’s so good to nurture and love on your scars. Then you start to love them and embrace them, which is part of the healing process.

Essentially, we’re giving away 3 scar kits and we’re also giving away $1 to World of Children for every post that hashtags #ScarLoveChallenge up to $1000.00. All you have to do is take a picture of your scar and share it with us so we can build a community. This community will help people that aren’t ready to show their scars feel encouraged and see other people loving on their scars.

It’s really empowering seeing others that have overcome difficulties because you feel more empowered that you can too. 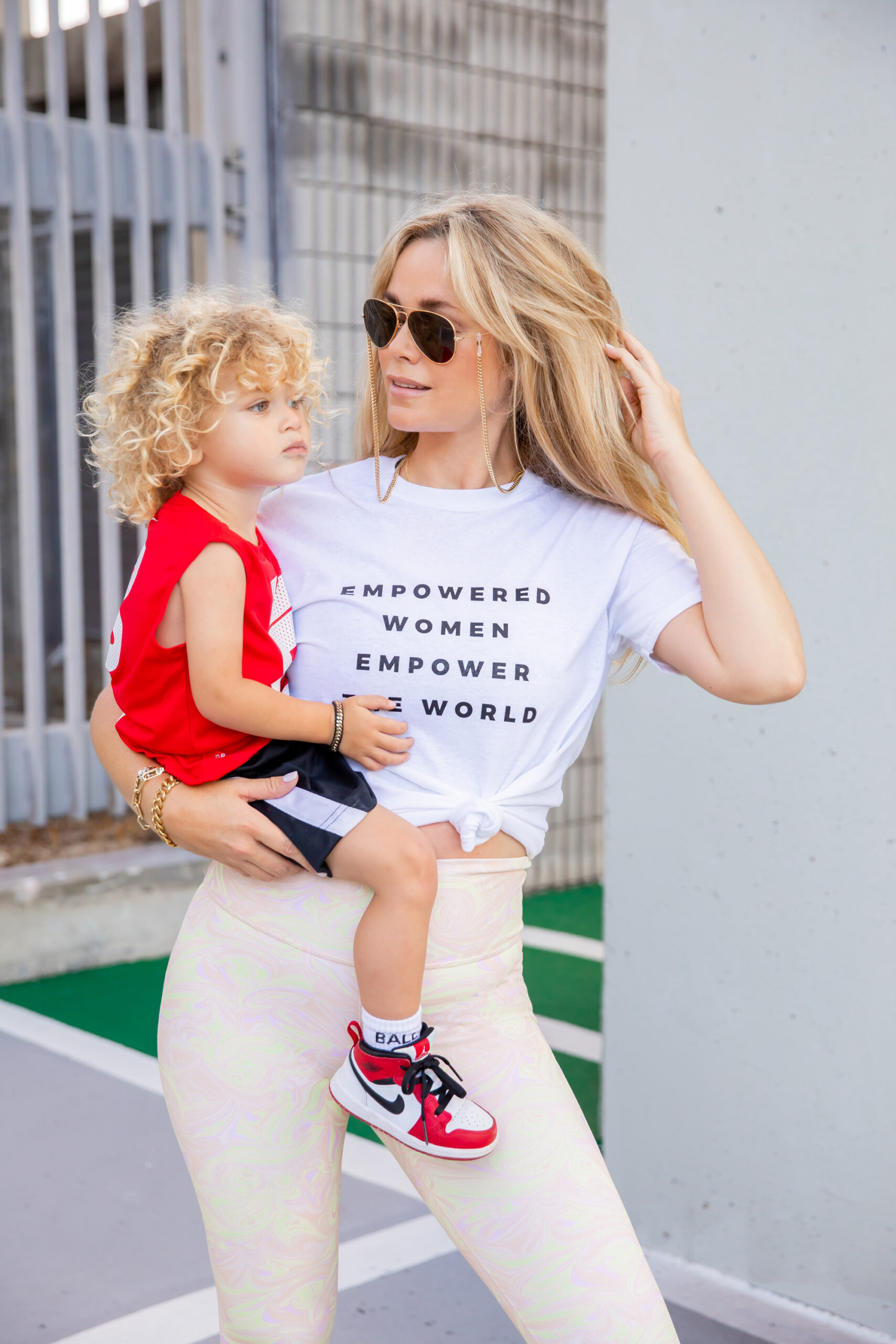 You can do it all! In addition to being a model, you’re also a mom and an entrepreneur. Talk to us about how you became the founder and designer of the jewelry brand, HÜES.

It was crazy because sometimes you have these hidden talents you never know you have! It started in 2009, and the economy was a little bit strange- we weren’t sure what was going to happen with the mortgage crisis, and work was slowing down for me for modeling. As a result, I picked up a job one day a week at a restaurant. The manager was from Greece and he had these incredible bracelets on so I suggested that I make him a bracelet for fun. I was really inspired by what he was wearing.

Fortunately, so many people liked it that over 200 people bought bracelets from me from word of mouth by him wearing it- the word was spreading.

From there, I picked up my own first store where I was selling HÜES, and it continued from there. It was exciting because the economy got better from there and I was modeling, had my jewelry brand, and I’ve been able to meet so many people along the way. I really feel it’s a two-fold story- sometimes you can take a step back but then you take a step forward. You can’t be afraid to try new things.

Working at the restaurant- although unrelated to the jewelry business- made me realize that once I discovered this interest, passion, and talent for making jewelry- plus, people loved it! As a result, I continued it and made it into a business. 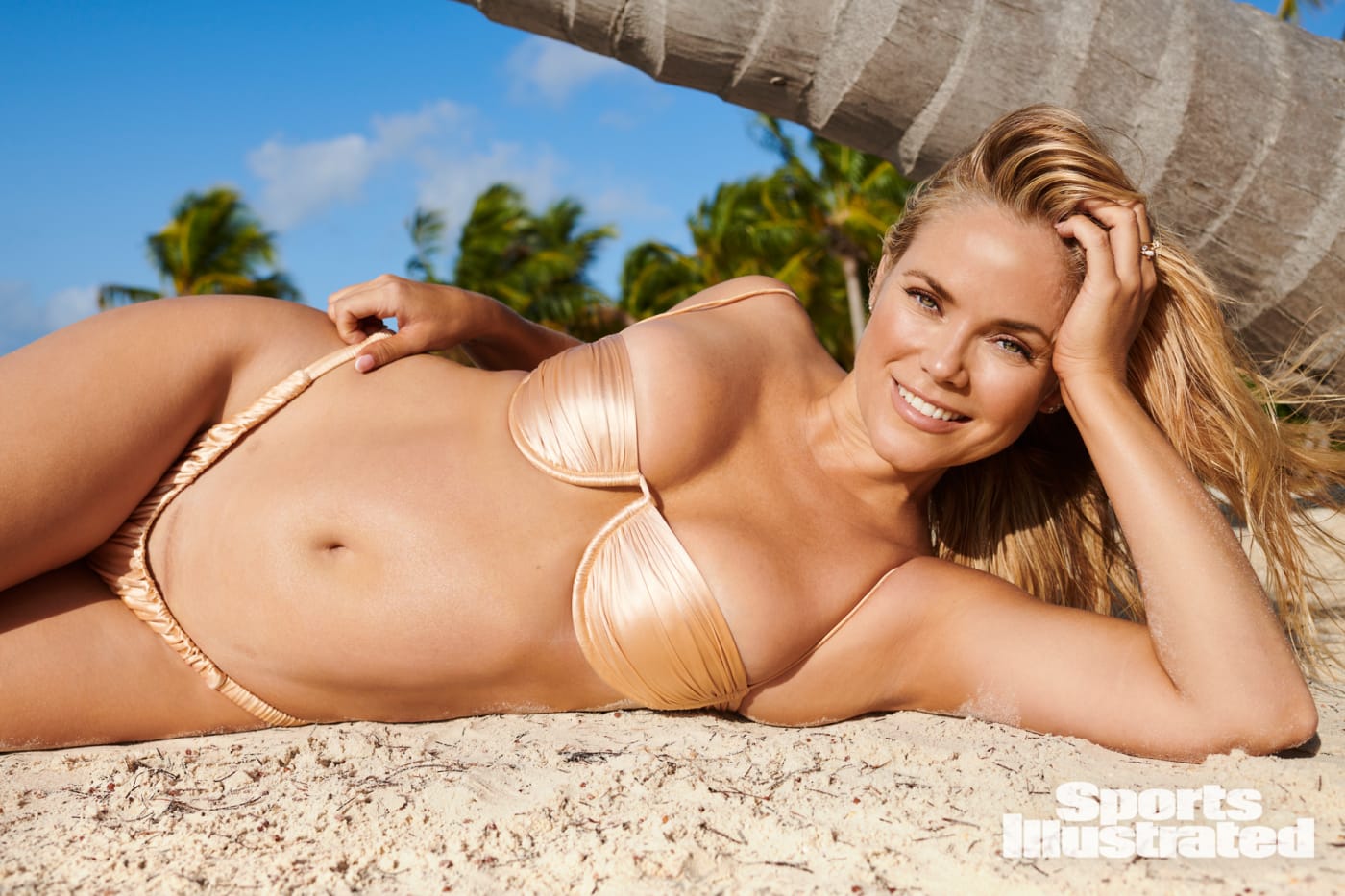 I’m really excited about Fashion Week! In my heart and my core, I love fashion. It’s exciting that fashion is really evolving with the inclusivity of sizing. I’m excited that I’ll be in New York for Fashion Week this September.

I’m also working on my jewelry brand and one of my pieces of jewelry. I’m setting up a charity and figuring out how to put it all together. I also have a few other things up my sleeve that are coming up in the motherhood realm and things that will help give back to people in this conversation.