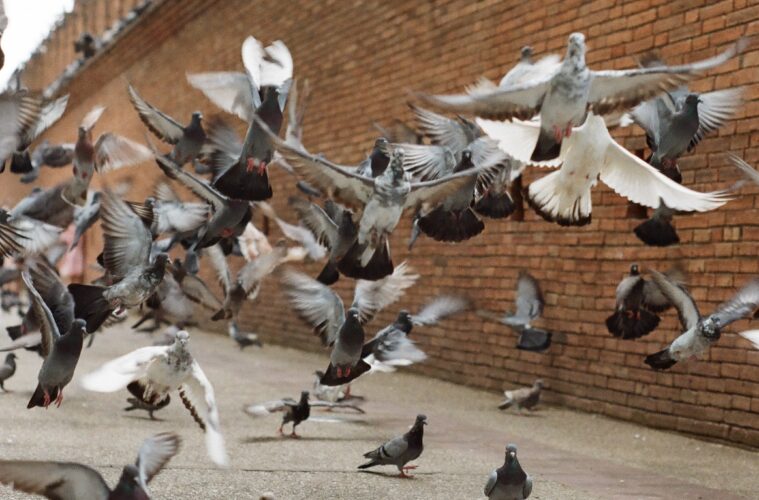 How to Keep Pigeons Away in Industrial Areas

Industrial sites, structures and areas often have many places where pigeons can roost or nest. Once they are in occupation, they will stay there and it’s difficult to remove them because they do not migrate and will stay near their birth home.

The problems pigeons cause

Pigeon droppings not only make a mess but contain a corrosive acidic element that can etch through concrete or steel. The accumulation of droppings can create slip and fall hazards. Over time their nests and droppings can cause damage to structures, building materials and equipment. Pigeons can also be a potential health hazard because they can carry a number of diseases.

When their numbers increase, which can happen very quickly, they can impede operations, damage property and become a health and safety threat. Action has to be taken to rectify a problem before it escalates and gets out of control. There are ways to deal with them and knowing how to keep pigeons away involves using measures like physical deterrents and reducing reproduction.

Setting up physical deterrents can work well but only on small industrial sites or for small areas of large sites.

Spike strips: On small industrial sites, it can be effective to use spike strips that are not that expensive or difficult to set up. The spikes make it difficult for pigeons to find a spot to land and they will fly off to find a more suitable location. The tips of pigeon spikes aren’t sharp so they won’t injure the pigeons.

Bird netting: Using bird netting will prevent pigeons from nesting inside or under building structures. It is usually virtually invisible and durable.

A bird slope: This prevents pigeons from landing or nesting in 90-degree areas, like ledges or eaves.

Exclude pigeons from industrial buildings: Pigeons must be prevented from gaining access to industrial facilities, especially ones associated with processing, manufacturing or storing human food. Large open doorways can be sealed with bird netting or other types of physical barriers. If this isn’t possible, physical deterrents must be used to prevent pigeons from roosting on rafters and other overhead areas.

Remove their food and water sources

Pigeons are always looking for easily accessible food and water. They will keep coming back to certain areas if they find readily available sources of food. Garbage in industrial areas will attract them so it is important to keep garbage areas scrupulously clean and make sure bins are tightly sealed. Ensure that there are no dripping taps or pools of stagnant water in the area.

Removal of food and water sources can have a positive effect but it is difficult to keep removing them on a large industrial site and combining this with other measures is necessary.

Trap and release them

One of the reasons getting rid of pigeons when they’ve settled in isn’t easy is because they have a homing instinct that will bring them back to the same spot to breed. This is why it is not really effective to trap them and take them away, as they will easily find their way back again. Trapping will also only work on a small industrial site where not too many traps are required and it takes time and energy, requiring visits to each trap every day for however many days traps are in use.

Trap and poison them

Decision-makers may choose to trap and poison pigeons. Apart from the fact that many people regard poisoning them as inhumane, pigeons breed so rapidly that trapping and poisoning them won’t permanently deal with the problem. The pigeons that are left behind will often breed more prolifically to fill the void. Mating pigeons can hatch as many as four broods a year.

The best way to deal with pigeons in large industrial areas is to use pigeon contraceptive bait. It can work well in areas where there are large buildings like warehouses and factories. It works by disrupting the reproductive cycle of the female pigeons. Mixing it into food and distributing it daily means that females who consume it will still mate but they lay eggs that do not hatch.

Limiting reproduction is the only way to gain long-term control over a pigeon problem on a large industrial site. It is a humane solution that can prevent all kinds of problems, such as sanitation issues or public relations issues that can arise from trapping and killing live pigeons.