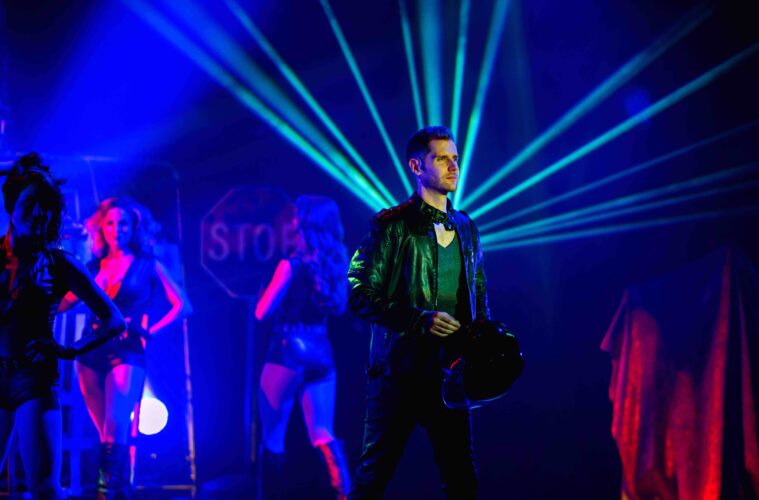 If you’re fond of magic and illusion shows, then you’ve probably heard of the widely-known illusionist Rob Lake. Back in 2018, Rob became a finalist on America’s Got Talent’s season 13. We recently sat down with Lake to chat about his career as an illusionist and his current online show with Armed Forces Entertainment.

Since his audition on America’s Got Talent, he left both the judges and the audiences amazed and perplexed, for they had no idea how he could perform such acts without having actual magic on his side. Besides participating in the show and performing shows since he was a child, each time larger and more ambitious, Lake has worked as a consultant for Broadway and media productions that seek advice on illusions and magic shows. 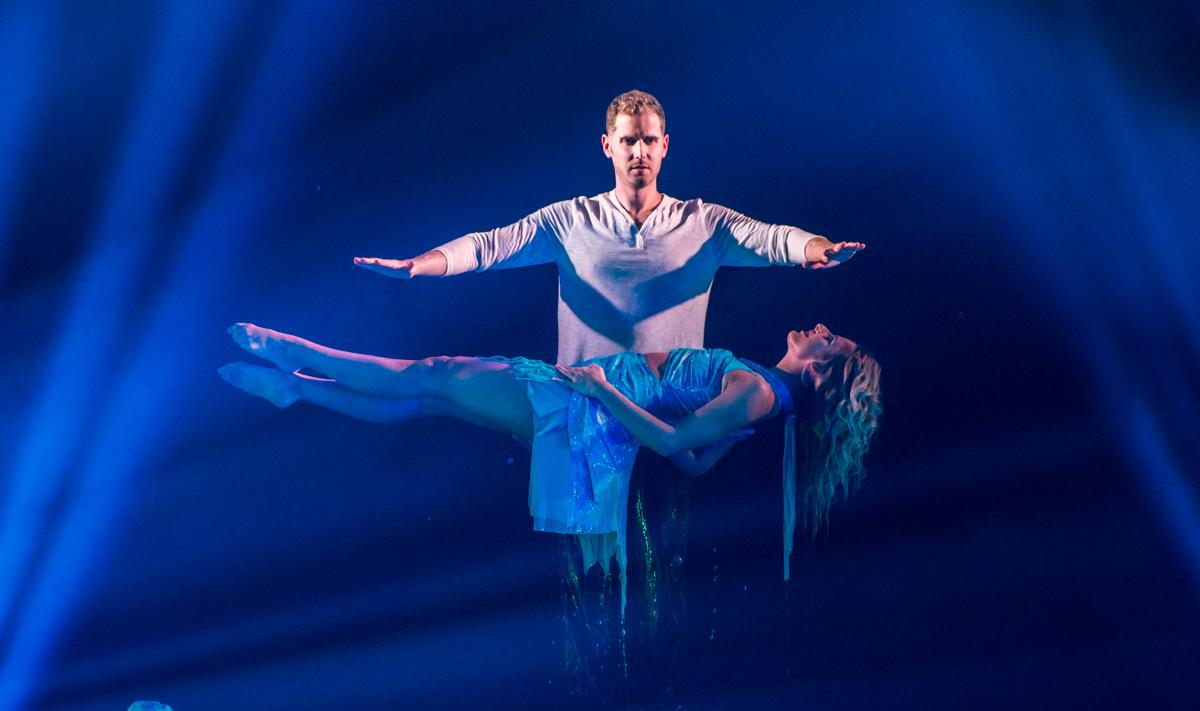 For over a dozen years now, Lake has performed a yearly show with Armed Forces Entertainment as his way of thanking and bringing hope to the U.S. Military troops and their families, even when stationed overseas.

In this year’s AFE special, he will be debuting three illusions that have never been seen before, including one that he has planned for decades even, but only now will be showing to the world. With this show and with every other since last year, Lake aspires to uplift large audiences, more so in these trying times. You can access the show now here on AFE’s YouTube until May 14th.

Watch our interview here, or read the full transcript below.

How did your interest in illusions begin?

When I was 10 years old my parents took me to see a magic show. And I just knew that is what I will do my entire life.

And how did you begin your career?

I started as a kid, I went to the library and I get every book I could find on magic, and then I would start to do shows for birthday parties or for church groups or for civic groups. And I would just keep saving my money that I would make those shows to buy bigger equipment and bigger illusions and so incrementally over many decades I’ve got my show up.

Where was your first show?

My first shows were in my backyard, on my porch. I would invite the neighbors over to watch me do magic in the backyard.

What is your favorite thing about what you do?

I love that I get to take the audience on a journey into worlds of magic and mystery and create wonder, enchantment, and the feeling that I create of anything being possible.

Can you tell us about your current show with the Armed Forces Entertainment?

So for the last 15 years, I’ve done a tour where every year for about one month, we will take my entire show to military bases all over the world to entertain the US troops and their families that are stationed overseas. And because of the COVID pandemic, we were not able to go this year, So instead, we created a TV program for the Armed Forces Network and for Armed Forces Entertainment, so that all the troops around the world, their families can see our show in a special and unique way, even though we couldn’t be there in person.

Would you say your participation in America’s Got Talent, Back in 2018, changed your life?

I’ve been very lucky my whole life. I’ve been able to follow my dream and work pretty regularly. So we’ve been just as busy before America’s Got Talent, as well as we have afterward but I know a lot more people have seen me and see my illusions. So going on the show was very special for me because I was able to let so many millions of people around the world see my magic and my creations.

How did you manage your profession last year during the hardest months of the pandemic, when you couldn’t have any live shows with an audience?

So of course, the pandemic, all my live shows canceled and hopefully, they’ll start to reschedule soon. So we spent a lot of time working on things that I hadn’t been able to do when I was traveling we recreated some illusions and finish some things I’ve been working on so the creative time was spent in my warehouse developing things, things that we were not able to do when we lived on the road and traveling and touring all the time, but luckily several of my private and corporate events, transformed from live events to online events. So we transformed my warehouse into a virtual studio, so I did not want to do card tricks in my living room at home or small magic. So we were doing large-scale productions like TV broadcast quality productions from the studio we created inside of my warehouse.

You’ve traveled around the world for shows, what have been your favorite experiences when touring?

So I love to travel, I think I’ve been to about 40 countries. And for me, when I do the show we bring so much of the equipment, we read the same lines, the same scenery, the theatrical world for me is almost the same no matter where I am, and the experience that people have, even if there’s a language barrier if they’re in Japan or Germany where there’s a language barrier, even with a translator, it doesn’t matter because, in all cultures and languages, magic’s the same. Gravity applies anywhere, so if I fly if I make somebody levitate. People know that’s magic because we all understand gravity, no matter what language you speak. So for me, I get to bring my illusions all around the world, but then after the show or the days off or the time before I come home, I love to travel and explore so I love to sightsee in travel. I always try to add on vacations and trips so that I can explore the world and learn more and grow and learn about different cultures and histories.

Out of all the drinks and illusions you’ve performed in your life, which would be your favorite, and why?

Asking a favorite trick is very difficult because some of these things have taken me years to create. So I guess it would be like asking a parent, which one is their favorite child, they probably have one but I don’t think they would ever say so. For me, some of my illusions have taken years, like there’s one that I’ve just debuted on this military special that took me over 25 years to create. I had the idea when I was 12 years old, and I’ve been working on it for over 25 years and finally, during this pandemic, we were able to finish it, and produce it, and put it in the show and we’re able to put it on this special we made for the armed forces. That one took a lot of blood, sweat and tears, and many years. So it’s really hard for me to pick a favorite illusion but I enjoy performing them all so much because, after all these years of work, I finally get to see how the audience reacts and see that it inspires them and wows them, and moves them and for me, that’s the magic part. So if I had to pick favorites, usually the ones that are interactive, because it’s different every night, it’s more fun and I never know what the audience will say or do.

How do you measure your success? What do you have to reach in order to think that to yourself that you’ve made it?

So I’m very, very difficult and hard on myself. I am my own worst critic, and I always see room for improvement after every show. I’m always watching the show videos and taking notes and saying how can this be better, how can we make this a better experience. I’m a perfectionist so I have to remind myself to step back and appreciate what I’ve accomplished and what I’ve done quite often because I’m really, really critical. And I strive for perfection and I always wanted to be the best product possible so I frequently have to remind myself or let my friends help remind me that, you know, I’ve actually done quite a bit in my life and I should be proud of it.

What do you think sets you apart from other illusionists and artists?

So when I was growing up, there was a lot of magic on TV, a lot of magicians who perform big stage shows. Now, very few magicians are performing big illusions shows like I do, and what sets me apart is I have one of the largest, if not the largest touring magic show in the world. It takes five semi-trucks to take my tour around and everything I do is very theatrical, meaning there’s a lot of scenery, there’s a lot of production, there’s a lot of storytelling, there’s a lot that goes into it besides just the trick. So I think that’s what sets me apart is I try to take the audience on a journey with me to these magical realms. And I do that through the theatrical storytelling.

What would you want to achieve in the world, as a performer?

I hope I keep making people happy and inspiring people and keep being able to do what I love.