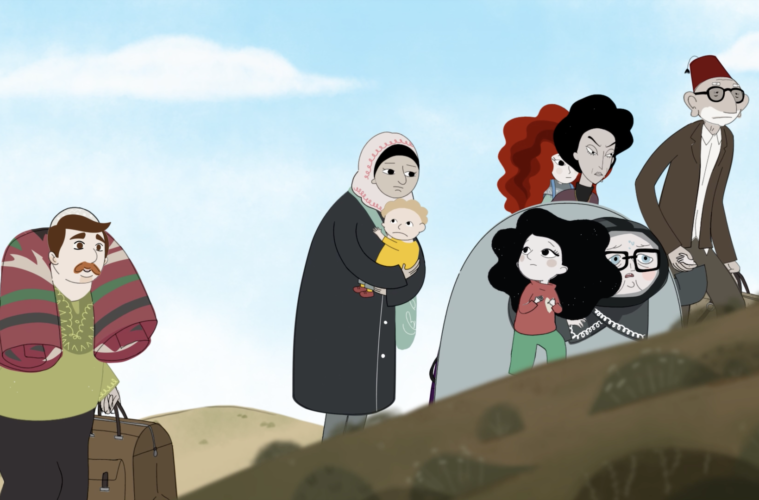 Marya Zarif is a Syrian born artist who now resides in Montreal, Canada, and has now since been using her passion and skills as an artist to connect people with understanding the stories of refugees from around the world, the challenges they face and of course to bring light to the help they need in order to succeed in coming to countries like Canada.

Giving a voice to children and families is crucial to helping them in their situations, how do you hope your animated series Dounia can show Canadian what is happening and how they can help?

As a wise man once said, “The tragedy of the poor is that no one needs their friendship.” In a world divided between prosperous regions and countries in distress, the same goes for the exiled, migrants and so-called “foreigners“ in general. Out of respect for the peoples’ stories, it was important for me to tell a story that connected deeply with the Syrian culture. Details of daily life, traditions around cooking, music, myth, legend and most importantly, the language itself and it’s mosaic of images and historical references, were all celebrated. The magic of the baraké seeds represents the roots of Dounia. Like the seeds, this magic finds its place in the smallest things, which remain no less ever so rich and marvellous. Ultimately this is what will allow her to overcome life’s obstacles and move forward.

Paradoxically, the cultural specificity and the authenticity of Dounia’s universe are also a way to reach closer to the hearts of viewers from all cultures alike. Dounia and her characters are meant to appear to young audiences as new members of the family or friends they would like to have. With Dounia, I wrote a long love story for my country and for my people, with the secret desire to include the audience in the family — therefore, raise awareness by creating emotional bonds between Dounia, the young viewers and their families.

In the end if, after watching the series, children feel a desire to meet and befriend Dounia, I think we would have achieved something.

Especially with everything happening in Afghanistan right now, what does it mean to you that you are able to tell these stories that need to be heard by other counties including Canada?

Since 2011 when the events in Syria started to take place, I have observed how the subject of Syria was both over-publicized and very poorly understood. All of a sudden, the country of my childhood was nothing more than a name for desolation and destruction. And while the themes of war and migration have arguably become oversaturated in the media, most of the coverage of these problems has tended to exclude the voices of the actual people involved. With that in mind, it became necessary for me to reach out and open a window to these voices. I sought to make this series a way to show respect for children’s rights to their stories.

Being an artist, what inspires you to create especially a series like Dounia, with such heartbreak and emotion?
Since the start of the long war in Syria — with all the destruction, displacements, human loss and tragedy — I have also observed, and with quite an admiration, the resilience of my people. The vast majority of Syrians stood their ground and were able to create life (migrating, changing countries and/or staying on the ground and continuing to live, love, give birth and raise children) despite and against the odds. Children of Syria, the “lost generation“ as called by the UN, were especially resilient. They smile and search for laughter and joy amongst the chaos.
So, I created Dounia: the 6-year-old little girl with dreamy Middle Eastern eyes, who always has a big smile. She’s full of joy and hope. She carries the weight of her heritage as she is swept across the world as the uprooted child that she is — but far from being a victim. I created her as I see all children, especially those who go through such difficult journeys, as an empowering little magician who finds in herself the resources to overcome obstacles.
Thus she embodies a whole lost generation of little migrants that inspired me with their appetite of life. She is their voice and gives a face to these children, offering them a positive reference model that will help them overcome their traumas and position themselves differently. She represents what they already have in them: life and joy despite everything.As you tell this story through an animated series, what other mediums of art do you enjoy and tell stories with?
I am someone who has always expressed herself through the double language of stories and drawing and character creation (I designed all the characters in Dounia). I think the animation medium is my natural way of saying things and telling stories. I am a visual person. I think in pictures and motion, but I am also fond of language, poetry, narration, and music. Directing the actors during the recording sessions was also something I enjoyed doing because I have a background in theatre, acting, and performing arts too.But I think the main thing for me is to find the stories first, create them into speech, characters, settings and worlds, and deliver them to an honest dialogue with the public. In that sense, I can explore any medium, as well as a live-action film, or an interactive experience (I have 12 years of experience in interactive design for children). Provided I feel it serves the aesthetic of the story and how it unfolds.