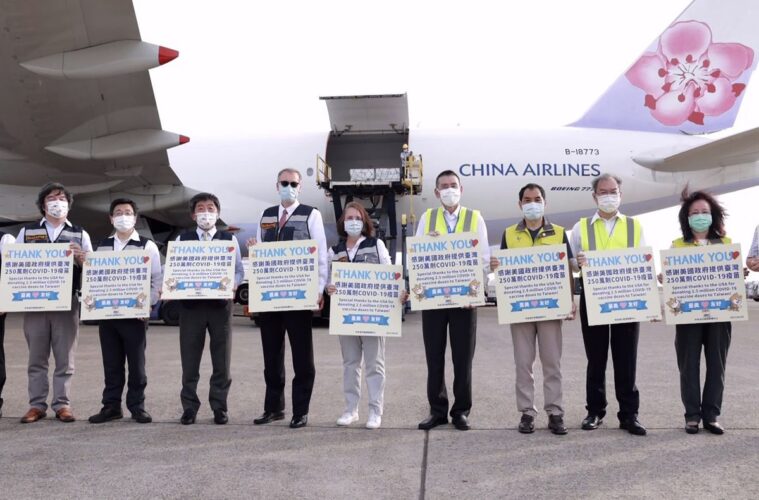 The United States is more than tripling its vaccine allocation to Taiwan. The island battles a Covid-19 outbreak and resists pressure from Beijing to take China’s homegrown inoculations.

Washington has shipped 2.5 million Covid-19 vaccine doses to Taipei. The US State Department spokesperson, Ned Price, tweeted on Saturday. The Moderna shots were set to arrive Sunday evening local time in Taiwan, according to the island’s Ministry of Foreign Affairs.

Wheels up! Our donation of 2.5 million vaccine doses is on the way to Taiwan, whose health partnership with the U.S. helped save lives here and around the world. @StateDept is proud to support @POTUS’ commitment to help the world defeat COVID-19. pic.twitter.com/J0rgy753bs

After a wildly successful initial run of keeping case numbers down, Taiwan is now battling its first major outbreak and scrambling to combat its low vaccination rate. Only 6 doses have been administered, per-100,000 people.

China, which considers Taiwan an integral part of its territory, has repeatedly offered to send coronavirus vaccines to the island. Taipei has expressed concern about the safety of Chinese shots. And accused Beijing of blocking its efforts to purchase vaccines internationally.

On June 6, the US pledged to donate 750,000 Covid-19 vaccine doses to Taiwan. Taiwanese President, Tsai Ing-Wen, heralded it as “timely rain” for the island of about 24 million people.

The US senators who visited Taiwan to make the announcement arrived on a US Air Force C-17 Globemaster III freighter. A primary strategic lift aircraft for the US military on a Taiwanese runway was seen as a major provocation of Beijing, as military tensions in the region heat up.

The U.S. donation also signals its support for Taiwan in the face of growing pressure from China, which claims the self-governing island off its east coast as its territory. The U.S. does not have formal diplomatic ties with Taiwan under what is known as the one-China policy but is legally bound by its own laws to ensure that Taiwan can defend itself.

Taiwan was previously heralded as one of the world’s success stories in controlling Covid-19. But they have now reported nearly 14,000 cases and 538 deaths.

After Saturday’s announcement, President Tsai expressed her gratitude to the Biden administration and bipartisan US Congress support on her social media platforms.

Deeply grateful to the #US, @POTUS & the Biden administration, @StateDept, & our friends in Congress & throughout the country. Your donation of 2.5 million vaccine doses will help save lives, & reflects the true friendship between our countries. pic.twitter.com/7fZLOF6KEd

Earlier this month, Biden announced that the US plans to donate 500 million Pfizer Covid-19 vaccine doses globally. It’s part of his efforts to reassert US leadership on the world stage.

G7 countries made similar pledges during the last summit. They agreed to donate vaccines to poor countries in efforts to achieve global herd immunity.