David Michôd’s loose adaptation of Shakespeare’s Henriad reflects upon power, betrayal and the painful weight of war.  After his acclaimed debut feature on a Melbourne crime family (Animal Kingdom) and dystopian drama The Rover, writer and director Michôd plunges into the historical genre with a fresh take on Shakespeare’s tetralogy of plays commonly known as the Henriad.

The film opens with young Hotspur (played by Tom Glynn-Carney from Dunkirk) on a battlefield covered in bloody corpses of rebel Scotsmen. Soon afterwards, when he is confronted by tyrannical King Henry IV (played by Ben Mendelsohn, who already worked with Michôd in Animal Kingdom), Hotspur accuses him of fracturing his kingdom. Sensing Hotspur’s upcoming rebellion, King Henry reacts with a mix of indignation and admiration for the young man’s boldness and impetuosity, “If only he were my son.”

Introduction to Timothée Chalamet as prince Hal follows. King Henry’s older son Hal is Hotspur’s complete opposite; he spends his days drinking in the dirty district of Eastcheap with his friend John Falstaff, shunning away from his responsibilities so much so that his father decides to make Hal’s younger brother Thomas king (Dean Chapman from Game of Thrones). Hal rejects his father because of the hatred and animosity the king has spread across his own country and, with him, he rejects war and power. Still, when it comes to protect his own brother and avoid the bloodshed of yet another battle, he proves to be lethal and skilled as he challenges Hotspur to man-to-man combat. When Thomas dies on the battlefield in Wales and King Henry passes away in his bed, a reluctant Hal has no choice but to become Henry V and almost immediately finds himself pulled into a war with France.

With the help of Falstaff and chief adviser William Gascoigne (Sean Harris), Hal marches on France, preparing for the battle of Agincourt. Teased and threatened by the Dauphin (Robert Pattinson), son of King Charles VI, Hal decides to fight even though his troops are vastly outnumbered by the French. The thoughtful critique of war and violence is brought to a whole other level in this battle, where Michôd shows us a grim, chaotic mess, with soldiers crammed, crawling and dying in the thick mud, under a fall of arrows and running horses. The directorial choices here recall recent war sequences, especially Miguel Sapochnik’s Battle of the Bastards (the battle of Agincourt was a historical inspiration for Game of Thrones show runners).  Hal’s victory brings no triumph, only the pain and greed of soldiers stealing from and surveying the dead. As Hal prepares to make peace with France by marrying the king’s daughter, the film ends with a further note on the futility of war and the unreliability of men in court, as Hal is forced to question the very reasons for which he started the conflict in the first place. 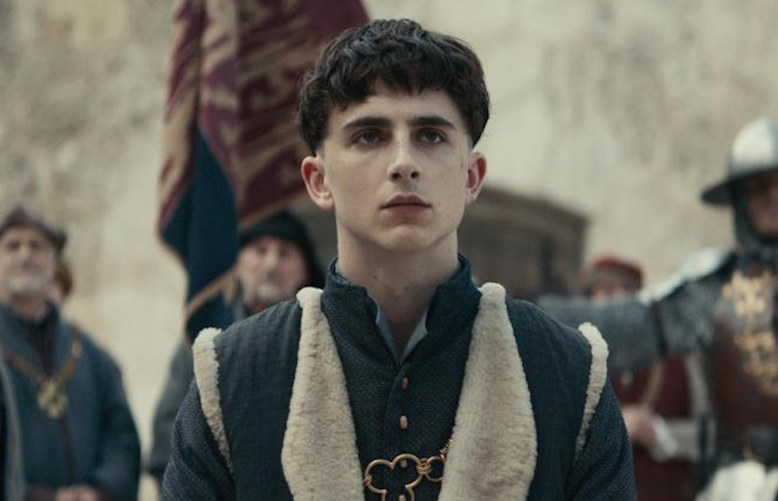 The King perfectly balances the intimate intrigues of medieval royal court with grand-scale battle. Still, the films biggest strength is its stellar cast, led by Chalamet, who expresses the conflictual evolution of King Henry V from peace advocate to a young king burdened by death and responsibility, with powerful intensity. Casting someone like Chalamet as the king, rather than an older man, is an innovative choice that works, especially because in the early 15th century people did not live long, and kings were often just boys with neither experience nor ambition, suddenly haunted by solitude and the power thrust upon them.

Edgerton, who co-wrote the script with Michôd, turns Falstaff into an honest man and Hal’s only real friend, someone who knows war far too well. Pattinson is a scene-stealer as the Dauphin of France with a comic French accent and the madness and cruelty of a young man who has lost his reason in a world of greed and violence. Finally, even though there is not much space for women in The King, both Lily-Rose Depp and Thomasin Mckenzie manage to transcend female stereotypes on screen, considering the time period when the film is set. Depp is Princess Catherine de Valois, who quietly pushes the king to question his own decisions while McKenzie is Hal’s sister Philippa, Queen of Denmark, who wisely warns him about the dangers of court.

The sense of doom in this thoughtful medieval drama challenges traditional war films (such as Braveheart) where battles tend to be glamourized and soldiers made heroes. In the end, Hal could not escape the war he loathed so deeply, but he is not the same boy he was at the beginning of the film, as he finally understands what Falstaff has told him: “A king has no friends… only followers or foes.”

For the latest in lifestyle, culture, and entertainment, keep up with us @HOLRMagazine

What kind of Condo can 12.2 Million buy you in Toronto?

Treat Yourself This Valentine’s Day

To Be The Best – The Legend of Kobe Bryant