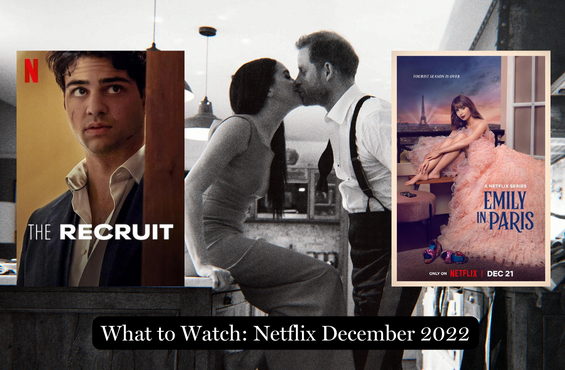 What to Watch: The Best on Netflix December 2022.

With the holidays just around the corner, this means more free time to binge Netflix! We’ve compiled a list of the most anticipated releases on Netflix in December. From new documentaries, to TV Shows and Netflix Original Movies.

Here are our top 10 picks for what to watch on Netflix in December.

The Meghan Markle and Prince Harry Docu-series on Netflix may be one of this years most talked about releases and its not even out yet! The first part of the docu-series will be released on December 8th, with the second part to follow on December 15th. Watch the Harry and Meghan Trailer below.

Watch the Emily in Paris trailer below.

Noah Centineo stars in this 8-episode drama series, which follows a CIA lawyer (Centineo) becoming entangled in dangerous international power politics. When a former asset threatens to expose the nature of her relationship with the agency unless they exonerate her from a serious crime, Centineo’s character is thrust into a world of chaos.

Watch The Recruit trailer below.

The Norwegian film Troll starts deep inside the Norwegian Mountain of Dovre. When an explosion awakens something ancient and destructive inside the mountain, the creature sets out to destroy everything in its path. Troll is an action, adventure and fantasy film. Troll cast includes  Ine Marie Willman, Nora Tidemann, Kim Falck, Andreas Isaksen, Mads Sjøgård Pettersen  and Kaptein Kristoffer Holm to name a few.

Watch The Troll trailer below.

Season 2 of Firefly Lane sees Katherine Heigl and Sarah Chalke returning to our Netflix screens. This season will reveal what ended the 30 year friendship of Tully and Kate forever.

Terry Seattle (Will Arnett) is back and this time, the case is critical because gasp, Santa is dead. Seattle is joined by celebrity guest stars Jason Bateman and Maya Rudolph, who must help him solve the case. The catch? Both Bateman and Rudolph were not given a script and have to improvise their way through this murder mystery while figuring out who did it?

Watch the Who Killed Santa? A Murderville Murder Mystery trailer below.

7. Glass Onion: A Knives Out Mystery

Watch the Glass Onion: A Knives Out Mystery below.

The addictive reality show we love to hate, Too Hot To Handle, is back for a fourth season. This time contestants join the villa under the guise of appearing on a new high stakes dating show called Wild Love, which is hosted by Mario Lopez. Little do they know, Lana is back to her old tricks and they’ll find out on the first day that this is not the reality show they had in mind upon signing up.

Watch the Too Hot to Handle Season Four trailer below.

Julia Haart and her family are back for season 2 of My Unorthodox Life. In this season, Julia gets very candid about the struggles she went through following her divorce from Silvio Scaglia. As shown in the media over the past year, Julia struggled immensely both personally and professionally during the divorce and this season offers an intimate glimpse into all of the drama that ensued.

Watch the My Unorthodox Life season two trailer below.

Based on the original graphic novel “Imawa no Kuni no Alice” by Haro Aso, season 2 follows Arisu as he tries to solve the mystery of “Borderland”. Along with his comrades, Arisu must take on even more difficult and dangerous games to be able to return to his original world.

Watch the Alice in Borderland season two trailer below.