The end of an era is here for Ellen DeGeneres who bids farewell to her talk show after 19 years.

DeGeneres, danced down the aisle of “The Ellen DeGeneres Show” for the final time on an emotional day for the host. The 19 seasons consisted of more than 4,000 celebrity interviews and many other segments. The final hour was both entertaining and sentimental. It started with a compilation of almost two decades worth of content where DeGeneres welcomed the audience to her show.

She then entered the studio for the final time to and overwhelming reaction from the crowd. Her wife, Portia De Rossi was also amongst the audience members.

“Today is not the end of a relationship,” DeGeneres told the audience. “It’s more like a little break — you can see other talk shows now and I may see another audience once in awhile,” DeGeneres joked.

The long-running talk show host then looked back at her journey from where it all began.

“Twenty years ago, when we were trying to sell the show, no one thought that this would work. Not because it was a different kind of show, but because I was different,” she said.

Degeneres added to her comments saying that many stations wouldn’t even consider having it on their network. She explained why as well.

Let’s take a look at the guests that came to the finale. DeGeneres ended things how she started almost 20 years ago – by having Jennifer Aniston on the final episode of her show. The nostalgia trip didn’t end there as Billie Eilish and Pink also made an appearance.

Aniston, who was her first guest back in 2003, had a conversation with DeGeneres about her own battles with the end of the famous TV show “Friends.”

The actress said that she got a divorce and then ended up going to therapy, she joked, a reference to her 2005 split from Brad Pitt. Aniston then gifted her with a welcome mat that said “Thanks For The Memories.” This was a throwback to the mat she brought all those years ago when she came for the first time.

You would expect any 16-year-old to be nervous on making their TV debut. This would be the definite case especially if the debut was with DeGeneres. Yes, this is a reference to Eilish

The singer, who was only 1 year old when the show debuted, also reminisced about her first time on the show, admitting “I was so scared!”

Eilish was terrified because the host had been a part of her life for as long as she could remember.

“You started this show the year after I was born. This was in my house constantly. Every day,” said the singer. “I would walk into the kitchen and my mom would be watching you.”

Pink was a season one musical guest. She finished the hour by performing her song “”What About Us.” The singer then followed the footsteps of Aniston and gave her some gifts. These included: homemade sourdough starter, birdwatching binoculars, knitting needles and jumbo yarn. She then paid a tribute with an emotional speech for DeGeneres.

“This is a very strange feeling for me because I’ve known you for so long, and you’ve meant so much in my life, personally, but in everybody’s life,” she said. Pink added that DeGeneres helped people find their joy in the world. 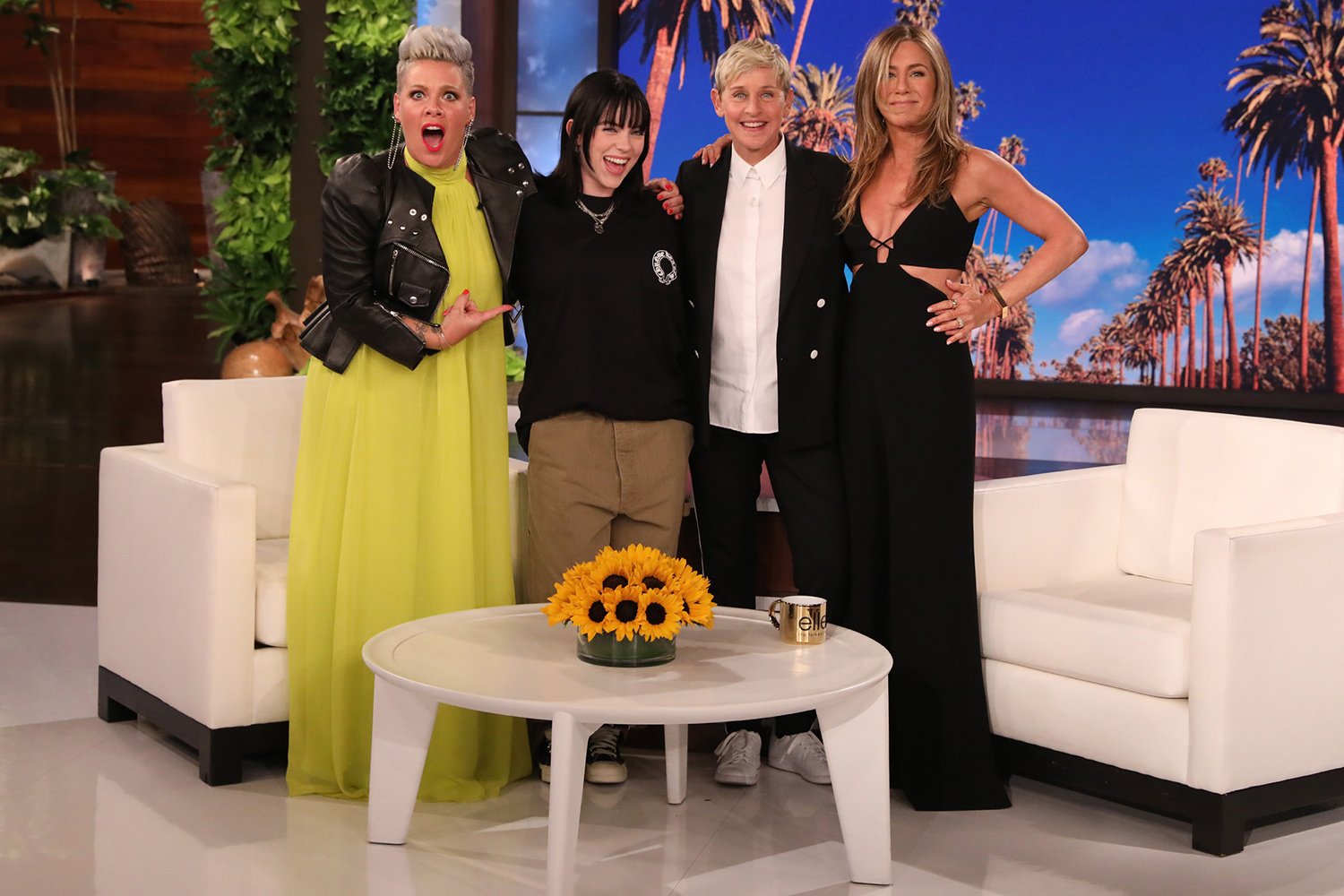 DeGeneres closed the show by giving a tribute to her crew. She gave a special mention to those who were important to the show’s success. The host talked about how her crew has loved and supported her. She also said that they nurtured her and helped her be her best. DeGeneres then expressed her love for them.

Her final speech was with tears in her eyes and it was for her viewers.

“To all of you who have watched me and supported me, thank you so much for this platform,” she said. DeGeneres added that she hoped she was able to make people happy and take their pain away in the last 19 years.

She continued, “And I hope I’ve been able to inspire you to make other people happy and to do good in the world, to feel like you have a purpose. And I’ve said it before, but I’ll say it again: If I’ve done anything in the past 19 years, I hope I’ve inspired you to be yourself — your true, authentic self. And if someone is brave enough to tell you who they are, be brave enough to support them, even if you don’t understand.  They’re showing you who they are, and that is the biggest gift anybody can ever give you. And by opening your heart and your mind, you’re going to be that much more compassionate — and compassion is what makes the world a better place.”

“Thank you so much for being on this journey with me. I feel the love, and I send it back to you,” she said, “Bye.”

DeGeneres glanced at the audience one last time. She then went to a couch in front of a television screen –  exactly how she opened her first show. DeGeneres turned the TV off and called it a day.