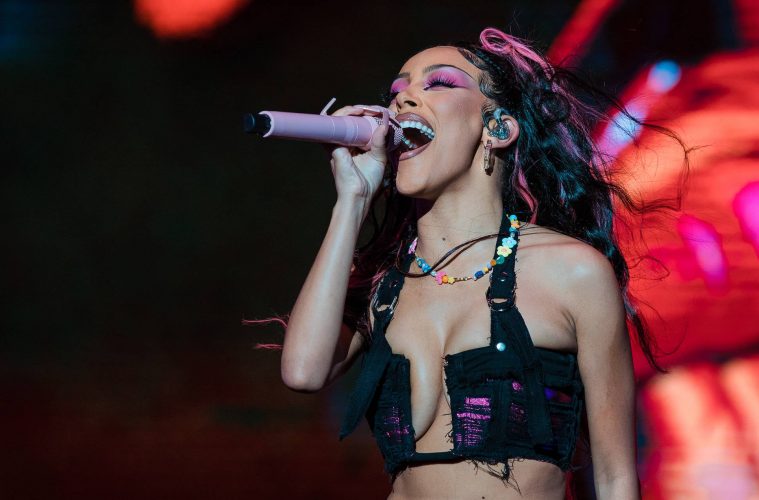 Doja Cat appears to have not made up her mind since she announced her retirement a few days ago on Twitter. She quickly changed her decision, but recent comments by the rapper sent her fans into another wave of shock and panic.

This has caused a lot of confusion, presenting the following question: Is Doja Cat quitting music?

The controversy began last week when Doja tweeted about feeling disappointed with her performance in Brazil.

“I don’t think I gave Brazil a good enough show tonight at all and I’m sorry for that,” tweeted Doja. “But thank you guys for coming out. I f**cking love you and thank god we got another show tomorrow, I promise I’ll do better,” she ended her rant with.

‘Another show tomorrow’ never came due to the cancelation of her headlining set at Paraguay’s Asunciónico. The festival was canceled due to flooding.

This caused a group of fans from Paraguay to ask why she didn’t apologize for the canceled show in their country. They said that Doja didn’t acknowledge the festival cancellation, the way she has done for other countries she visits. 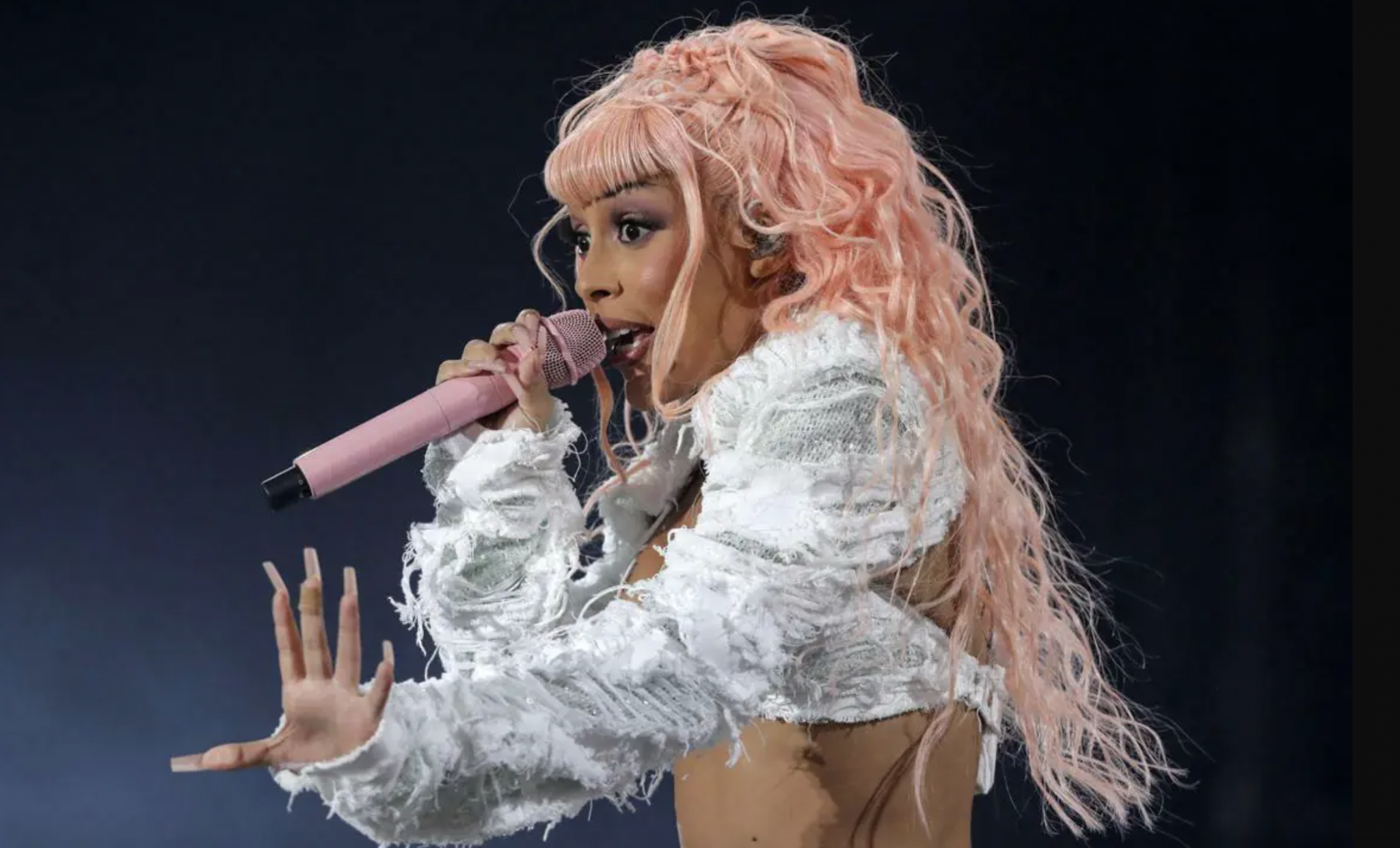 A tweet by a 26-year-old irate fan sent the musician over the edge.

“Doja, about 4 years ago you started to achieve fame and all thanks to Tik Tok. What happened to your humility queen? I loved you,” said the fan.

The musician answered the fan’s question about humility with no filter.

“It’s gone and i don’t give a f**k anymore. I f**kin quit. I can’t wait to f**king disappear, and I don’t need you to believe in me anymore,” she said. “Everything is dead to me, music is dead, and I’m a f**king fool for ever thinking I was made for this. This is a f**king nightmare. Unfollow me,” concluded Doja.

Another critic posted a photo that called the rapper “Public Enemy #1” and captioned it, “it’s too late to apologize,” to which Doja replied, “I’m not sorry.”

She also said that, “she has moved on,” and “she is just going to let everybody be mad.” Doja also declared that she is not taking pictures with anybody else after this tour.

A few minutes later, in the early hours of March 25, Doja tweeted: “This s**t ain’t for me so I’m out. Y’all take care.” She then changed her Twitter name to, “I quit.”

A few hours later, Doja appeared to have a change of heart. She hopped on Twitter to issue an apology to her fans for her previous and recent outburst. She also removed “I quit” from her Twitter handle. 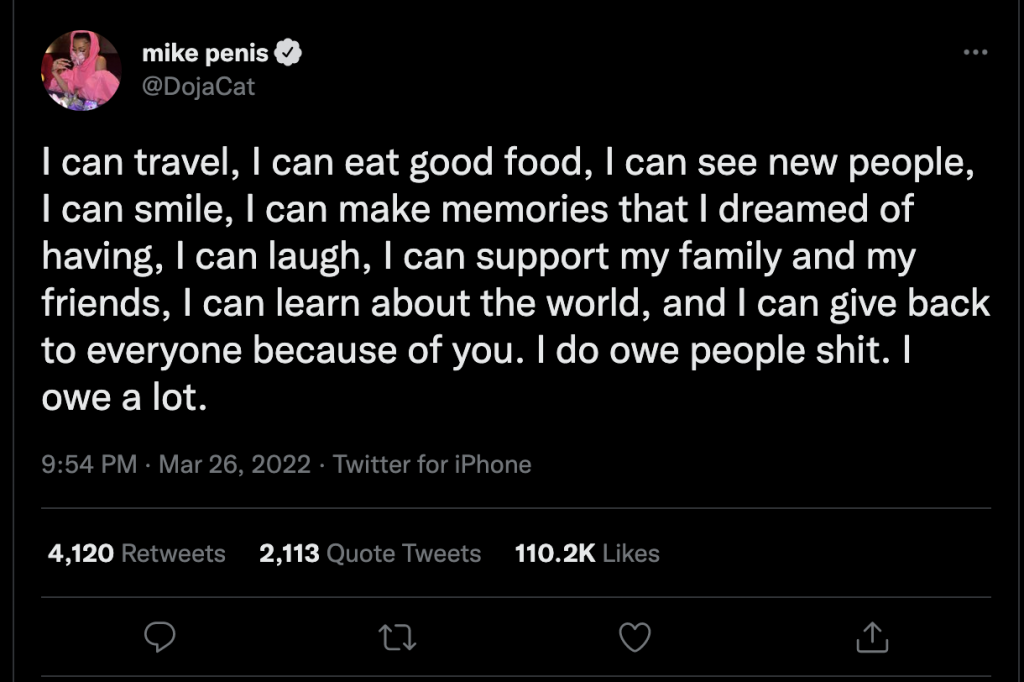 Doja continued, “I owe myself a lot too. I owe myself the chance to open up and be good to people. I owe myself the death of my fears that don’t allow me to expand my heart.” She also said that coming to a country where she can do something everywhere else would be pointless.

The talented start continued in a string of vulnerable tweets, expressing that she is not giving enough to her community. Doja also told her fans to not hesitate to ask her for anything because she loves them. She described the ambitious pressure she puts on herself “fears that don’t allow me to expand my heart.”

Doja then went back and quoted her earlier tweets, taking back her statements and apologizing. A few fans attempted to comfort her and apologize for harsh words, to which she admitted that she “wasn’t any better.”

Is She Still Quitting?

After a bumpy ride on social media and going back and fourth with herself about quitting her music career, it looks like she is.

Doja responded directly to Florida radio station MIX 105.1, who speculated, “Ok so maybe @DojaCat isn’t retiring” on Monday (March 28) alongside a story about her apologizing for saying she was quitting in the first place.

“Yes the f**ck I am,” she commented, starting another ruckus amongst her fans.