As a kid, the first time Andy ever saw a shark was on TV—during Discovery’s Shark Week. His fascination and respect for these apex predators would only grow from that moment onward; eventually leading him to be one of the highly respected hosts, cameramen, and producers on the programming that he admired as a child.

With countless film and television projects under his belt for some of the world’s top tier media networks, Andy Brandy Casagrande IV has spent his life capturing awe-inspiring footage of incredible wildlife and wildernesses. He has spent hours underwater and uncaged with white sharks; he is an Emmy Award winning cinematographer for the outstanding footage he captured for National Geographic’s Great Migrations documentary; he is a champion of conservation, working with leading environmental conservation organizations like SeaLegacy; and he is visionary storyteller,  hoping to inspire fascination and ultimately inspire change.

In between him diving into new projects, we caught up with ABC4Explore to talk about all things sharks, life, and this weekend’s important vote to help protect the critically endangered mako shark. 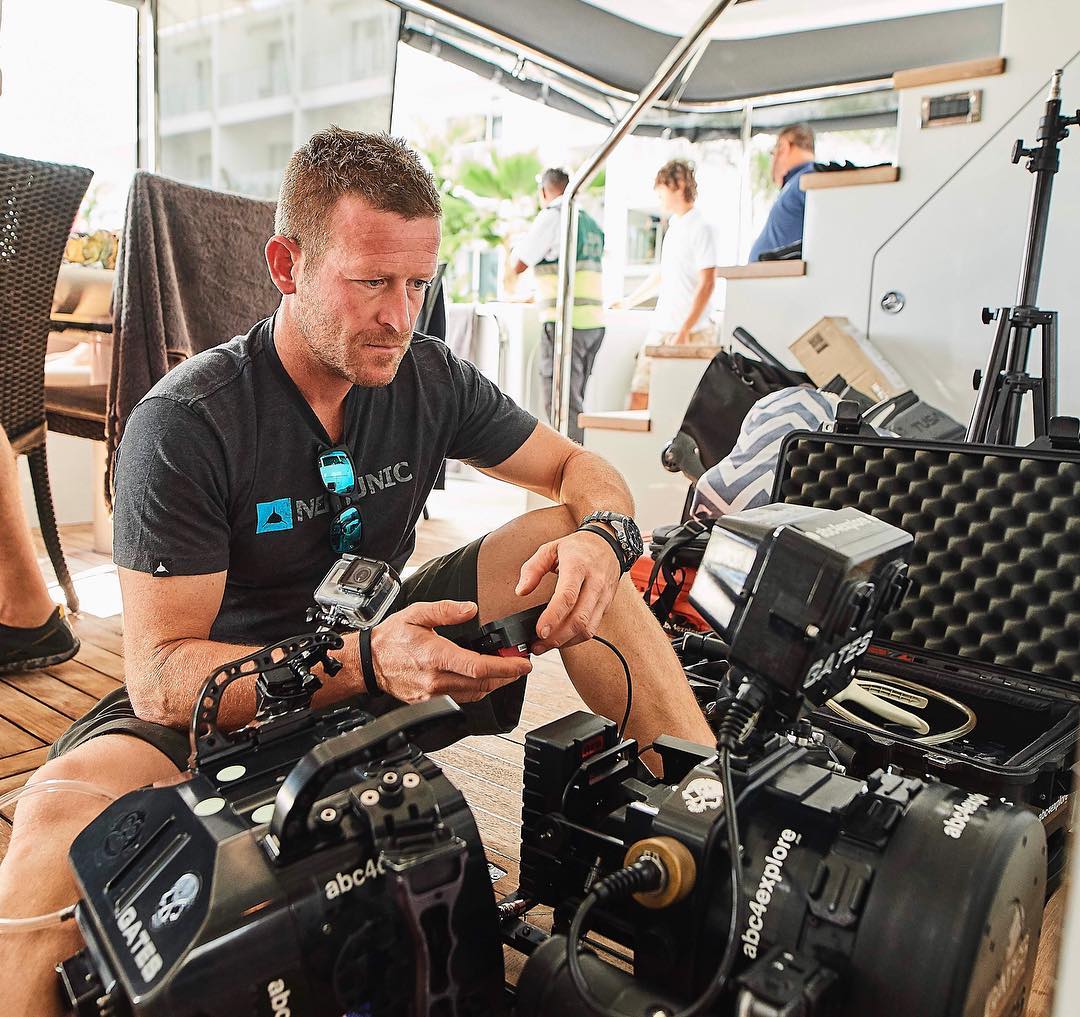 What originally got you passionate about sharks?

My passion for sharks started when I was basically this super small, young kid. I fell in love with sharks through my experience of seeing them on television. I was born in New York City—the concrete jungle—so the first time I saw a shark was through media—through television—and something in my brain just switched on.

I remember my parents telling me to never believe everything you see on television, telling me that if superman jumps off a building not to think I could do the same because a lot of things in television are make believe. So, when I first saw a great white shark on the screen, I thought ‘well that thing is so unbelievably incredible that it has to be make believe’—I remember thinking they were so cool, but definitely fake. When I discovered they were in fact real by continuing to watch documentaries, well, then I became even more fascinated with them. I read books, listened to stories, watched the different programming from National Geographic, Discovery, B.B.C., and became utterly and completely obsessed.

Originally I wanted to become a marine biologist. My first year of university I was enrolled in marine biology before quickly changing my major to journalism. I realized that I would be a much more effective filmmaker and storyteller as opposed to a marine biologist. Now I get to go all over the world for work and shoot alongside the world’s greatest shark scientists and storytellers. To think, it all started in childhood, just through seeing a shark on TV.

What was your first experience with sharks in the water?

My first actual experience with any shark was on the Great Barrier Reef in Australia. It was with a white tip reef shark and I won’t lie, I was extremely underwhelmed [he laughs].

My whole life I saw all these great white sharks on television, and I couldn’t wait to see these super predators in real life. Then I see this three-foot, small, White Tip reef shark and was like ‘wait, what?’.  But, what ended up being cool about the experience was that it opened my eyes to other types of sharks, and realize that there are almost five hundred unique shark species with different looks, feeding habits and personalities.

So, yes, although it may have been underwhelming at first, it sparked more interest in sharks in general, rather than just the great whites.

Now, my first experience with a Great White shark was in Cape Town, South Africa. I was working for the White Shark Trust, a nonprofit research team that was conducting studies on population dynamics, Great White meat, and doing dorsal fin identification for a population census. That was back in 2002. We were in this small little six-meter research vessel and the first white shark that swam by was this 13 foot, four or five-year-old shark. It was incredible to see this supposedly blood thirsty predator casually swimming by, totally uninterested in what was going on–just cruising, existing and doing its thing. 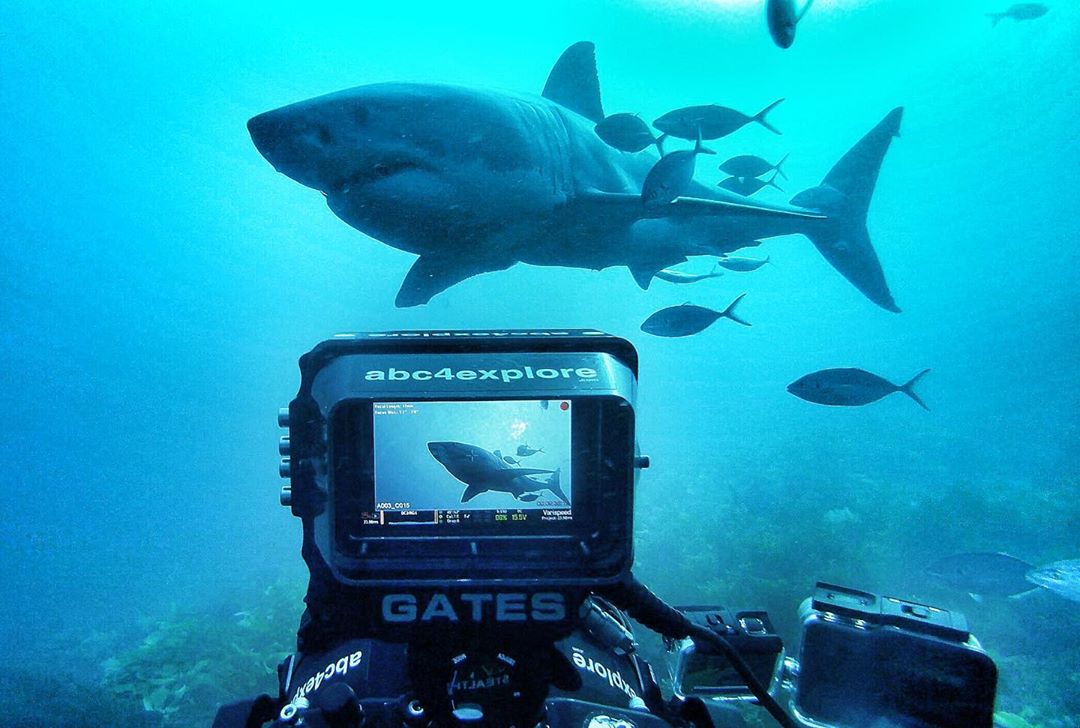 As apex predators, sharks get a bad rep for being man-eating, mean machines. Programming like Shark Week draws quite the audience, but of course, as with everything, it also draws criticism. Shark Week as much as it seeks to educate and instill fascination in people, it does utilize the fear tactic too. Are you ever worried that the footage you capture and turn over to the editing teams will be used in context you don’t necessarily agree with?

As a cinematographer it’s my job to capture incredibly compelling images. I pride myself on trying to capture the best quality visuals I can because as a kid, those images on television were what inspired me.

However, as a cinematographer I don’t have control of the end product and in our world today, I do sometimes feel that networks go overboard hyping up the fear factor because it drives ratings. That being said, it’s a balancing act and I do feel like networks are starting to realize that they have a role to play in educating and inspiring, as well as entertaining. Their programming has the power to create negative reactions to sharks just by the music they pair with their content and their editing style. Increasingly, I think the networks are trying to sway towards content that incorporates more adventure, more research, and leverages more impactful, intriguing shots of sharks, rather than just the low hanging fruit content that drives ratings by using fear.

If you look back at Shark Week over the years, at one point predominantly the content was fear mongering, which caused backlash. Then it went into more science, which also caused backlash. The reality is Shark Week isn’t strictly science week, nor should it be. It’s a week that should inspire people to love sharks through a number of different types of content: whether through science, adventure, exploration, or even through my least favourite, over dramatized fear mongering content. 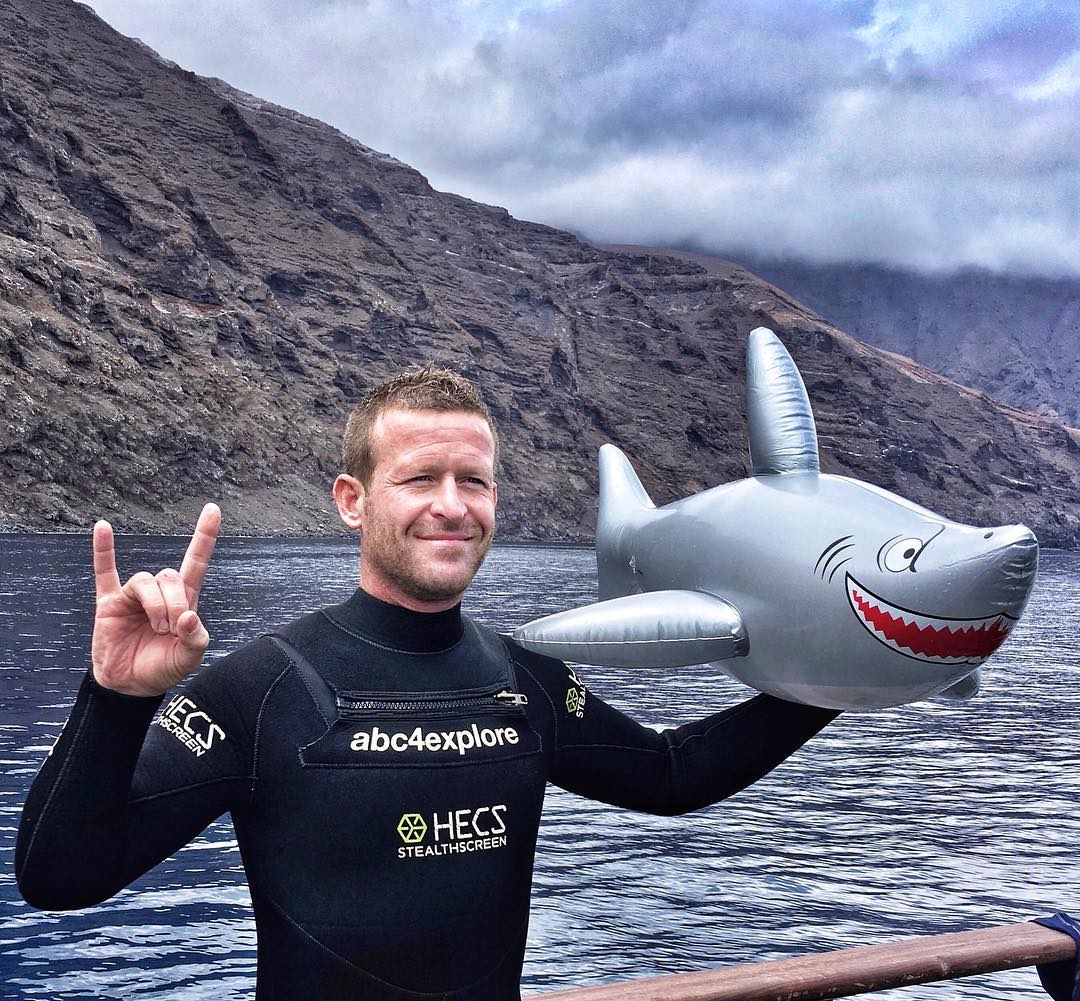 You’ve filmed in a variety of different wildernesses and terrains and won the Outstanding Cinematography Emmy Award for the work you did for the National Geographic documentary Great Migrations. Aside from filming in the ocean, where has been your most memorable place to film?

My most memorable location was up in Canada with the polar bears in Churchill, Manitoba. I was outside of my element, but being in the freezing weather on snowmobiles with polar bears—or even being on foot by them—was so incredible. Seeing the Aurora Borealis at night too was just unbelievable and one of the most magical experiences ever. 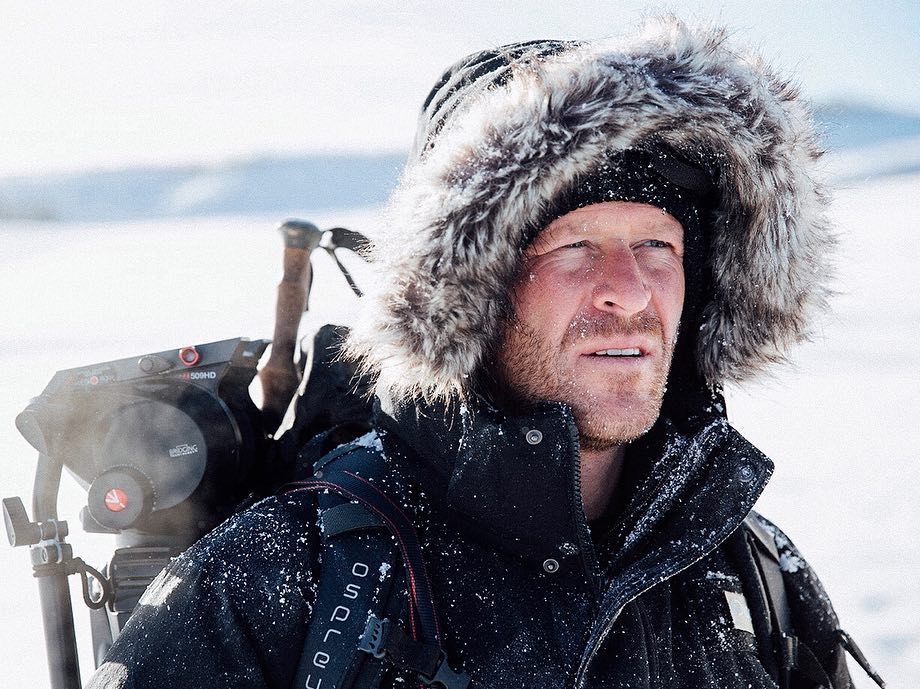 What would you say is the greatest threat to sharks?

Fishing and consumption are billion dollar industries surrounding sharks—whether it’s shark fin soup, cartilage, their oil, or their meat. Yes, people eat animals, but we have an obligation to consider their sustainability. When harvesting an animal is permitted to the extent that the animal is unsustainable, than the rate at which we are harvesting them needs to slow down–we need to put ourselves in check. Basic human greed is what is driving sharks to extinction, whether it’s a cultural phenomenon or otherwise.

Can you tell us about the Convention on International Trade of Endangered Species (CITES) and the vote that is happening this weekend in Switzerland?

CITES is an incredible organization that focuses on protecting endangered species through trade limitations and protective measures that are put in place by nations and governments and not just by biosphere reserves. This means that the actual species itself is protected. It’s one thing to create a marine park and everything within that park is protected, but the reality is, sharks don’t have passports. They can travel anywhere in the world and they do. They migrate between continents, between hemispheres, and they go wherever they want, whenever they want.

CITES is a group of countries and people who analyze research like catch records and sightings, to determine and come to a consensus as to whether a species is in danger enough to warrant them protection.

Right now, there’s a worldwide push to protect the mako shark. There are pages of research that have deemed them as critically endangered. The thing about makos is that although they are the fastest shark in the world, they still can’t out swim humans.

Commercial fisheries and sport fisheries target them specifically and have caused them to become so vulnerable. Unfortunately, for people to care about something to the point that they want to act upon it, they have to be directly affected—and because mako sharks are not directly in everyone’s faces, people assume the species decline won’t have any impact on their lives. What people forget is that they are a great predator that hunts often, which helps keep the balance of the ecosystems. When you remove these top predators there is a cascade effect, messing up the entire ecosystem—which then affects all humans. Over 70% of the oxygen we breathe comes from the ocean, and if the oceans aren’t healthy, well, then humans innately will be unhealthy.

This weekend, CITES is pushing a lot of nations to vote yes to protecting mako sharks. It seems however, that Canada is thinking with their bank accounts rather than their brain accounts. Their vote of no means they want to continue commercially fishing these sharks even when there is proof from conservation organizations and scientists around the world that say this species is in critical decline. Since Canada outwardly declared their plan to vote no, there is a big effort to try and get them to switch their vote. There’s a petition that was started by SeaLegacy that outlines more research and is gathering signatures to drive home the point that we need to protect these sharks. 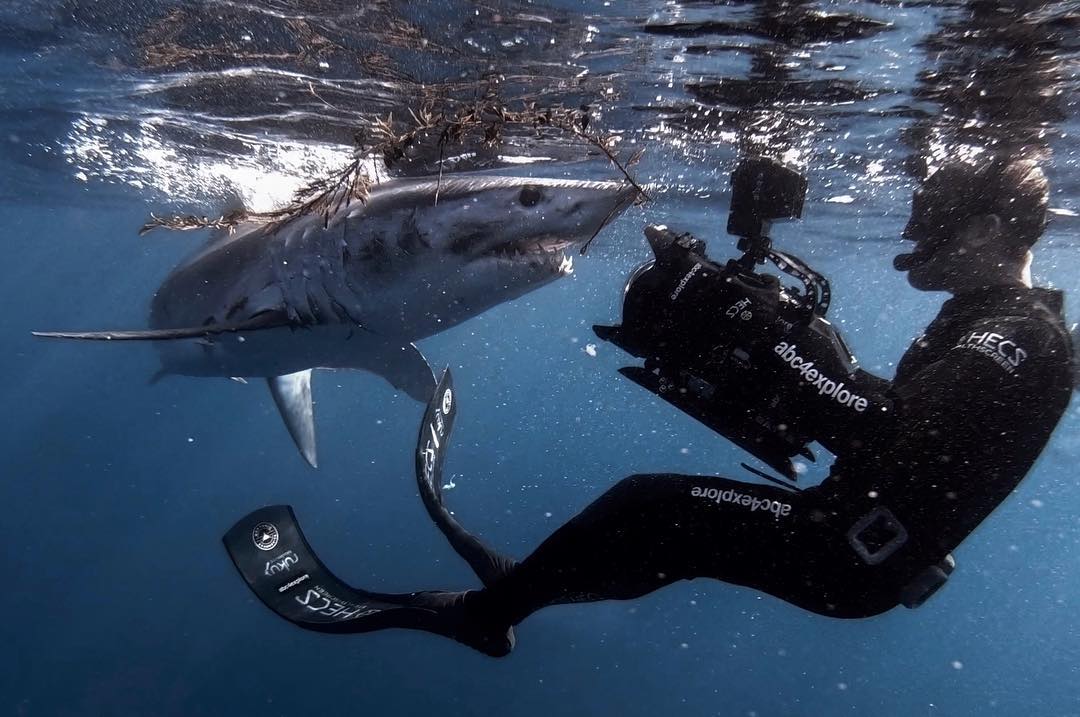 What can we do to help the shark conservation effort?

One very simple way is to create awareness. Getting involved is easier than you think. Donations aren’t the only way to help the cause, even changing a single person’s perception of sharks goes a long way. Social media is an amazing platform to spread the message. Sharing petitions that protect conservation, spreading organizations like SeaLegacy’s messages, and just putting these efforts on people’s radar helps.

To sign the petition and join the fight to protect mako sharks, visit SeaLegacy.org.

For more lifestyle, fashion, and culture — follow us  @HOLRMagazine.