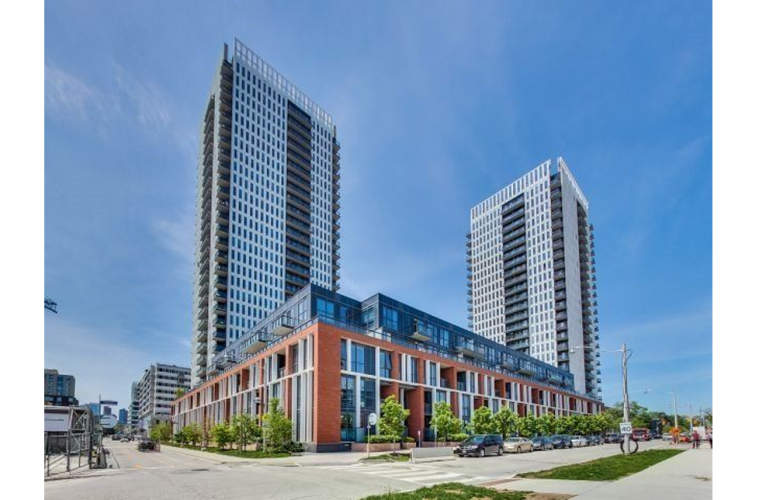 Of the many (many) neighbourhood’s in Toronto, few have had as tumultuous a past as Regent Park. Through multiple reworking and redevelopments, mistakes and lessons learned, a new community and new look is emerging in the neighbourhood once so laden with negative stigma. Today we’re going to be looking at the history of Regent Park, and why we’re so excited for the future of this neighbourhood.

In the earliest days of the city, the area we now know today as Regent Park was known as Cabbagetown. Named for the crops that the largely British and Irish immigrants would grow on their lawns, Cabbagetown was a home for the working class. The area soon sprawled into a community known for its crumbling slums and low standard of living.

Concerns over crime and social problems arose around the time of WW2. By 1947, the government stepped in and the Regent Park public housing project was approved.

Regent Park was designed to be a “Garden City”, with buildings placed in a pastoral setting. The red and grey brick public housing units faced inwards on themselves, with green lawns and walking pathways designed to create a sense of community and to tune out the noise of the greater city around them.

Unfortunately, this design also lead to a number of problems. Regent Park became cut off, with no major streets for the TTC to run through. The numerous housing buildings had been constructed without any consideration to include businesses or shops, giving no one outside of the community any reason to visit. The lack of local resources also made obtaining necessities difficult for the often-impoverished local citizens.

The public housing units that made up the entirety of the neighbourhood were home to many of the poorest citizens of the city. Many were new immigrants looking to get their first foot in the door and eventually move on up and out. This turned out to be more difficult than planned however, as the income-based housing allotment system practically penalized those who began to earn more, leaving little incentive for some to search out higher paying jobs.

The committee who handled allotment of the housing space also favored families with children, aiming to look after and provide for the future generation. A high population and no recreation facilities left these children with little to do, and the stigma quickly growing around the area made it difficult for them to gain higher education and work in the surrounding neighbourhoods. The area gained a reputation for crime which, as so often happens in urban centres, arises from the combination of poverty and lack of options to escape it.

While the city maintained its dour opinion on the neighbourhood, there were things about it that citizens enjoyed. The sense of community very much was there; it felt like its own little village where everyone knew each other, and a neighbour was often willing to step up and help where possible.

However, the cheap building materials of yesteryear were beginning to become a problem, and the city lacked the resources to repair the outdated structures. Regent Park, the “garden city”, was now considered as much of a slum as the former Cabbagetown. The neighbourhood’s name became laden with negative connotations in the media which only continued to compound the difficulties its citizens had obtaining employment and upward mobility. All of these issues, along with staunch social activism from its tenants, made the city at large take notice, and a new plan was formed.

The government began a new chapter in the history of Regent Park, looking to again demolish the area and rebuild, but this time with the lessons of past mistakes firmly learned. In the early stages, a renaming was even suggested to shake negative preconceptions about the area, but developers decided they’d rather double down, embracing the history of the neighbourhood and the community it contained moving forward.

The new Regent Park would mix public and private interests, aiming to upgrade and replace previous public housing units with more condominium and townhouse inspired structures. These would be mixed use and allow for both subsidized housing and private sales and rentals, integrating the current population with newcomers to the prime, downtown-adjacent location. All citizens of the old Regent Park were promised a right of return to new units when they were built, at no increase in rent. The residential buildings were planned to sport around 2,000 replacement rent-geared-to-income units, 448 new affordable rental units, and 5,400 new market condominium units.

The revitalization also aimed to reintroduce businesses and amenities to the area. With the freed space, Regent Park now sports a Freshco, Rogers, Tim Hortons, RBC and Shopper’s Drug Mart.

Modern recreational facilities are also being brought to the space, with a new aquatic centre, parks, athletic grounds, and the Daniels Spectrum cultural centre.

With all of this reshuffling, main roads have also been reintroduced to the community, linking and integrating the space with the rest of Toronto and the TTC lines.

Redevelopment is still ongoing, with phase three expected to be completed in 2021, and more to come onwards in phases 4 and 5 for a number of years to come.

The Future of Regent Park

The history of Regent Park is long and storied, but its future now looks brighter than ever. It’s now one of the fastest growing and up-and-coming neighbourhoods in the city. Its prime location puts it a mere 20 minutes away from downtown via streetcar, and just a short jog from the Don Valley Parkway. With the sparkling new amenities and modern architecture, Regent Park is a fantastic place to consider moving into now that it is open to both standard residential purchasing and its original, close-knit community alike.

The new recreational and business opportunities provided by the revamped community setting make Regent Park an ideal place to live, as the neighbourhood reintegrates into the city at large. New restaurants are popping up along the edges of the community, with the crown jewel in the heart of Regent Park being the Paintbox Bistro. They source their food locally and hire locally, looking to preserve and elevate the history of the community. A massive park in the heart of the area keeps its original name close in mind, providing plenty of open space. The Regent Park Acquatic Centre (now the Pam McConnell Aquatic Centre) is the envy of the whole city, featuring a 25-metre lap pool, leisure pool, spa pool, tarzan rope, diving board and water slide.

Much has been done, but the revitalization is not complete yet. The city of Toronto has been diligent in keeping the community up to date and involved with the process of what will be going into the final phases of development, and eager builders are lining up to put their best foot forward.

Regent Park remains a multicultural, multi-faceted neighborhood, and an example of a city working to improve throughout history to best serve the people within it. We are so excited to witness the future of this community, which sits just moments from our own home in western Leslieville. If you’re interested in moving to Regent Park and joining this wonderful, historic neighbourhood, reach out to us here!