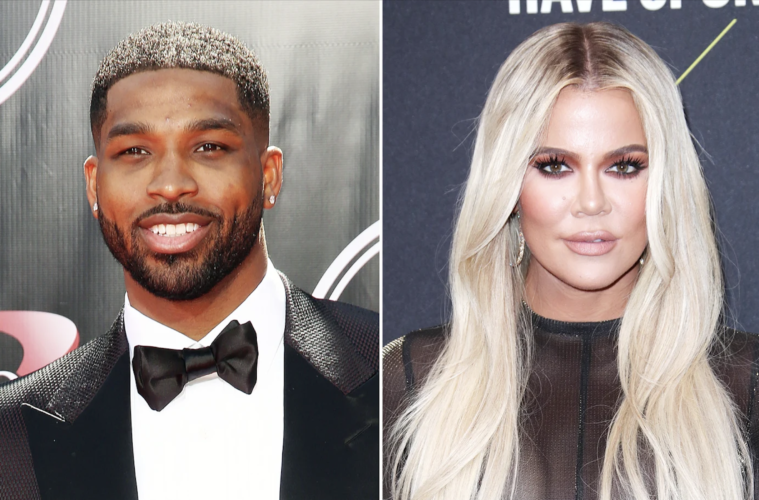 Khloe Kardashian and Tristan Thompson are expecting their second child together after going through a series of breakups and cheating allegations.

The couple is expecting another child through surrogacy. Holr is taking a look back at Tristan and Khloe‘s whirlwind courtship including a cheating scandal that broke two days before the birth of their daughter True, who was born in April 2018. Check out the relationship chronology below and recapture the ups and downs of the KUWTK star and the Canadian basketball player:

Kardashian and Thompson were photographed leaving a club together, sparking romance suspicions. Images of Kardashian leaving Hollywood’s Bootsy Bellows nightclub with the NBA player were released.

During an appearance on Jimmy Kimmel Live! in November 2016, Khloe talked about her affair with Thompson. “I live here, but I’m in Cleveland,” she told the late-night show. “I truly enjoy being in Cleveland.” It’s actually rather appealing to me. I enjoy having my routine and remaining somewhat anonymous. It’s lovely.”

The couple spent the holidays together and turned to Instagram to wish their fans a Merry Christmas. On Christmas Day in 2016, Thompson captioned a lovely snapshot of himself and Kardashian wearing identical fur jackets, “Merry Christmas & Happy Holidays from me and mine, to you and yours.” 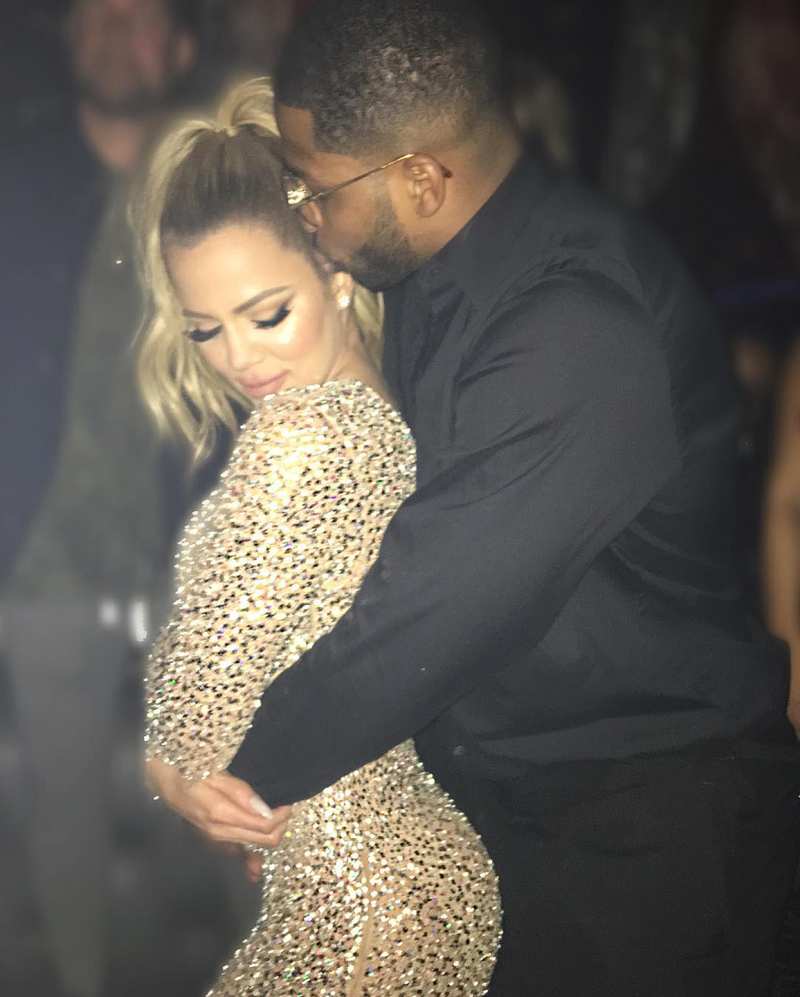 On New Year’s Eve, Khloe and the NBA champion danced in each other’s arms. “A very happy New Year!!! “May you always be surrounded by the love you deserve,” Kardashian captioned a heartwarming photo of herself smiling in Thompson’s arms as he kissed her ear. “May God continue to shower his blessings on us all!”

The former DASH owner recently expressed her desire to marry Thompson, in April 2017 that she has “never been in this type of love” and that she “absolutely, would” marry him if he proposed. “I’d like to start a family.” We’ve discussed it… “I know he would be an excellent parent,” she continued, adding that the couple is not in a hurry to have children together. “I know I want to be a mother. But I’m not putting any strain on it. It’s not like there’s a clock ticking. “I have a feeling it will happen.”

“I’m in the best relationship I’ve ever been in, and I don’t need a ring to feel that way,” Kardashian said of her romance in an August 2017 interview. “My boyfriend is very protective of me. Feeling loved and validated and secure is a huge thing. Tristan is protective of my entire family, which is beautiful.”

Khloe explained how she met Thompson in an exclusive sneak peek from the Keeping Up With the Kardashians Ten-Year Anniversary Special. “I was assigned a blind date with Tristan,” she said. “Brandon Jennings, a basketball star who is a friend of mine and Malika’s, says, ‘You’re such a good girl, I want to introduce you to someone.” I was staying at the Bel-Air Hotel. Brandon showed up at the dinner because I didn’t want to go on a blind date, so he kind of ambushed the blind date. So I had a group of folks with me, and he brought him, and we instantly clicked.” 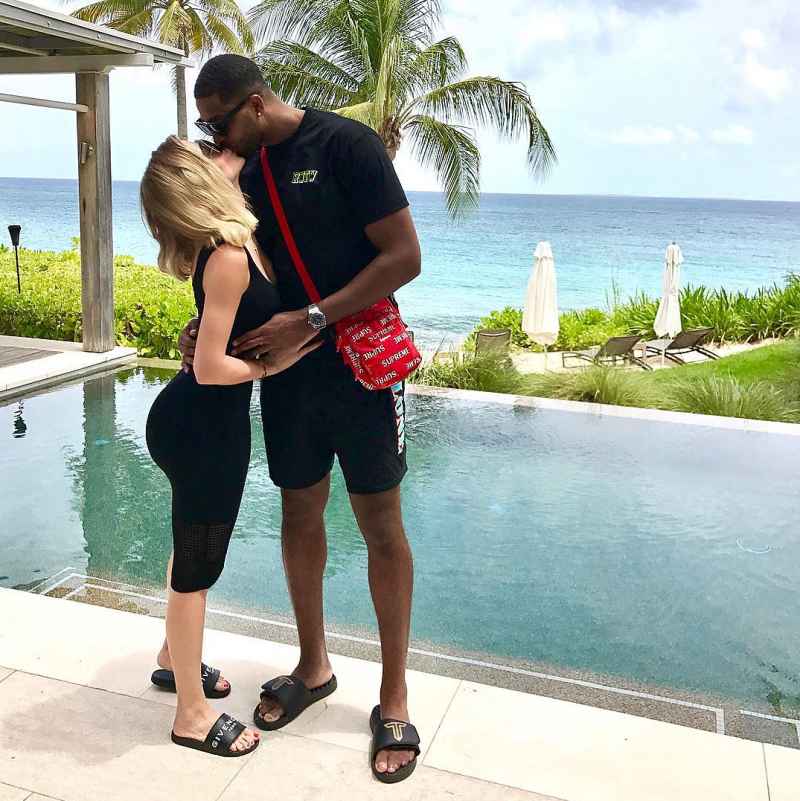 On October 16, 2017, Kardashian posted a photo of the couple kissing. “My Love,” she said. It’s assumed that the shot was taken while they were pregnant with their first kid.

On December 20, 2017, Khloe announced her pregnancy on Instagram, stating, “My greatest dream realized! We are having a baby! I had been waiting and wondering but God had a plan all along. He knew what He was doing. I simply had to trust in Him and be patient. I still at times can’t believe that our love created life! Tristan, thank you for loving me the way that you do! Thank you for treating me like a Queen! Thank you for making me feel beautiful at all stages! Tristan, most of all, Thank you for making me a MOMMY!!!”

Kardashian posted a lovely selfie of herself kissing Thompson on January 2, 2018, the same day she claimed she’s “officially 6 months” pregnant. “Mom and Dad,” she captioned the photo.

Following the passing of Khloé’s dog Gabbana on January 31, 2018, Thompson brought her a lovely gift. She posted a photo of a flower arrangement comprised of white and purple roses in the shape of a large paw print on Instagram, “Thank you baby for being so attentive!” This lovely bouquet brightened my day! My love, you are the sweetest!”

The NBA athlete and Khloe spent Valentine’s Day together. “‘When a woman is loved correctly, she becomes ten times the woman she was before’ Thank you, my love,”  she captioned an Instagram photo of them smiling in front of a display of balloons spelling out “I 3 U” on February 16, 2018. The Cleveland Cavaliers player and reality star clutched her pregnant bump while wearing a form-fitting strapless red gown that was perfect for the celebration.

On March 10, 2018, Khloé hosted a pink-themed baby shower at the Hotel Bel-Air in Beverly Hills, California, with her beau by her side. The couple posed for photos in front of a “Baby Thompson” sign, surrounded by pink balloons.

Kardashian gave birth to her first child, a girl, on April 12, 2018, in a Cleveland, Ohio hospital. The kid arrived just days after it was revealed that Thompson had been cheating on her. When Kardashian found out, she was shocked. Kardashian disclosed the name of their daughter four days after she was born. “Our beautiful baby, True Thompson, has absolutely grabbed our hearts, and we are overwhelmed with LOVE,” she captioned a photo of pink balloons, flowers, and stuffed animals on Instagram. “It is such a gift to have this angel join our family! True, your parents adore you!”

In May 2018, a source told that the twosome was “totally back on” after the NBA player was discovered cheating. After a month, the reality star went out about her decision to stay with Thompson. “You have no idea what goes on in our household or the huge rebuilding this requires just to coexist,” Kardashian responded to a fan on Twitter in June 2018. “I’m proud of my fortitude.” I value your viewpoint, and I hope you share it with everyone else who has remained in situations.”

The couple spent Thanksgiving 2018 in Cleveland together, following the NBA star’s cheating scandal on Keeping Up With the Kardashians. “I’m soo blessed,” Thompson said on Instagram, beside a photo of himself embracing Kardashian and True. “Happy Thanksgiving from my family to yours #GiveThanks #blessed” 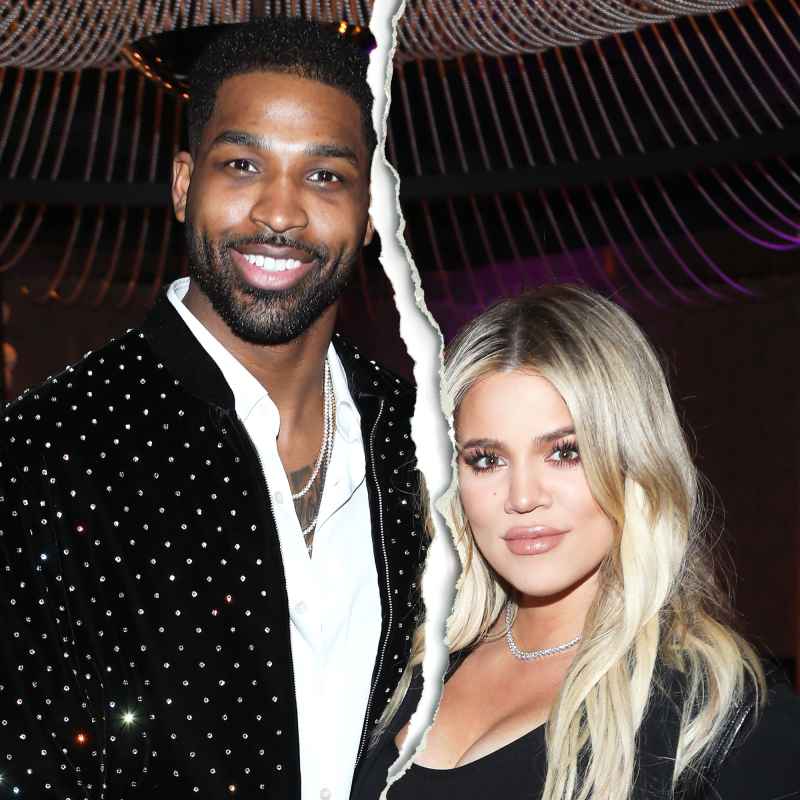 The couple called it quits in February 2019, ten months after the NBA star was caught cheating. Their split occurred only days after the Keeping Up With the Kardashians actress spent Valentine’s Day alone, while Thompson allegedly flirted with women in a Los Angeles bar.

Kardashian and Thompson reconnected at their daughter’s first birthday party in April 2019, two months after the scandal with Woods. When the party was featured on Keeping Up With the Kardashians, fans discovered that Thompson had tried to kiss his ex before the party.

Thompson made news in the months following the Woods affair for writing flirtatious comments on Kardashian’s Instagram posts. However, according to a source, Kardashian was not interested in reuniting with the athlete. 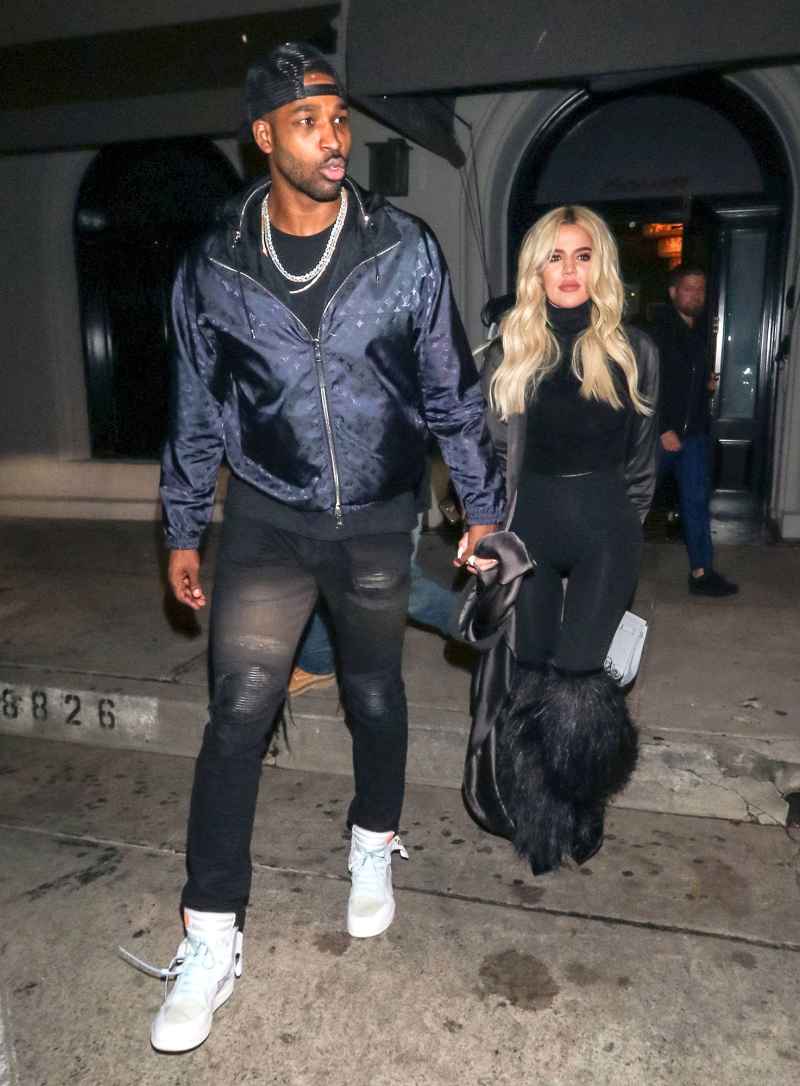 “Khloé and Tristan have been spending time together, mostly with True.” “Tristan has told Khloé that he wants to reconcile,” a second insider added. “Her pals are anxious that Tristan is missing out on the lifestyle and privileges that come with dating a Kardashian.”

According to multiple sources, the couple was back together in August 2020 – and talking about their future. “Khloé would love to give True a sister because she is at the perfect age,” a source revealed.

In a Keeping Up With the Kardashians clip, Khloe stated that she was “ready” to conceive baby No. 2 using frozen embryos. “That’s what I like to hear,” the athlete responded, adding that he was “all for” True having a sibling. 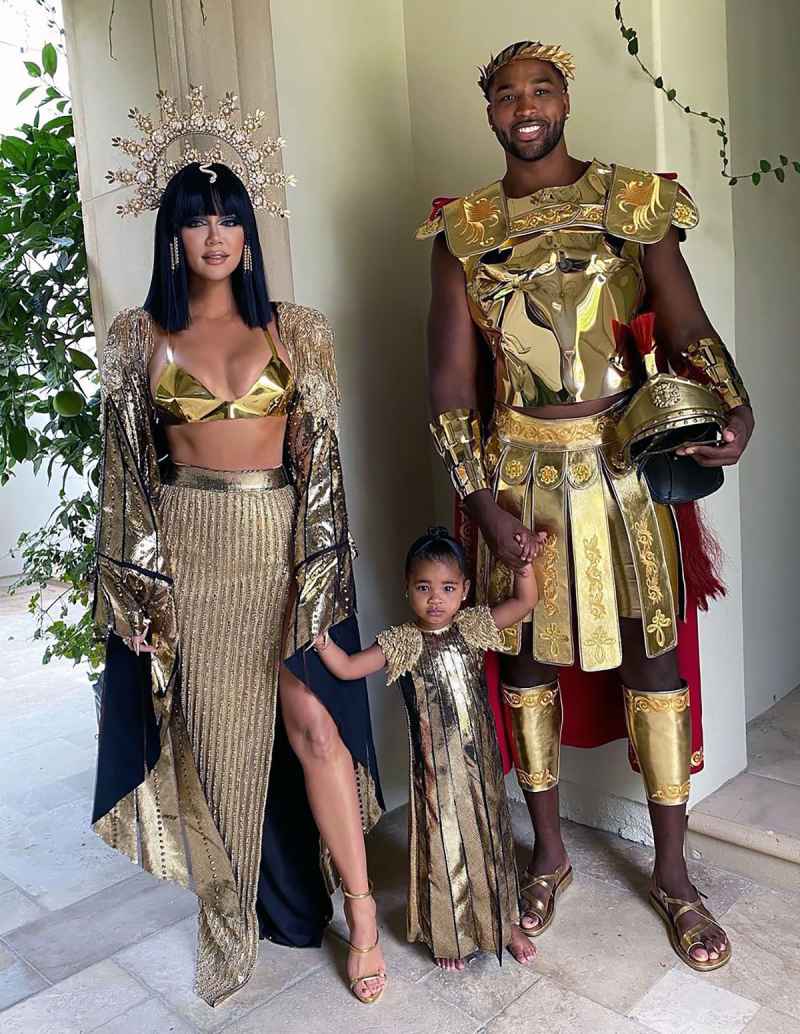 The couple “split up a few weeks ago,” and they are “still cordial toward one other and will continue to co-parent.” “There was no drama that broke them up,” the insider continued, “things just didn’t work out between the two of them.” The breakup announcement came only one day after part two of the Keeping Up With the Kardashians reunion aired.

Thompson revealed the fatherhood of Nichols’ son on Instagram Story on January 3. He also offered a public apology to Kardashian at the time, writing:

It has been confirmed that the couple is expecting their second child together through surrogacy. The couple split in the summer of 2021, but Thompson consented to be a sperm donor for his ex — and they decided on a carrier — before his paternity scandal with Nichols became public in December 2021.

“Khloé and Tristan are not back together,” an exclusive source said when it was revealed that the exes are expecting their second child through a surrogate, adding that the former pair “have not spoken since December outside of parenting responsibilities.” “The baby was conceived via surrogate before it was known to Khloé and the public that Tristan was having a baby with someone else in December,” the source added.

According to a source, the now-exes are expecting a baby boy together, and they purposely chose to put a male embryo into their gestational carrier.

The Kardashian-Jenner clan was “supporting” as the actress awaited the birth of her second child via surrogate, but a source exclusively revealed that they “distanced themselves” from Thompson following his feud with Nichols.