Now, the world is getting its first ever Vegan Fashion Week right in Los Angeles. 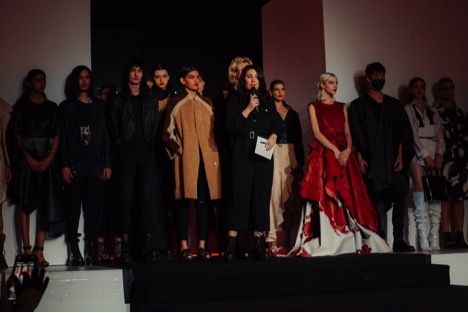 The event is said to be a tribute to animals, and an ode to the end of animal exploitation. As the city was recently named the largest U.S. city to ban the use of fur, it only makes sense for this special event to make its debut here.

The four-day event launched with a private opening party, held at the Natural History Museum before the official start of the show.  The event is supported by animal rights group PETA and non-profit organization Fashion Revolution.

Founder, Creative Director, and animal advocate, Emmanuelle Rienda, aims to encourage designers to be solution based by paying attention to how they develop their products and the way they source their fabric.

Initially a vegetarian, Rienda eventually transitioned to become a vegan and has had this project in development for more than a decade already.

“Our aim is to bring vegan avant-garde fashion to the city, an angle that has been dismissed until now. We want to empower vegan designers and show that cruelty-free is the new luxury and can be easily included in the high-fashion realm,” she said at Vegan Design Week. The goal is to fuse fashion with environmentally conscious activism by encouraging others to go cruelty-free in the fashion industry. 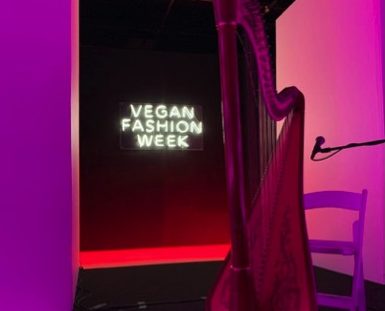 This year’s theme is “Facing Our Time,” which “explores the challenges we face around ecological and climate change through the lenses of science, nature, and art.” The event is a ticketed event, with prices ranging from $20 to $60 depending if you choose GA or VIP access.

Attendees were able to get a lot out of their experience; this included a fashion runway show, a talk by Nobel Prize-winning climate scientist Robert Lempert, and the chance to see “Vegan World” at the California Market Center — where vegan delicacies are sampled and animal-free products sold.

The fashion show featured designs from brands such as Dr. Martens, Chloé Trujillo, WastedLA, Enda, and more. Several celebrities who have also supported animal rights in the past were seen attending the event, including actor Harley Quinn Smith and musician Moby.

“It’s not about being vegan or not. It’s about what you’re doing right now to improve your label, and ‘how can we all evolve together?’” Rienda told Vogue. “Now is the time to create a Fashion Week that shows how being vegan today is not only about animals—it’s about being good to all beings on the planet, humans included. It’s not a matter of style anymore. It’s a matter of choice.”

The launch of this event comes just after several world-renowned luxury fashion houses have decided to go cruelty-free, from Chanel announcing their decision to stop using exotic animal skins and fur in their products to Gucci going fur-free.

The event concluded on February 4th with a private fund-raising event. According to Rienda, there are plans to hold a second series of the event, set to take place sometime in September in New York or Paris.

In looking at the future of Vegan Fashion Week, it doesn’t seem like Rienda plans to slow down any time soon. “Vegan Fashion Week is going to exist until every fashion house decides this is the norm,” she said. “There is no room for cruelty or for ways of doing fashion that is polluting this planet.”

VFW, serves as an inspiration to other designers by raising the level of awareness and reminding us of the ethical, social and environmental issues surrounding the use of animals in the industry.