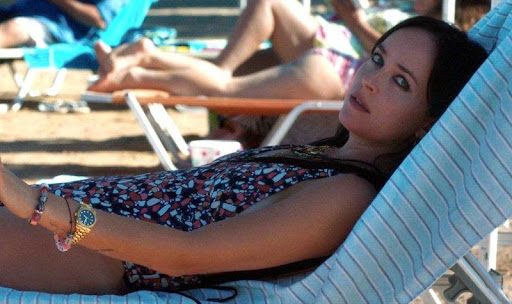 Maggie Gyllenhaal tackles motherhood, shame and the complexity of desire in her nuanced, powerful directorial debut based on Elena Ferrante’s novel.

‘I’m an unnatural mother,’ Leda, the main character of The Lost Daughter, says at some point in the film. Anyone who has ever read a novel by Ferrante shouldn’t find this surprising: the Italian author is famous for being candid in her exploration of the female rage, motherhood, desire and frustration. There is always a lot of self-repression in Ferrante’s female characters, of fascination with – as well as repulsion of –  the body, of jealousy and despair, of the fear of losing oneself. The Lost Daughter could have been a tricky novel to turn into a film, but Gyllenhaal delivers a striking one that succeeds in bringing to the light the complexity of the maternal experience.

Olivia Colman plays Leda, a middle-aged academic on a getaway in Greece. Away from her daughters, she seems to be looking for peace and quiet above all else, and yet as soon as she starts relaxing under the sun, a large and loud family from Queens invades the beach. Initially repulsed by the group, Leda quickly becomes obsessed with Nina – a beautiful young mother played by Dakota Johnson – and her daughter. Seeing the two together seems to unlock something in Leda, and when Nina’s daughter goes missing, Leda is the one who finds her. But then she does something creepy and unexpected: she steals the little girl’s doll, hides it in her room, and doesn’t give it back, not even when the whole family is desperately looking for it (Nina’s daughter doesn’t seem to sleep or find peace without it.)

Flashbacks of Leda’s own time as a struggling young mother follow. These start as fond memories of her two daughters, but then turn into distressing recollections of Leda’s attempts to negotiate motherhood and work, of her desperate fights with little Bianca, who keeps challenging her mother, and of her affair with a fellow professor (Peter Sarsgaard.) As these unnerving flashbacks merge with the main narrative, the core of the film seems to reveal itself: a shattering of the traditional expectations of motherhood and an exploration of the contrasting feelings of a woman who is ashamed of resenting her children, while also being terrified of losing herself in the domestic drama. In Ferrante’s book, Leda says,

‘All the hopes of youth seemed to have been destroyed, I seemed to be falling backward toward my mother, my grandmother, the chain of mute or angry women I came from.’ 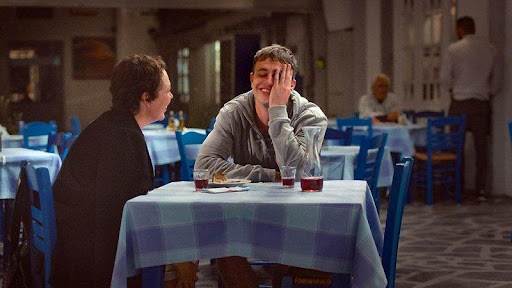 Olivia Colman and Paul Mescal in the film.

There are two ways in which Gyllenhaal manages to recreate Ferrante’s powerful words. The first is through Colman’s and Jesse Buckley’s performances. Colman is both warm and cold, moody and impulsive, her actions always unexpected. It is a difficult role but she plays it to perfection. Buckley is incredible as a young Leda, both echoing Colman’s performance, while also showing the struggles of a woman physically and emotionally exhausted by her children. Not much happens in the film, and yet every scene feels like a surprise thanks to the unpredictability of Leda’s character.

Gyllenhaal also shoots each scene in a sensual, unexpected way. From the way Leda looks at Nina’s body, to the details of rotten fruit and a worm coming out of the doll’s mouth – the film moves from beauty to ugliness, from love to resentment. Leda can’t seem to find peace within herself, and Gyllenhaal mirrors her uneasiness, without ever being judgemental. In the end the ‘unnatural mothers’ of the film are layered and believable human beings.