Why Public Shaming Was the Best Thing That Ever Happened To Me: The Story of #Gigglegate

When a little Canadian artist like me is offered to sing at the All Star baseball game in Miami, you say yes. Even though it’s possibly one of the most stressful, terrifying gigs you’ll ever play and you risk disgracing your country, you say yes. So I did. I couldn’t have been more excited and honoured to be there. I was practiced, experienced and ready for the most publicized gig of my life.

People are ruthless. I’ve dabbled in small amounts of fame before. Shows as a kid, runner up on a reality TV show in high school (please don’t google that) and now a few radio hits in Canada. I’ve always been very aware of the consequences of attention. The fear is real because of the ridicule I’ve faced before. From people telling me I was too fat for TV as a child to being on stage and hearing the front row talk about how drunk I must have been because of my dancing.. (nope. Just a very spirited dancer). I’ve heard it all. I’ve known for a long time that people are ruthless.

I sang my heart out. I sang from a place of deep gratitude and knowingness. I took it all in and I let myself go and the moment took over and ended faster than you could say #Gigglegate. I made my way back to my people and we did a happy dance, completely unaware of the media storm brewing back home. I was beaming. Numerous people were stopping me in the stadium saying how much they enjoyed my version. I thought I couldn’t have done any better. I had no idea how catastrophic my “mistake” was because I didn’t know I’d made one. I didn’t know the next day I’d be trending on Facebook because someone would splice together a fake video of a baseball players “reaction” to my “mistake” and call it the truth. I did know, however, that people can be ruthless, and I am thankful for that.

Twitter users (I won’t mention) were saying things like, and I quote, “You are a disgrace, hope you get run over buy a bus”, “You sounded like a retarded child. Drink bleach” and “Your passport should be revoked. Don’t ever sing again”. It hurt, but I was ok. It said more about them than me. I found myself more grateful than ever to be in my thirties. If this had happened even a year before I might not have have handled it so well. If I didn’t have all of my fans, friends and family defending me to the end I might have felt like I needed to defend myself. It was ok. Partly because I knew the truth and partly because I’m a little older and wiser and inching closer and closer to a world where random opinions don’t sting so much. I did sing again.. the very next day. And I sang my heart out then too. 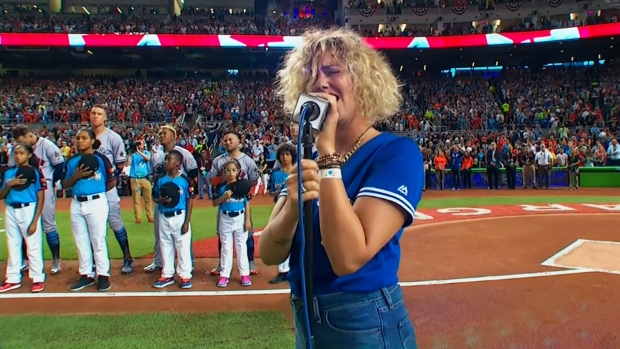 I giggled. Why? Because I was feeling SO proud to see other Canadians holding our flag on the jumbo tron, because I’m human and because I’m one of the most joyful mofo’s you’ll ever meet. I’ve been getting in trouble for laughing too much since my earliest memories. This has always left me wondering why seriousness seems to be associated with respect. If I was playing a remembrance day show of coarse I would have understood this level of scrutiny, but I was at a fun sporting event living my best life, celebrating my favourite country.  The irony that I was shamed for disrespecting it when my emotion came from a place of pride is funny, no? Too soon?! 🙂

I don’t live in the fear of fame anymore. It’s kinda like one of my favourite quotes by Theodore Roosevelt, “The credit belongs to the man who is actually in the arena, whose face is marred by dust and sweat and blood”. I chose to make music no matter what happens a long time ago. This experience showed me the depth of myself. Becoming who you are is messy and beautiful and painful but I can say with full faith now that sometimes the worst things that happen to you are actually the best.