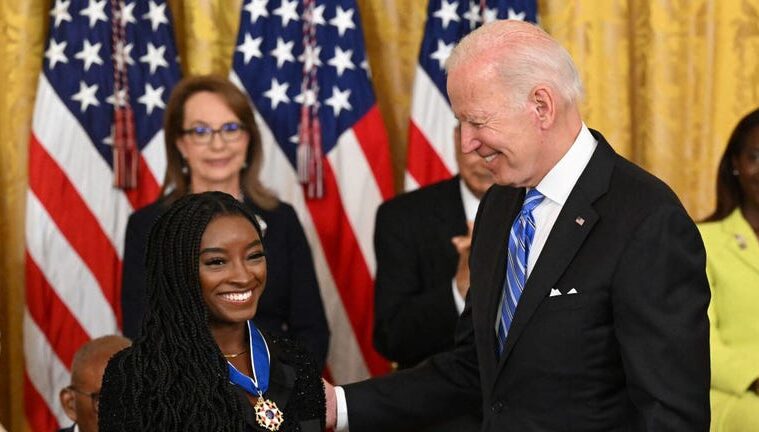 The Presidential Medal of Freedom Awards were presented to 17 recipients at the White House. 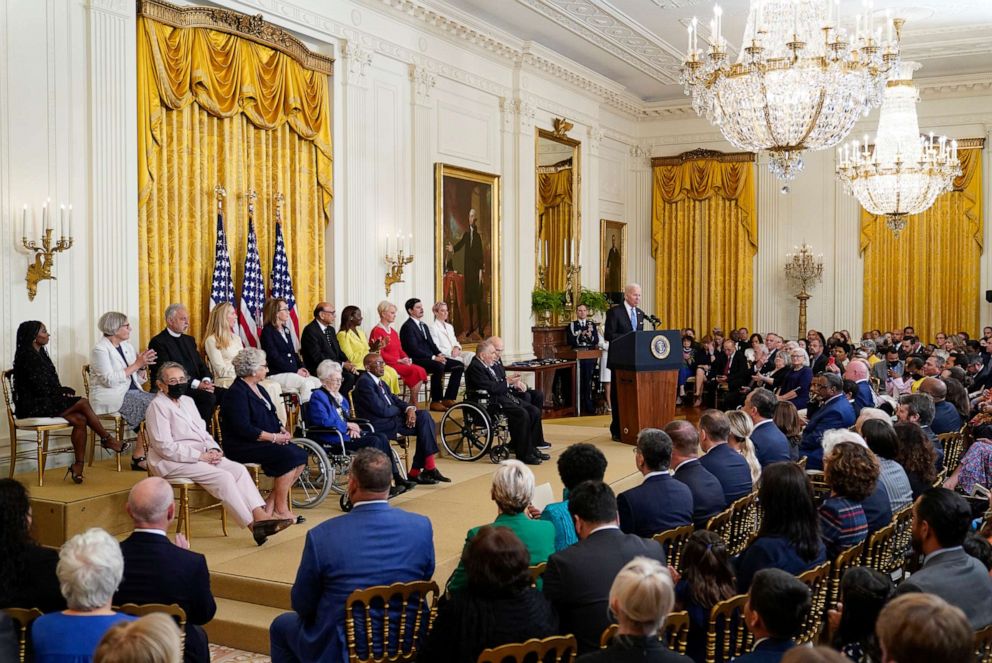 The Presidential Medal of Freedom Awards were bestowed by U.S. President Joe Biden on Wednesday to the 17 honorees for their extraordinary achievements in their respective fields. Vice-President Kamala Harris was also in attendance.

It is the highest civilian honor of acknowledgment in the United States. President Biden announced the names of the recipients a few days ago. The list includes politicians, civil rights activists, military vets, entertainers, athletes, and others. The ceremony took place in Washington, D.C. days after the country celebrated its Independence Day on the 4th of July.

Biden stated, that the chosen individuals have been given opportunities and have demonstrated extraordinary abilities, sometimes against all odds.

President Biden has long said “that America can be defined by one word – possibilities.

These seventeen Americans demonstrate the power of possibilities and embody the soul of the nation – hard work, perseverance, and faith…” 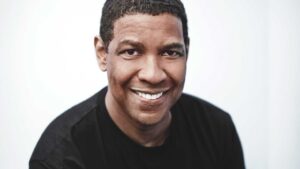 One of the recipients, actor and producer, Denzel Washington 67, was unable to attend the ceremony yesterday, due to testing positive for Covid. President Biden said he would present Washington with his award at a later date.

The President also spoke about the very acclaimed actor by saying “There’s a man who couldn’t be here today but wanted to be. Denzel Washington is one of the greatest actors in American history. Academy Awards, Golden Globes, Tony Awards, (and) wide acclaim from audiences and peers around the world,” the President said. “He couldn’t be here with us today, but I’ll be giving him this award at a later date when he’s able to get here.”

After the President’s introduction, the first Medal of Freedom award was presented to American Olympic gymnast star Simone Biles. At only 25, Biles is the most decorated gymnast in U.S. history and she has won 32 awards so far in her career. 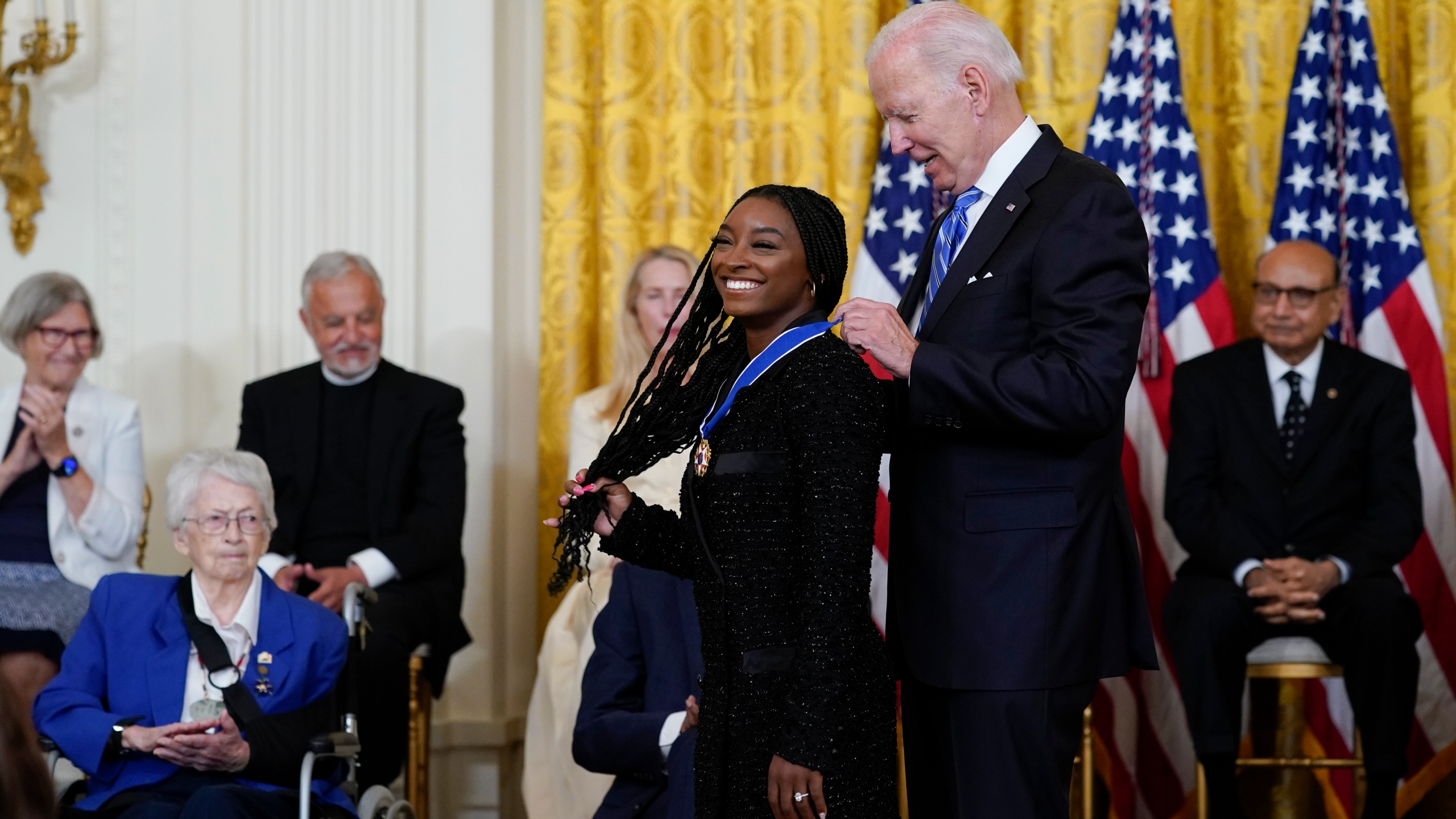 Biden said of Biles, “When we see her compete, we see unmatched, unmatched power and determination, grace and daring.” He continued, “a trailblazer and a role model when she stands on the podium, we see what she is — absolute courage to turn personal pain into a greater purpose. Today, she adds to her medal count of 32.” Biles made history by becoming the youngest person to receive the Medal of Freedom Award.

Along with her accomplishments, Biles is also recognized as a spokesperson for mental health after speaking out in 2020 at the Tokyo Olympic Games. She is a supporter of Foster Care Services and is an advocate for victims of sexual assault. 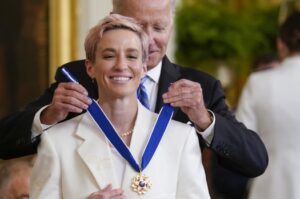 Olympic gold medalist, Megan Rapinoe 36, a member of the U.S. Women’s National Soccer team, was acknowledged for her advocacy for gender pay and LBGTQ+ rights. The Gold Medalist also showed support for her fellow athlete, WNBA star Brittney Griner by wearing a white suit with the embroidery ‘BG’ initials beside a flower on her jacket. Griner who is also making headlines around the world is currently being detained in Russia on drug-possession charges and is fighting for her return to the U.S. 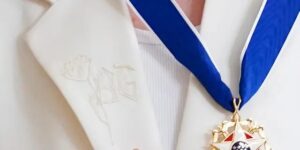 Some of the other recipients include nun, Sister Simone Campbell who hails from California and is a member of the Sisters of Social Services. Campbell 76 years old, has received numerous awards over the years. She advocates for social justice, economics, and immigration policies for marginalized people around the world.

Other notables include 92-year-old Brigadier General Wilma Vaught who joined the army services in the 1950s. General Vaught broke barriers, by becoming the first female officer in every area where she was deployed in. She retired from the military in 1985.

The Whitehouse determines those who were selected for the honors –

“as they have overcome significant obstacles to achieve impressive accomplishments in the arts and sciences, dedicated their lives to advocating for the most vulnerable among us, and acted with bravery to drive change in their communities, and across the world – while blazing trails for generations to come.” 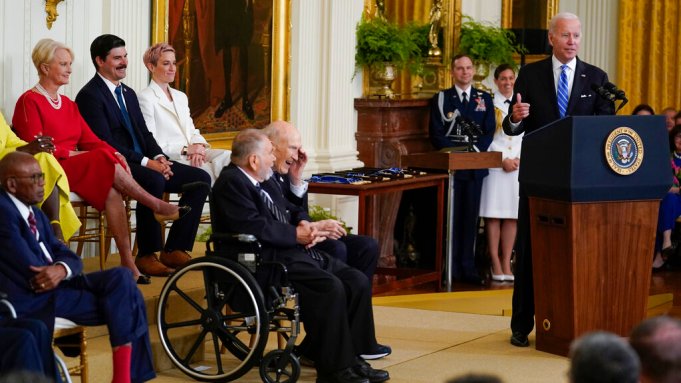 Diane Nash along with Fred Gray, a civil rights attorney are recognized for their unwavering determination for justice over the span of several decades. Gray, is famously known for defending Rosa Parks and working with Civil Rights Leader, Martin Luther King Jr. during the 1960s movement. Diane Nash is also commemorated for working with MLK Jr.

Three of the recipients who will be honored with the posthumous award are Steve Jobs (d. 2011) Apple co-founder and CEO, John McCain (d. 2018), Politician and Presidential candidate, and Richard Trumka (d. 2021), a Lawyer and Labor Leader.

During another official service, which was held on Tuesday at the White House, four Vietnam Veterans were decorated with Medals of Honors for heroism by the President.

President Joe Biden summed up the end of the day’s ceremonial honors with this statement “this is America.”

Joe Biden was bestowed with the honor back in 2017 when he was Vice-President.

Then-President Barack Obama surprised Biden with the acknowledgment and called him a “lion of American history.”