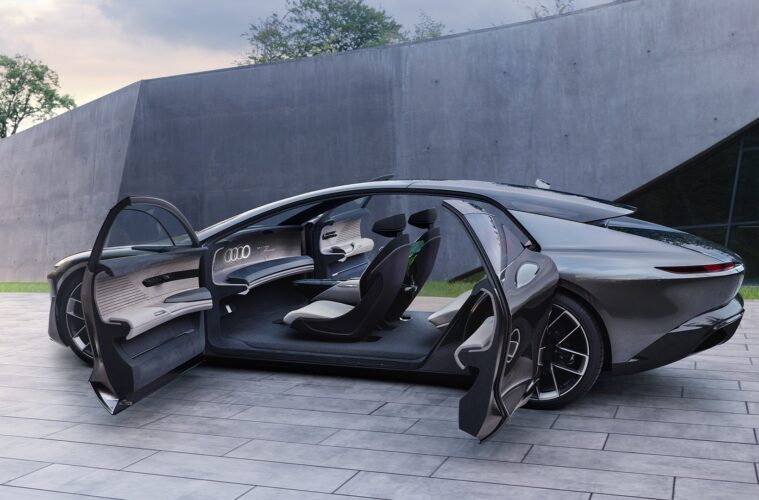 Audi Concept Car Grandsphere: The Car of the Future

The Audi concept car Grandsphere offered a glimpse into the future with its Canadian debut on October 12th-16th in Montreal.

This was the first time the groundbreaking car was physically on display in Canada. Attendees had the chance to take part in a one-hour immersive experience to get a true feel for the many steps Audi is taking to go electric. House of Progress by Audi exhibits the automakers vision for the future of premium mobility and has previously taken place in Tokyo, São Paolo and in Milan for Design Week. By 2025, the automaker aims to have a portfolio of more than 20 all-electric models that when charged with green electricity, emit zero carbon.

The Audi Grandsphere is the second in a series of concept cars providing a look at the future of first-class automative cars. The design evokes the sense of a private jet for the road with spacious interior and an experience that adapts to the needs of the passenger. It is a highly upgraded sedan model that has level 4 autonomous driving and offers the ultimate spacious ride with the ability to make the steering wheel and pedals disappear.

When speaking on the vision behind Grandsphere, Audi Designer Jason Battersby said, “we as a team wanted to show how autonomous technology will change the way you experience a vehicles interior space. That technology inspired us and allowed us the creative freedom to envision first-class style travel in the front seats as opposed to the traditional rear seat layout. With our focus on creating the interior volume first we designed the vehicle from the inside out, which demonstrates a very progressive shift in both interior and exterior design. It’s exciting to know this technology can have a massive impact on the way we use our vehicles, and is definitely a designers dream to showcase it in such an elegant form.”

With minimalism at the core of its design, Grandsphere features clear lines and the use of high-quality materials from sustainable sources to create a timeless aesthetic. On the outside, the team had a fresh interpretation of the Audi single frame with fluid lines forming a hexagonal shape.

Speaking on which elements were important for the Audi team to incorporate into the design, Jason Battersby added, “a car’s exterior is the first thing you see, so it has to create an impact and excite you, and draw you in to that beautiful interior. It was important from the beginning to have very low and sleek proportions, classic GT traits but with a modern touch. The cabin is quite large due to the importance of the interior space, so we paid a lot of attention to balance all of the key design lines and volumes to make the cabin feel harmonious with the body. The front of the Grandsphere carries a revised Audi single-frame, communicating the Audi brand but with a very modern treatment. Overall we as a team aimed to reduce the amount of lines on the body, adapting a less is more approach, and we were lucky enough to incorporate all of the elements that just felt right during the process.”

Grandsphere offers a fully personalized experience for drivers, from welcoming passengers with a custom playlist to allowing passengers to use the car for whatever their heart desires: communication or relaxation, work or retreat.

The Future of Electric Vehicles

With more automakers moving towards an electric initiative we spoke with the Founder and President of Electric Autonomy, Nino Di Cara about how this movement could impact the planet. “Transportation accounts for around 1/5th of global CO2, emissions and road transport is about 3/4 of that. In Canada 80% of our electricity grid is powered by non-emitting sources – and there are plans to increase this to 90% by 2030. So, swapping combustion vehicles to electric will have an enormously positive impact on the climate crisis. But, EVs also bring other significant advantages beyond reducing CO2 emissions that are often overlooked – much less noise for passengers inside the car as well as people near by making for a calmer environment overall. Also, EVs have zero toxic tailpipe pollution which has been proven to cause asthma and Alzheimer’s – when I drop my son off at school it makes no sense to see SUVs with their engines running right at the school gates when smoking in front of them has been banned. EVs also require much less maintenance and have lower operating costs than combustion vehicles, so car ownership will actually become cheaper.”

The Audi Grandsphere is a proof of concept car and elements of it will be incorporated into future electric Audi cars. If this is any indication to where the future of auto-making is heading, the future is looking bright.