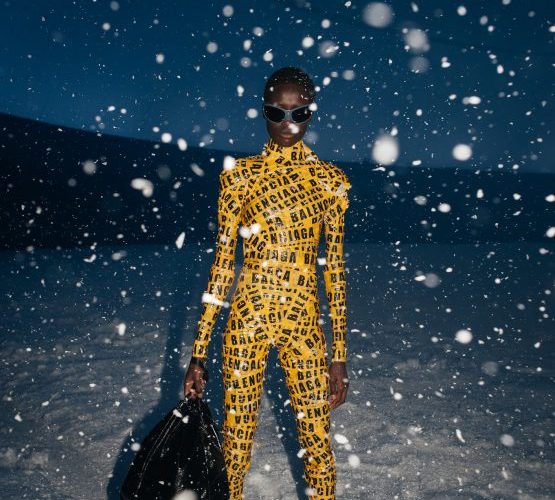 Balenciaga shows support for Ukraine with its Winter 2022 Collection.

“I decided that I can no longer sacrifice parts of me to that senseless, heartless war of ego,” wrote creative director Denma on a note left on audiences chairs at the Winter 2022 collection that premiered March 6th in Paris.

Amidst the escalating Russian attack on Ukraine, the Parisian brand used their outlet to display their solidarity with all those affected by the war. Despite the severe inspiration for the show, there was no lack of transparent fashion ingenuity, with an added critique on the exuberance of the fashion industry. Invitations for the collection were engraved on the back of cracked iPhones from years past and sent wrapped in Balenciaga-branded Apple packaging. Upon entering the venue, guests were greeted by the aforementioned collection note as well as a blue and yellow t-shirt placed upon their seats. As is typically the case with Denma’s work, there was no separation between the collection and setting. A wind-producing 360-degree transparent dome filled with artificial snow was used in lieu of a basic runway. Once the lights were dimmed the show began while a composition by the French pianist David Kadouch rang through the speakers. 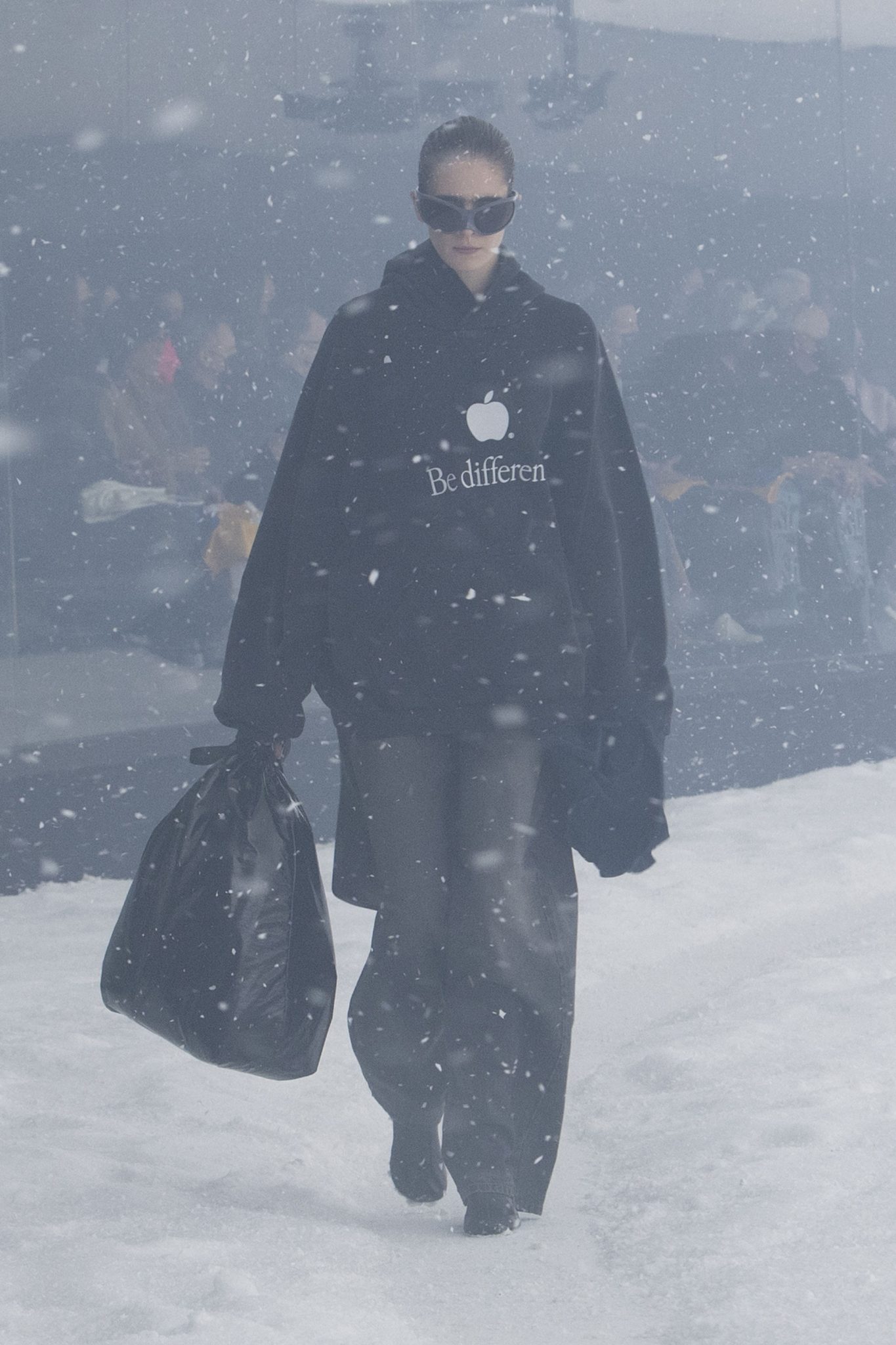 Ultimately, art imitates life. An outlet such a fashion conjures its substance by presenting an analysis on the current status quo; wherever a niche presents an impactful opportunity for commentary. This is why art, and by extension fashion, has and always will provide a voice for those who are helpless. A universal language that can never be censored. Though at a time when so many innocent people are suffering, that connection between creation and essence becomes cloudy when the medium is valued at a price point only accessible for an upscale demographic. Nobody understands the absurdity of a gourmand display such as Paris fashion week during this time better than Denma; hailing from the ex-soviet union nation of Georgia that was torn apart by conflict during the 90s. Along with this personal experience of being a refugee, Denma is aware that a person in his position is uniquely able to inspire change. Even Kim K wrapped in Balenciaga cation tape could not distract the audience from the serious undertones of the show. 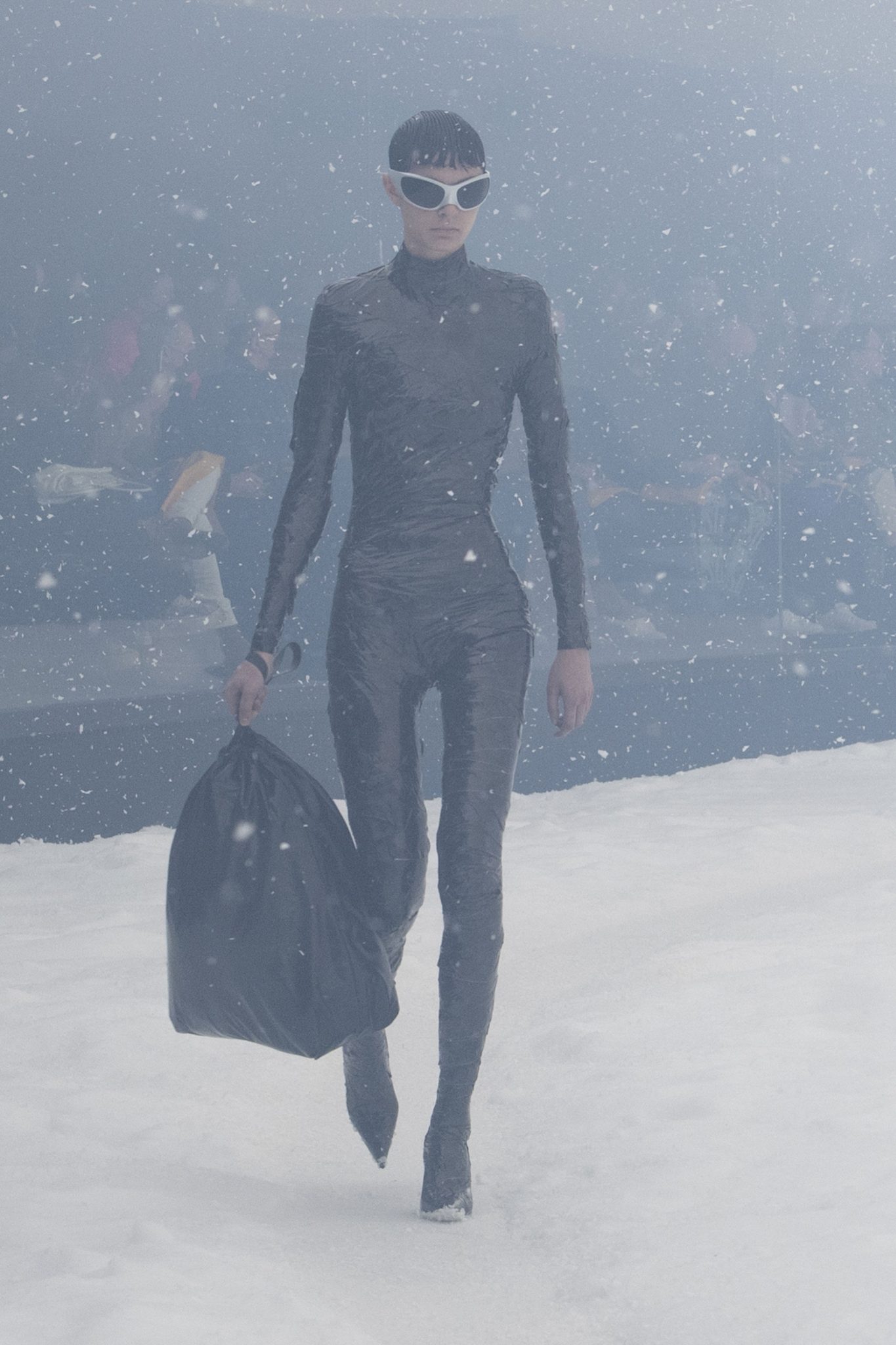 Models trudged through the snow and wind wearing aughts-inspired sunglasses, knee-high leather heels, and clutching designer handbags that were a copy-paste of common kitchens waste bags without so much as a cower. There was an absence of colour throughout the entire collection, besides a few all-over retirement home floral patterns. The typical Balenciaga archetype of oversized silhouette was demonstrated on overcoats, as well as a few basic hoodies that advertised functional Balenciaga logos and scripts such as a bite-less apple logo. As the show continued the music transitioned into high bpm electronic music that complimented the increasing wind and snow. An absence of fasteners was consistent in the collection; with most of the gowns and dresses looking like they could be thrown on over the shoulders. The textiles of the collection varied from the beloved black leather is seen most notably on Ye and his past-flame Julia Fox, to blue denim jeans doubling for a top and bottom. For the swan song of the show, the two final models walked out in a yellow tracksuit and a blue gown with a long tail. Denma chose not to do a final designer bow, instead of letting the collection speak for itself.

It’s perhaps absurd to believe that a creative director as proficient as Denma, no matter how distraught, would fail to embrace an opportunity to apply his obsession for fashion where available. It’s been clear as day ever since the designers’ antagonist works with Vetements; Denma’s objective has always been to keep challenging what fashion is capable of. His cohesive Winter 2022 collection exists within that space of pushing for change without being blatantly obvious about it. Genuine change cannot be raised through fashion alone, but as Denma sums up in his letter to not try at all would be giving in to the evils that be. Balenciaga is not alone in showing support with the war-torn nation, plenty of other luxury brands are doing their part in proving aid. If you’re looking for ways you can help, check out this article for a list of foundations to support.

For more news like this, head over to HOLR’s feature highlighting Ukrainian artists responding to the war.