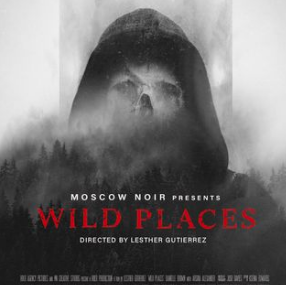 On November 19th rockband Moscow Noir takes over the HOLR instagram! There they will be sharing aspects of their daily lives, taking questions about their music, talking about their new video, and announce an exciting new contest you won’t want to miss!

Tell us about Wild Places!

A girl gets kidnapped in the depth of the woods, and it’s basically showing this thriller journey of her being chased by a relentless killer, an entity that isn’t so human. You don’t see the face, it’s like a phantom basically. We wanted to add a little animation into the film to show this sort of dream like sequence that explains a bit of the heroine in the story, in a psychedelic kind of way. I pictured it as a dreamlike psychedelic horror ride. As for the message; whether its personal emerge or physical (in the sense of what I said about the heroine being chased by an entity) is based around the idea of “What you’re actually seeing”, and the whole goal of it is to overcome a personal beliefs/fear. With the song lyrics in Wild Places “see these wild wild faces” –  about the faces that we dream of and are afraid of, these faces we come across in our lives open our eyes, our minds, our hearts, and even our will to survive and over coming any obstacles that comes our way, because by doing so you become like the Wild Faces in the Wild Places. That’s the idea behind it.

Did you have the music video in mind when writing the song?

I knew in the beginning I always had this idea of an Alice In Wonderland concept but a rehash of that.  I knew It was supposed to be about someones personal journey – and then she would lead the entity through the journey in a similar fashion, still a psychedelic journey, but instead it was going to be in the city. With COVID hitting it changed everything; you couldn’t have certain people on set, budgets got affected, and everything got postponed. That worked in our favour because I love the concept of that psychedelic horror vibe but in nature, it’s such a nice contrast. Especially working with it being a rock song, it’s a more organic and natural way to explain the narrative. Even the animated sequence: instead of it being animated with the city as the back drop, animation came through being in nature/ the woods, and I think it added a very nice full circle aspect to everything.

How did you know it was the right time to share Wild Places?

It’s kind of funny because a lot of things happened weirdly because of COVID. You can’t anymore set certain dates because things happen and you have to change certain things, it got a little bit delayed but everything worked out because of the nature & woods and horror vibe to it, and by the time we wrapped that up and production was coming to a close, it was nearing the fall – and it made sense because, the woods and the forest with halloween coming up. So we held onto it being released on halloween because it hit the whole vibe perfectly, and it organically led that way. So I think it was an organic thing that hit us all, and showed that “this is the right time”, a lot of factors came along with it.

What are you hoping people take away from this?

So far responses and reviews have been really nice. By everybody who has seen it, close friends of mine and even strangers that have sent emails and messages, have all been saying that they are sharing it, and that they found it a really cool video. I even had people ask me about the animation sequence. A lot of interactions with people that I didn’t even know know about it. I hope that continues and reaches a lot of eyes and people because I think the message is very transcendent and universal, and applicable to everyone of all ages and all places.

Taking over the HOLR instagram story feeds. I’m excited to talk about certain projects on the way and any questions I can help with in regards to music video, the music itself, and other upcoming projects. We’ll also be discussing a cool contest we have coming up, where we’re giving away one of my original paintings via Instagram. Excited to share more details about that on the takeover.

Can we expect anything new coming soon?/what are you currently working on?

We’ll be releasing 2 songs, currently on their way. One will be a free download because its a more experimental music piece, still complimentary to the other album coming.  The second song is a side kind of a thing,  something I worked on over the summer, a very personal song and message.

Our next single off the album coming up too, and those dates will be released soon.