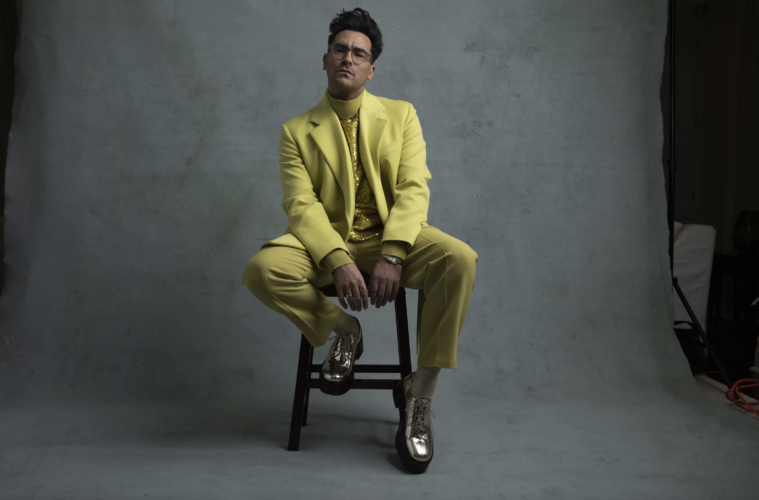 Being both the star and co-creator of Schitt’s Creek, Dan Levy is hilarious, talented, and incredible at making a statement. He excels as a writer and actor, however his sense of style is sometimes overlooked! Let’s take a look back at some of our favourite looks from Levy. 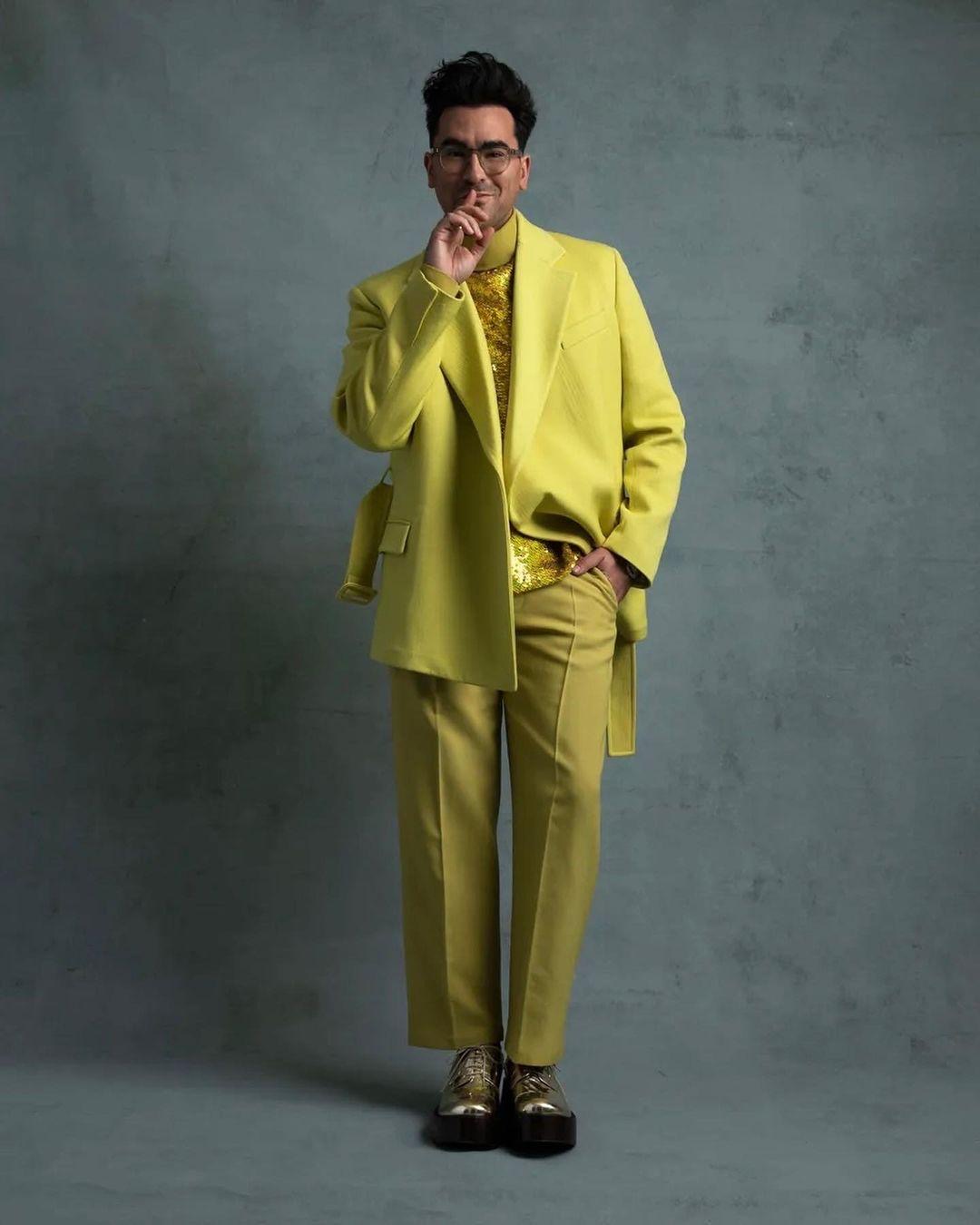 Levy recently starred alongside Kristen Stewart in 2020’s Happiest Season, but he’s most known for his hit show Schitt’s Creek which made him a four time Emmy winner.

Last month, he spoke to People about a potential movie reboot. He says, “My hope is that one day we can all get together. I see these people all the time. We’re in constant contact with each other. So the love is there. The desire to work together is there, and the desire to tell more stories is there.”

He adds, “I think when you have an audience that’s paid attention to you for 80 episodes of a television show, the last thing you want is to put something out that makes them think this feels like a cash grab. That’s not what we’re about. So TBD, but a TBD with an exclamation mark on the end.” 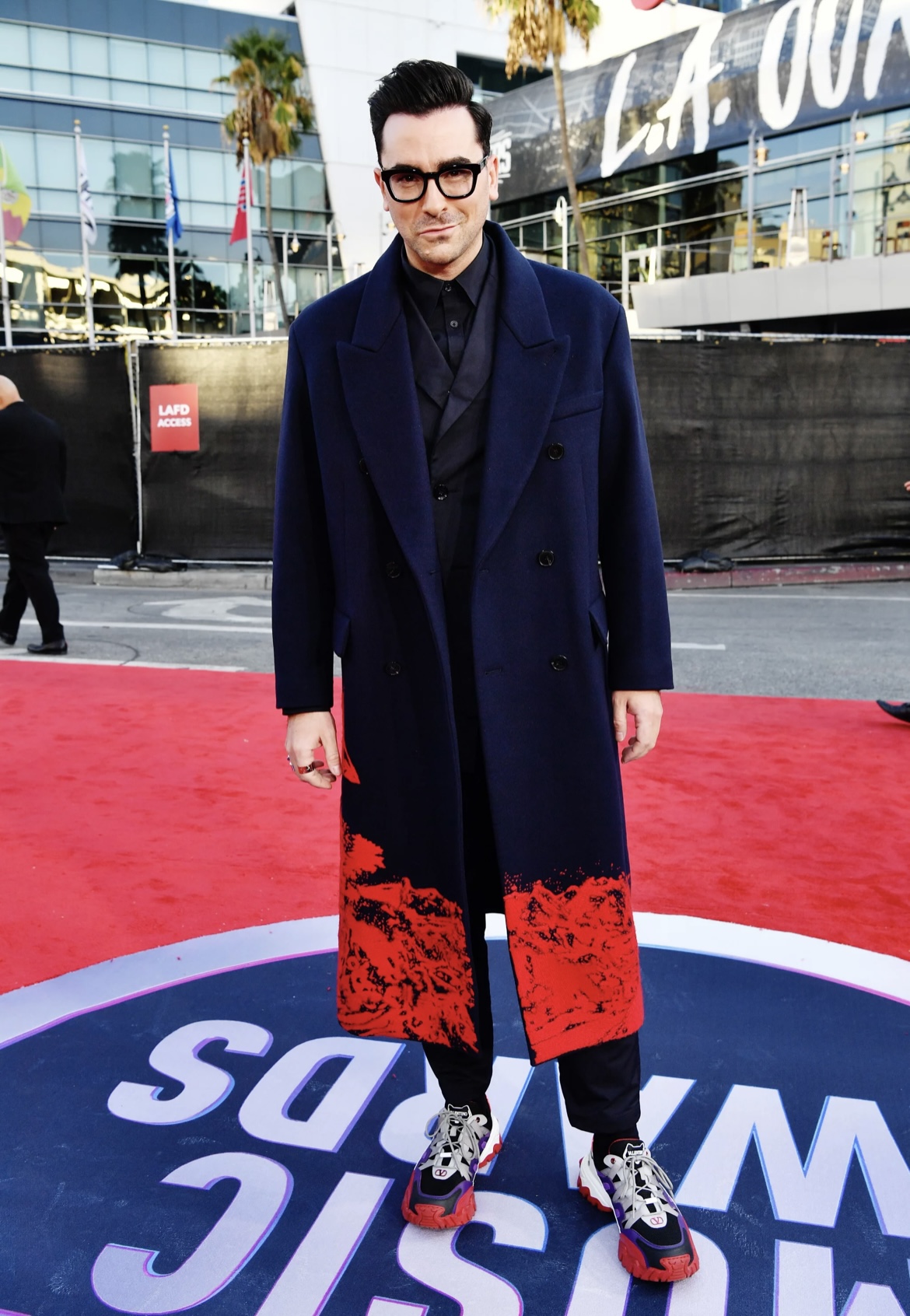 He arrived to the AMAs in a navy and red-embroidered Valentino trench coat. His chunky sneakers even have the same colours that are on his coat and it’s no secret that he loves a matching set! Underneath, he’s wearing a double-breasted suit by Valentino. This entire outfit draws inspiration from Valentino’s Undercover collaboration from Fall of 2019. 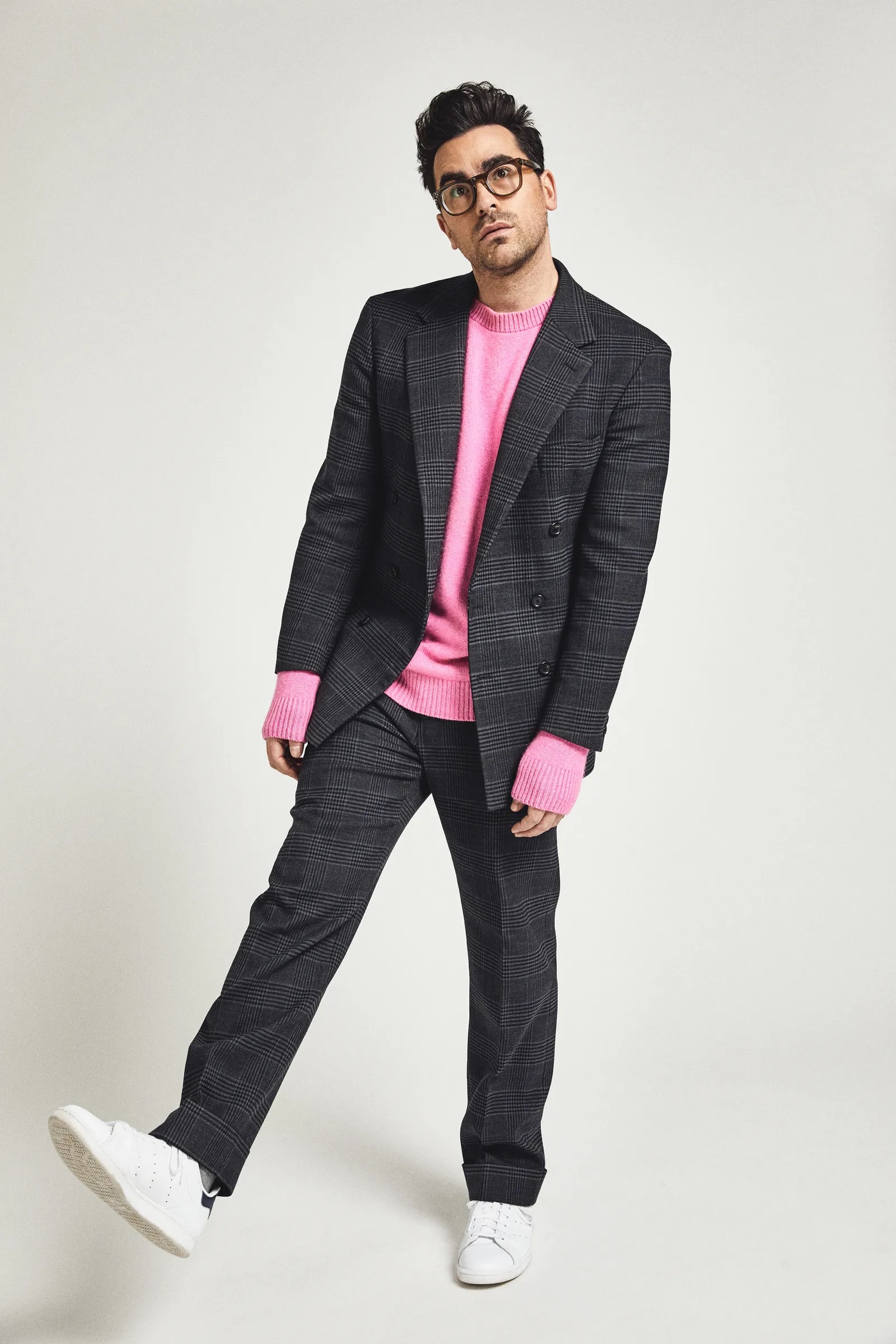 The combination of the pink fuzzy sweater and oversized, dark-grey suit is truly such a look. The photo comes from a shoot by GQ for a feature highlighting the star. We chose this outfit because it reminds us of an early 2000’s rock star attending a red carpet event with a much needed splash of femininity. Click here to read “how Schitt’s Creek creator Dan Levy made a family of rich misfits lovable.”

At the 2020 Vanity Fair Oscar Afterparty 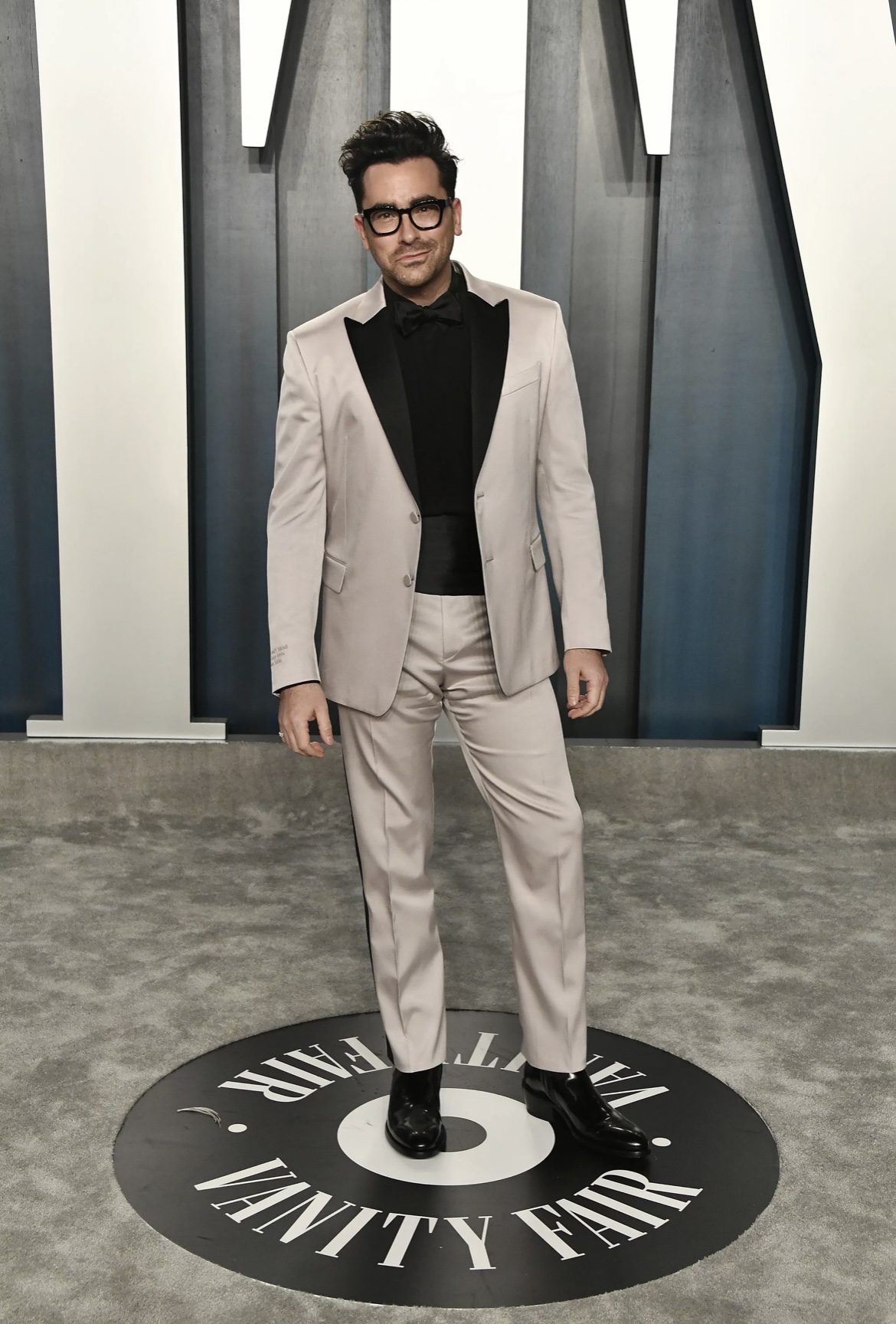 Levy looks dashing at the 2020 Vanity Fair Oscar party in a pearl coloured suit. His Valentino tuxedo is from the Fall 2020 collection and is paired with shiny black boots. 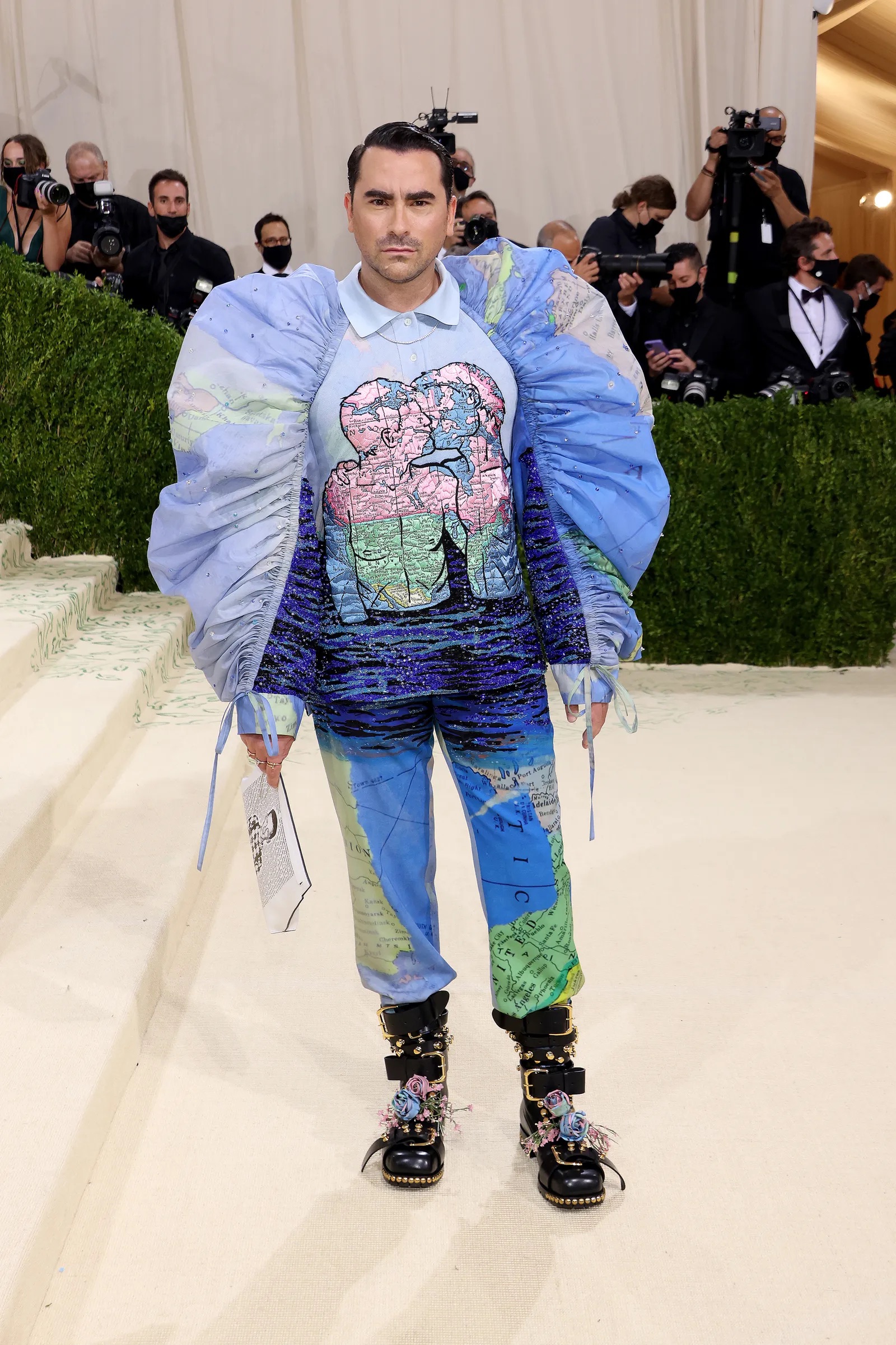 A star’s first Met gala is a huge deal. Levy had the privilege of collaborating with Loewe’s Jonathan Anderson to assist in creating his custom red-carpet outfit. It is said to represent “the resilience, love, and joy” of the LGBTQ+ community. He’s literally wearing art!