Kim Kardashian made her debut at the Saturday Night Live show and it was just too good! With themes ranging from the O.J. Simpson case to her family’s plastic surgeries, touching her sex tape, and recent divorce from Kanye West, Kim’s charisma enchanted the audience. Check this out!

Last Saturday, on October 9th, live from the NBC Studio 8H at the Rockefeller Center in New York, Kim Kardashian West made her debut on the late-night comedy show Saturday Night Live and it was just hilarious! The 78 Emmy Awards-winner show currently airs its 47th season, always topped with big surprises and great performances that ensure belly-aching laughs. Kim’s participation couldn’t be different: discussing pretty controversial and polemic topics, she made the audience feel a mix of shock, excitement, and fun. 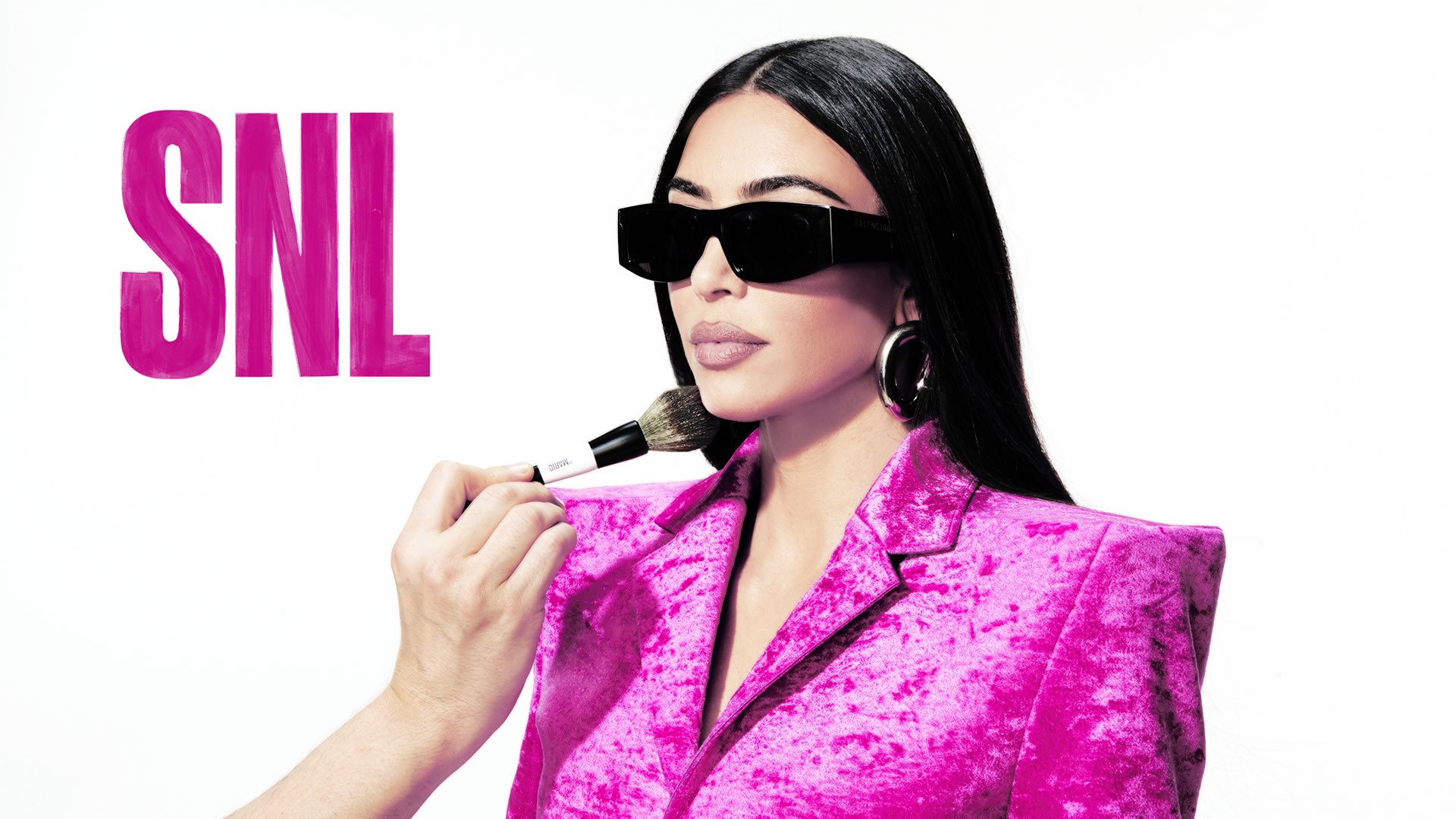 Beginning the monologue, Kim made jokes about her personal life, including the infamous sex tape with her then-boyfriend Ray J. She started by saying she was surprised to have been picked for the show considering she didn’t have a movie premiere in a long time and that, about that one movie, “no one told [her] it was even premiering”. She also made fun of her mother’s involvement with the video leak in 2007 and insinuated that momma Kris’ boyfriend Corey Gamble knows what it is to be a gold digger. Kardashian then talked about how happy she was to show everybody that she is much more than just a pretty face, adding that she also has amazing hair, nice makeup, and great curves, the ones her sisters use as reference when getting plastic surgery. 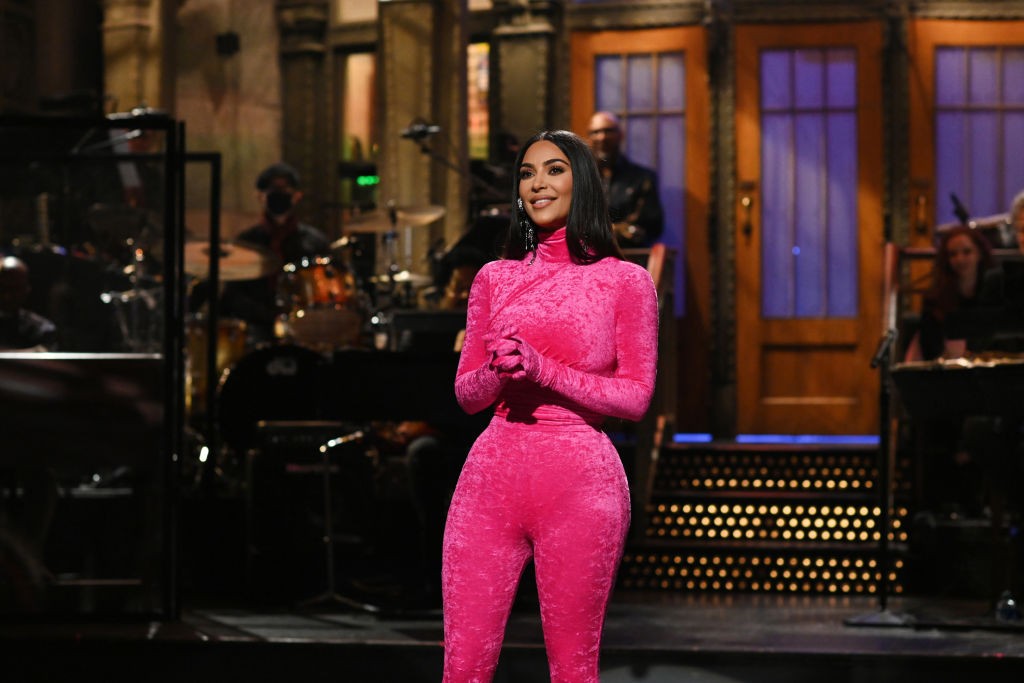 Following up, the KKW Beauty and Skims owner talked about her passion for getting wrongly accused people out of jail, cueing her father’s participation in the O.J. Simpson legal case and its mediatic repercussions. She said her father, Robert Kardashian, was the one who introduced Kim to the first black person she ever met, and she mentioned that she remembers that because “O.J. does live a mark. Or several. Or none at all, [she] still [doesn’t] know”.

Moreover, Kim talked about people in her family being named with K, then joking about how her mother knew well enough not to pick the name Karen but how she did not see Caitlyn coming. Kim pretended to be announcing her run for President of the US but said her family cannot have three failed politicians in it, mocking both ex-husband Kanye West and Caitlyn Jenner’s political attempts. Kim also referred to Kanye as “a talented legit genius who gave [her] four incredible kids”, and joked the reason behind her divorce “came down to just one thing: his personality”. Closing up her incredibly funny monologue, KKW described her participation in the show as “a chill, intimate night”, since SNL has an average of 10 million spectators and she is used to having 360 million followers watching her everyday life. 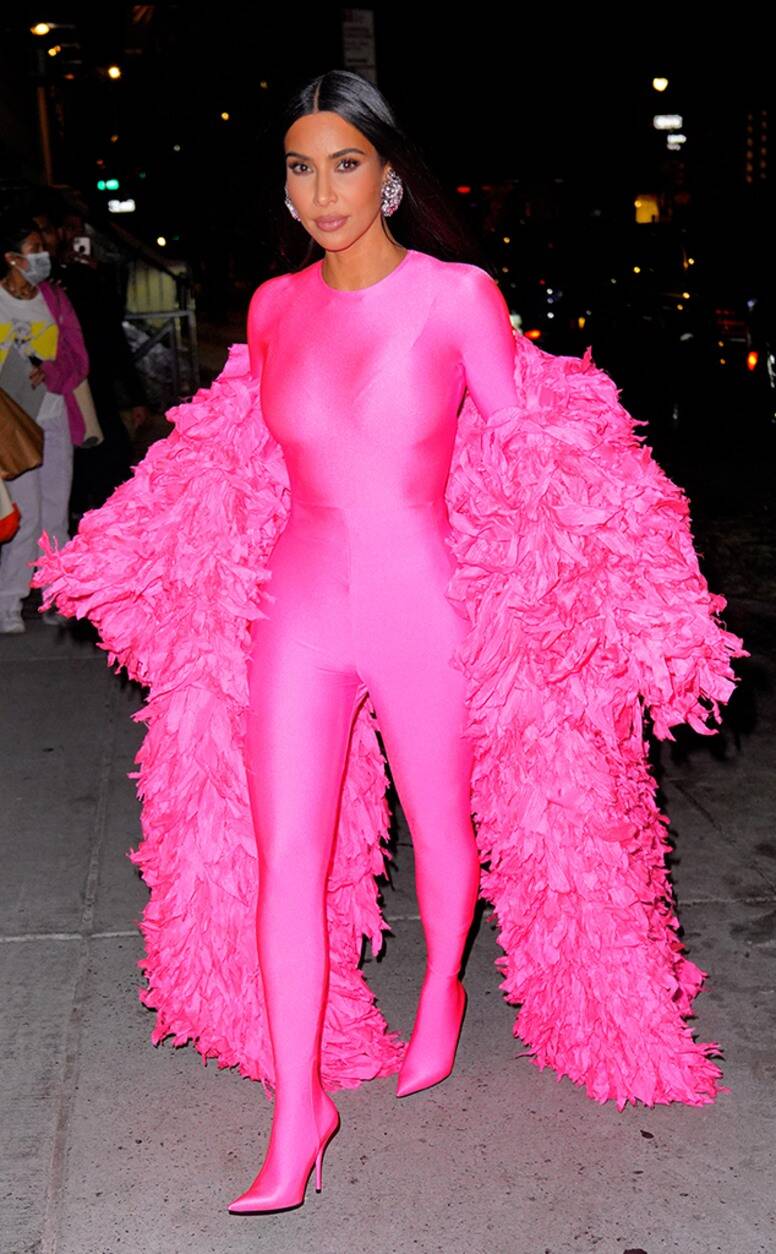 For the special night, Kim K picked a sequel of Balenciaga outfits, reinforcing her family’s long-time history with the label and her partnership with Demna Gvasalia, the Creative Director behind the hit Spanish Maison. Arriving at the studio, Kim showed up in a long, pink coat paired with pink gloves, glittery boots and handbag, oversized sunglasses, and a pair of statement earrings. For her monologue, KKW wore a pink wet velvet turtleneck jumpsuit, with matching gloves and boots. In the videos promoting the episode, the fashion and beauty entrepreneur appeared in a similar crushed velvet turtleneck, pants, gloves, and boots, but this time in black. For the SNL afterparty, Kim was dressed in a custom Balenciaga look, featuring a bright pink spandex bodysuit with the brand’s signature “pantashoes” and a floor-length feather boas coat in the same colour. It was such a fashion blast!