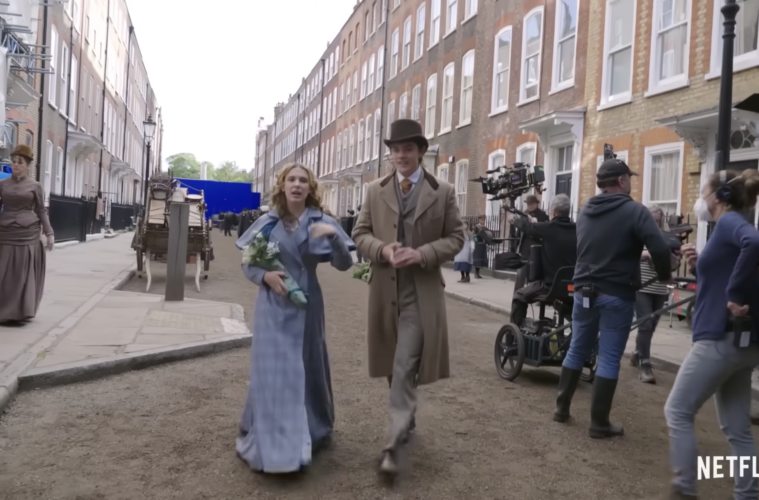 Millie Bobby Brown Called Out For Behaviour In Enola Holmes 2

Stranger Things actress, Millie Bobby Brown, is being called out by intimacy coordinator, Jessica Steinrock, for her behavior on set during scenes from Enola Holmes 2.

Millie Bobby Brown is in hot water after talking about “kissing” and “punching” her co-star during scenes in the latest installment of the Enola Holmes franchise series.

Brown took to Netflix’s TikTok page to discuss a moment in the series where her character and Lord Tewkesbury (Louis Patridge) kiss.

“Right on the rehearsal I grabbed his face and kissed him and he was like…” Brown said in the video. She then went on to make a shocked face, mimicking that of her co-star. Furthermore, Brown stated, “It was so cute really seeing her [Enola] take the lead.”

Brown also admitted to punching her co-star. “Because Louis is a good friend I just kept punching him, I wasn’t doing stunts, I really was hurting him,” said Brown. “By the end of it, he said: ‘Millie can you just fake punch me,’ I was fully just getting him right in the stomach.”

Intimacy coordinator, Jessica Steinrock, took to her own TikTok platform to comment on Brown’s actions.

“Ooh no, I love Millie Bobby Brown but this is not the cute story you think it is,“ stated Steinrock. ”I’m sure she and her scene partner have a lot of rapport built up and a great amount of trust, but we should never be surprising anyone during a fight or intimate scene ever. At the end of the day, this basically means she didn’t ask consent to kiss him. And when your scene partner reacts in surprise after you’ve kissed them that means the communication didn’t happen the way it really needs to.”

Steinrock later went on to say, “Little things like this can escalate over time, and frankly she has more power in that situation than he does because she’s a really well-known star. When we do spicy scenes, we love keeping light, having fun, but consent is mandatory.”

Steinrock finished with, “For the record, I loved Enola Holmes 2, but next time we have to ask consent.”

Brown has not addressed these concerns as of yet.