6 TV Series To Currently Steal Your Style From

Television has had a menswear problem since Miami Vice. The shows themselves may be superior, but no one who ever based their look on Tony Soprano or Walter White could ever really be called stylish. However, that’s all changing. Spring 2019 is bursting with series that may well challenge Mad Men in the style stakes. Here are 6 of the best shows to steal wardrobe tips from.

Based on Terry Pratchett and Neil Gaiman’s novel, Amazon’s new fantasy adaptation is the perfect intersection of nerd culture and quirky cool.  Michael Sheen and David Tennant are an angel and a demon forced to team up to stop the apocalypse. Come for Sheen’s positively celestial lesson in how to wear a white suit and look dapper rather than cheap, and stay for Tennant’s easy-to-recreate relaxed rock star aesthetic – black shirt, jeans, skinny scarf, shades.Plus, Jon Hamm (Don Draper himself) also stars in the show, underlining the show’s style pedigree.

The Chilling Adventures of Sabrina

Too easily dismissed as teenybopper fare, Netflix’s reboot of the comic book classic is actually super dark and spooky. It’s combination of retro-aesthetic and modern setting make it perfect inspiration for anyone who loves vintage, but still wants to dress relevant for 2019. The admittedly drippy love interest Harvey has superb jacket game – corduroy and denim numbers that are distinctive but easy to wear, and Sabrina’s warlock cousin Ambrose is quite literally a wizard when it comes to layering –so look at his expert balance of long jackets over knits, tees and vests and take notes. What We Do In The Shadows

Given it’s the story of 3 ancient vampires rooming together in modern Staten Island, you’re best off not taking style tips too literally here. But there are still lessons to be learned. Originally a film from Kiwi comedy geniuses Taika Waititi and Jemaine Clement, for TV Kayvan Novak and Matt Berry take over as the darkly dapper, flamboyant bloodsuckers. See how they punctuate their sober ensembles with a silk cravat or an extravagantly buckled belt. It’s all in the details. And the capes. You’ll definitely want a cape.

The Good Wife’s more politically charged spin-off is famous its strong language, stronger disapproval of the Trump administration, and strongest workwear game. Gentlemen looking for office wardrobe inspiration that packs a punch need look no further than Adrian Boseman (Delroy Lindo). Boseman is a stealth peacock, sticking to grey or navy tailoring then adding flourishes like a purple patterned tie with a contrasting pocket-square, double-breasting on his jacket, or a strong pin-stripe. He also knows the power of a signature piece – in his case a diamond earring.

As if you needed an excuse to re-watch Donald Glover’s award-winning comedy about the Atlanta rap scene. Arguably television’s coolest show, it’s not surprising that there’s many a Reddit thread dedicated to what Atlanta’s characters wear. Specifically, Lakeith Stanfield’s Darius, who’s frequently hailed as a fashion icon. Why? He’s one of those guys whose awesome outfit always looks like he just pulled it off his bedroom floor. Think formal joggers with a blazer and a beanie – a perfect blend of formal and casual, unexpected pairings that seem effortless but take great sartorial skill. 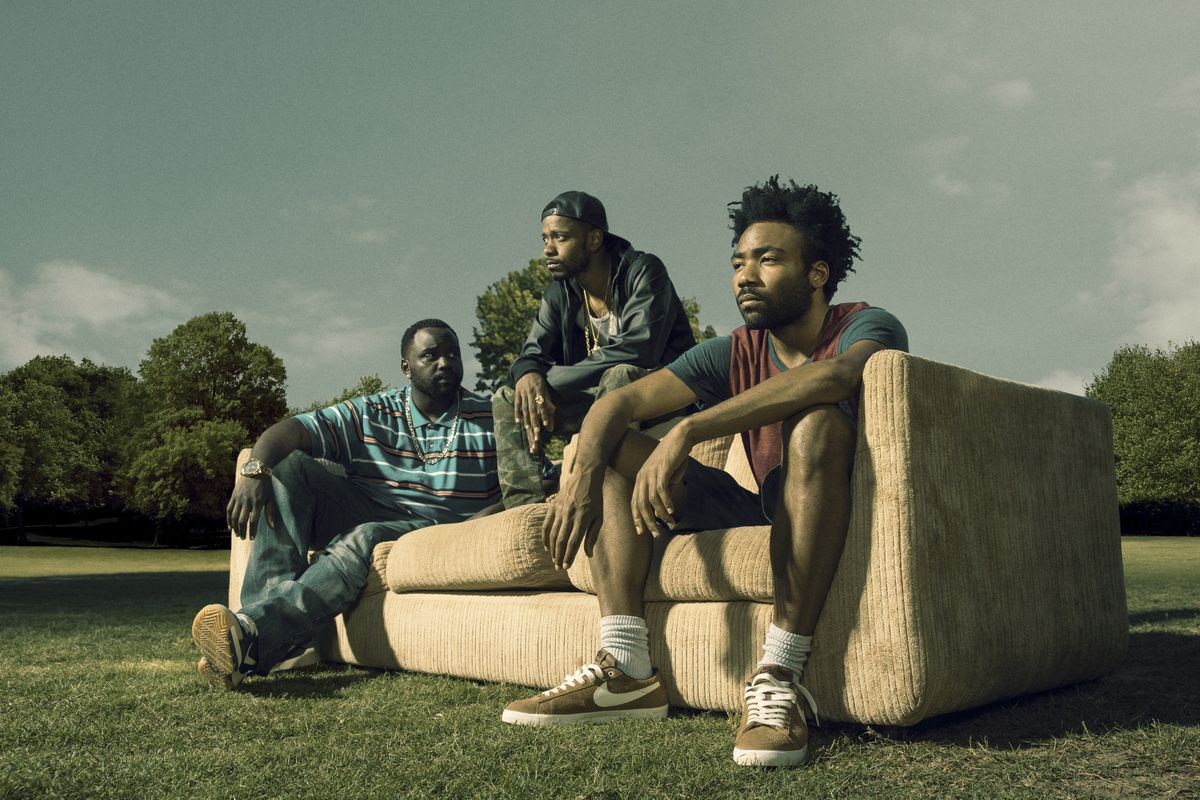