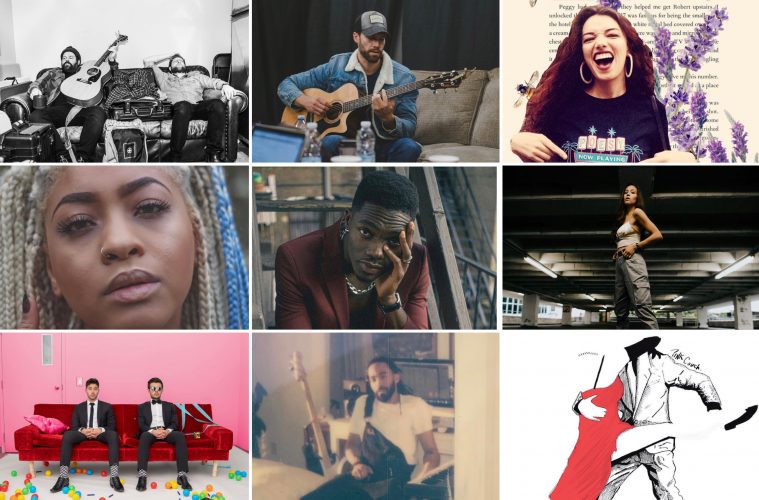 Underrated Canadian Artists You Need To Add To Your Quarantine Playlist

Music for many has long been an outlet for dealing with stress. This coping mechanism has an emotional allure that allows us to evoke certain feelings dependent on the tunes we choose.

This form of self-care allows us to escape our realities and get lost in the music without much conscious thought.

I don’t know about you, but I’ve had an abundance of time to listen to new music and appreciate some new artists.

Here’s a roundup of Canadian musicians and their songs [no, not the Shawn Mendes, Drake, The Weeknd or Justin Bieber top 40 type, but those up-and-comers you may not have heard of yet] that you need to add to your quarantine playlists.

This mystery man, J. Hutton, has recently dropped some hot new music. It’s got soul, it’s got passion, it’s got creativity. The velvety-ness to his manic, gemini man voice transforms from high to low, from sweet to sexy, and back again, demonstrating his incredible vocal range.

Also, he does all his own artwork. Am I impressed? Undoubtedly.

This soulful singer-songwriter has a rich and poetic sound. ‘Play the Fool’ is a R&B track with an ode to country. Starting and ending with an acoustic guitar, Terrell’s soft but husky voice is also accompanied by a trumpet and bass. The lyrics explore a “not-so-sweet taste of love” that will put you in your feelings.

Truth be told, I’d be happy to put this on repeat and drive backroads in the country for hours.

You may have seen these two on TikTok and already jammed out to their track ‘Ooh!’; but if you haven’t heard of them, this pop duo is coming in strong with tracks that will make you want to get on your feet and dance… or buy a red couch to dance on in the middle of the street. If you know, you know.

Crash, the singer, and Adams, the guitarist, have been friends since childhood and started experimenting with music in one of their uncle’s studios. Working hard to create a unique sound that “belongs in the future” but pays “homage to icons that helped pave the way,” the two inject their sarcastic, playful, and funny spirits into their music and videos.

The singer-songwriter has been writing her own music for 8 years and singing since childhood. Speaking her truth through her music, she produces relatable songs that truly express who she is, resonating with her audience by keeping true to her craft.

Oluwatobi Ajibolade, known as TOBi, is a Nigerian-Canadian rapper and singer whose sound is unapologetically soul.

He writes, raps, and sings about experiences true to him and his life. Turning pain into inspiration, he explores and evokes the depth of emotion through his words and melodies.

In a statement about the remix of City Blues, which features the Game, TOBi says “This song is special to me because it’s so honest. Hearing the Game’s verse for the first time was unreal and the picture he paints is vividly intense. These are the realities of the world we live in. No filters, no apologies. It’s amazing as artists that we can release these experiences to the world through music.”

For my country music lovers, Chad Brownlee’s  music has a certain sincerity that promises to tug at your heartstrings. The BC born country boy and former hockey defence-man plays old country with a touch of influence from rock and pop.

Writing his songs in his cabin in the backwoods, his “heartwarming vulnerability” and lyrical depth “unearths as age and experience makes him wiser, stronger and more resilient.”

“It is what it is” but I don’t want to let go of this song. ‘Grew Apart’ is a breakup anthem for those who are going through a bitter ending and aren’t necessarily ready to come to terms with it.

The lyrics shrug off the pain in the chorus, saying “it’s for the best, it’s over now. It wasn’t anyone’s fault it didn’t work out.” While the verses admit that part of him might still wish it isn’t really over yet.

This beautiful songstress and influencer writes and produces her own music, oftentimes co-producing and recording it with her partner, A-Fos.

Her “feathery smooth voice” is paired over a mix of R&B and pop tunes. The musician meets all-around creative, studied music in school and is known not only for her beautiful voice but for being a Much Creator and travel, fashion, and lifestyle influencer.

At the age of 4, Haviah began taking music lessons. At 15, she began producing music. At 17, she released her first mixtape.

The rapper is a lyrical genius and vocalist that has created some of the most defiant and empowering raps that ultimately are an invitation for dialogue in society. Known for her freestyle rapping capabilities, she’s a force to be reckoned with in the hip hop world.

This “moody witch” who stole the hearts of the judges on The Launch. Her incredible sound ” unleashes a siren wail that conjures nineties pop femme fatales and eighties rock goddesses—while showcasing a fierce independence and singular style all her own.”

The old school beats that provides the backdrop to her music reminisces on the 80s, mixing well with her angsty and confessional lyrics and evocative voice.