Sometimes life can lead us down paths to a dead end, and sometimes that dead end is the very thing that inspires an incredible change. Australian-born Josh Adamson shares how he went from partying his life away to becoming an inspired trainer changing lives. Today Josh is a Nike Master Trainer, a gym owner at Lift Corktown, and one of the most sought-after trainers in Toronto. His impressive clientele list includes Toronto’s own Shawn Mendes, DJ Unimerce and two-time Olympic Snowboarder Mark McMorris, to name a few. Josh’s Philosophy – results-based training. What does that mean? All you have to do is show up, and he will take care of the rest. Whether you’re looking to gain strength, lose weight, or improve endurance, stamina or mobility, he’s got all the resources to ensure you achieve your results. 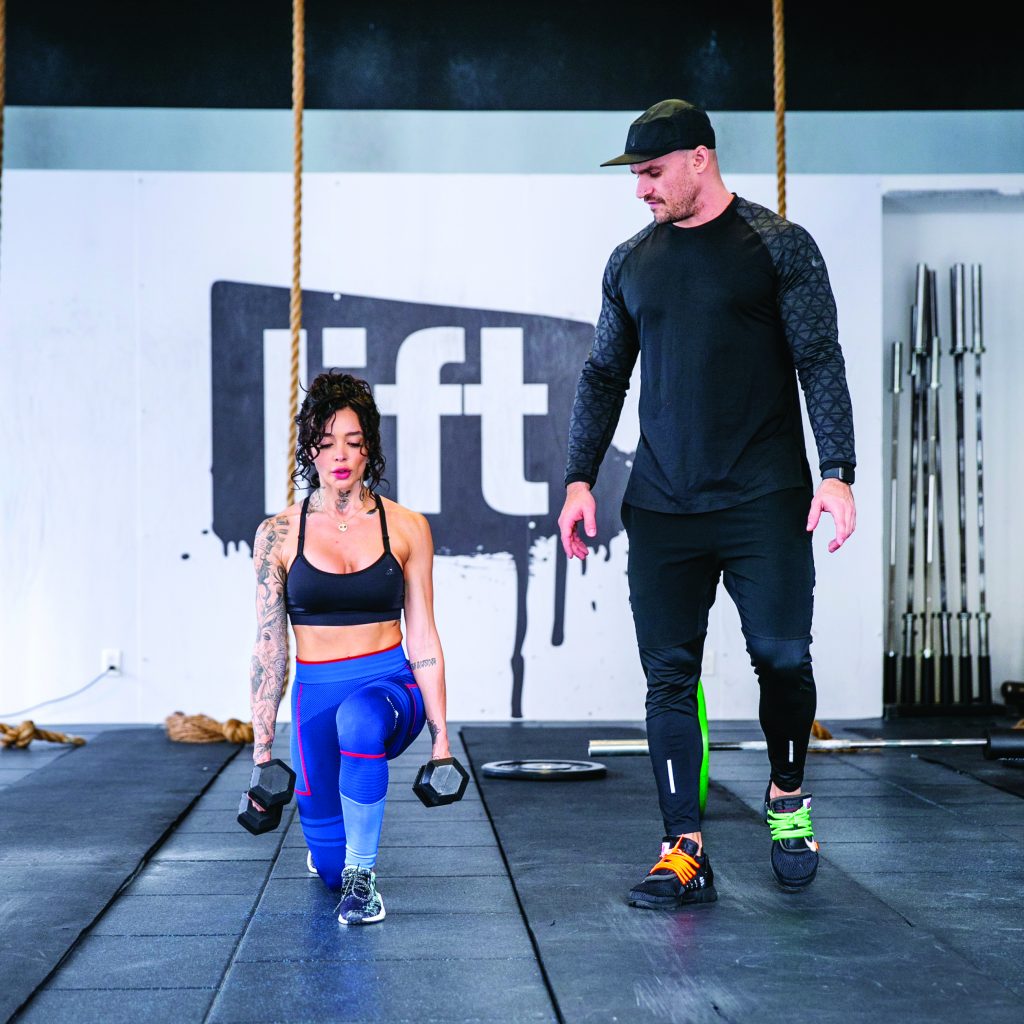 What initially brought you to Canada?

Originally it was for snowboarding. I wanted to get out of some of the circles that I was in as an Australian. So I moved to Whistler, and I spent all of the money I saved in Whistler just partying and living. Then I got my plane ticket to Toronto, came off the plane with like $360. I had no friends, no family, no job, and no place to stay. I literally stayed in a hostel for a couple of weeks while I was finding my footing, but then worked my way up from there.

How did you get into the fitness industry?

I don’t know if I can tell the whole story; let’s just say I was at a party in a backyard and I wasn’t all there (he chuckles), but one of the guys was in the swimming pool and he was talking about how he was going to school to become a trainer. At that point I was just working in an Italian restaurant making coffee and I was, like, ‘What’s a trainer?’ And he explained that you basically teach people how to get fit. I thought that was like a celebrity thing; I thought only celebrities had people to work them out. And he said, no, you can go to school; it’s like normal gyms where you go in and work out. I hadn’t heard of that before. So the next day, I called up the school he had mentioned and had an interview there – and at the same time I actually enrolled for the army; I wanted to be a paratrooper. But then I went to the school and had an interview, and they told me that after I finished school they would teach me the format to make six figures a year. At the time, being a paratrooper in the army I would only make around $34,000 per year and so I thought this sounds way better. As a trainer, I would get to help people and change their lives, so I ended up going down that route.

How did Lift begin – when was it born?

Lift began when I met my business partners at another place that we worked at. I felt there was a gap within the fitness industry, especially within CrossFit gyms. I’ve worked in CrossFit gyms before, and I recognized that there was something missing within the industry that needed to be filled. So we came up with the idea of adding in other classes that aren’t just CrossFit that will help build up CrossFit classes. Instead of just doing Olympic lifting and met cons, we do a lot of accessory work. No other gyms were doing that in Toronto at the time.

What is your training style/philosophy?

Results-based training is our philosophy here. So whatever’s going to get you the result is what we specialize in, and that’s why we have many different styles of fitness within this facility, because everyone responds differently. What is going to give you results will be different for me. I love powerlifting, but that might not be good for you. It’s my job to find out what’s going to give you results. So that’s our philosophy – results-based training, for sure.

How did you break into the celebrity clientele world?

At the end of the day, it just comes down to personality. If you give people a good time when they come into the gym – you hang out and you’re friends, but at the same time you give them a good workout and they feel great when they leave – it’s going to get people coming back. So at the end of the day, referrals are what got me, and I’ve trained a couple of Olympic athletes like Mark McMorris. And you’re probably also referring to Shawn Mendes. Mark introduced me to Justin, Shawn Mendes’ manager. So I was texting with Justin for a while, and we ended up getting Shawn in and giving him a tough workout. Shawn is literally the coolest; we became buddies immediately and that’s what it comes back to: if you can create a good relationship with someone immediately, and if you just click, like Shawn and I clicked, then they’re going to come back. Now Shawn’s on tour and I shoot him messages every day for workouts, and he wants to take me on tour starting with the U.S. portion as well. 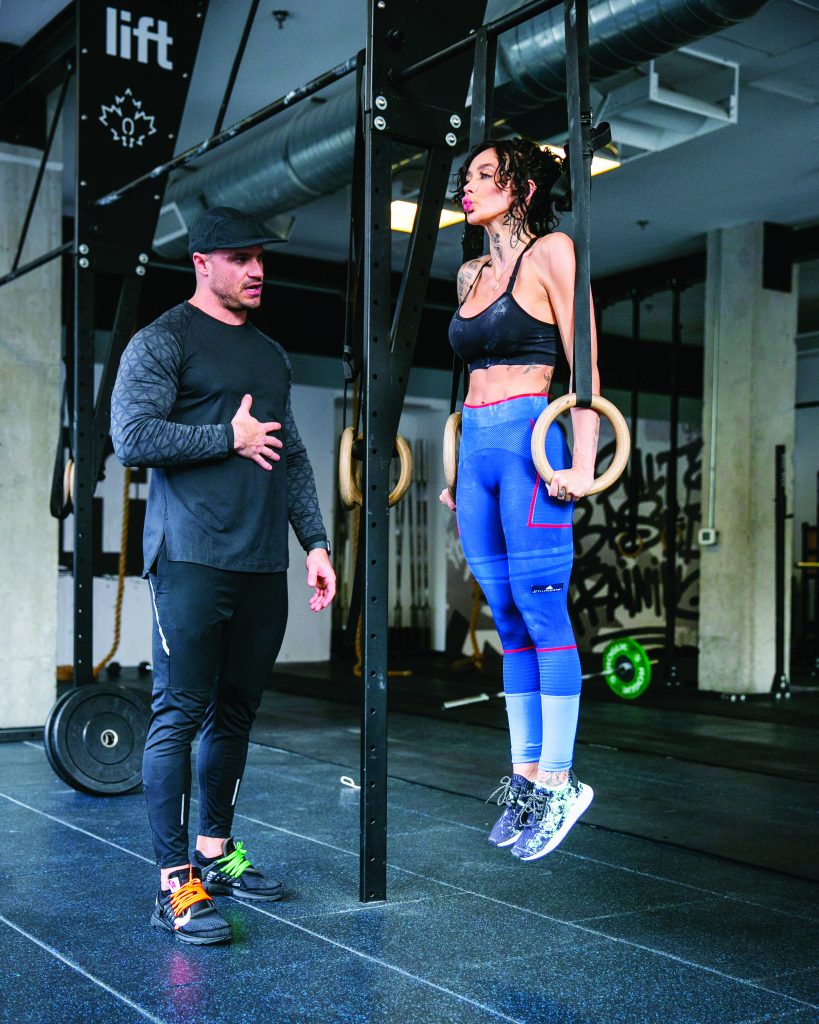 What’s one of your top nutrition tips?

That can be anywhere from drinking water to food to supplements. Nutrition is such a big thing to tackle. I mean nutrition is case by case; it’s very individual. So my tip would be focused on changing habits, not focused on how many calories. All that doesn’t matter if you don’t have the habits of waking up, eating breakfast, or having protein within each meal or certain other habits that people just don’t have. It would for sure be changing habits rather than focusing on what you’re eating at the start.

Do you recommend intermittent fasting?

When you get into intermittent fasting or the paleo diet or anything like that, I don’t recommend anything to anyone. I’m like, ‘try it; it might work for you, but it’s not necessarily going to work for someone else.’ People often say, ‘oh vegan this, vegan that, you need to be vegan, or intermittent fasting, or the carnivore diet, this diet, that diet.’ If it works for you, great, but you can’t preach to someone else that it’s going to work for them. Everything’s individual in terms of your medical history, so you can’t recommend anything unless you go into someone’s medical history and start working through trial and error.

What’s the best way to get motivated when you’re feeling down?

If you’re not feeling it, then you’re not doing the right style of fitness for you. You should be excited to go to the gym and work out. That’s why some people who just aren’t excited to go to the gym, work out by themselves. That’s why they hire me and we get to hang out. You know what I mean, it’s like, come and hang out with friends, but we get a workout in at the same time. We talk and people get excited to come to see me, and that might be the motivation they need. They might get excited to come to the 5:30 class every day because they get to see their friends, so at the end of the day maybe join a small community of people and become a part of that community. Because going to a global gym every day by yourself and sweating it out alone might not be your jam, but being a part of a community and a boutique gym might be.

What would you say is the best form of discipline to strengthen the mind?

You know it’s funny, because I’ve spent 17 years learning how to strengthen my body and becoming as strong as possible. But last year I had this thing where I was, like, I want to focus on strengthening my mind to be as strong as possible. By reading the right books, hiring a coach etc. I have a coach I work with one-on-one on both a personal and professional level, because if your personal life is off, it’s going to affect your professional life, and if your professional life is off, it’s going to mess with your personal life. So reading the right books, finding the right people to inspire you, hiring a coach: that is how you train your brain.

What is a good book you’re reading right now?

The Rise of Superman by Steven Kotler, and Stealing Fire by Steven Kotler and Jamie Wheal, which I actually got through Shawn Mendes. That’s why he and I clicked, because he’s into training his brain, and if you want to be the best in the world at something, it starts up there! And he’s doing really well within his industry, but you can always be better.