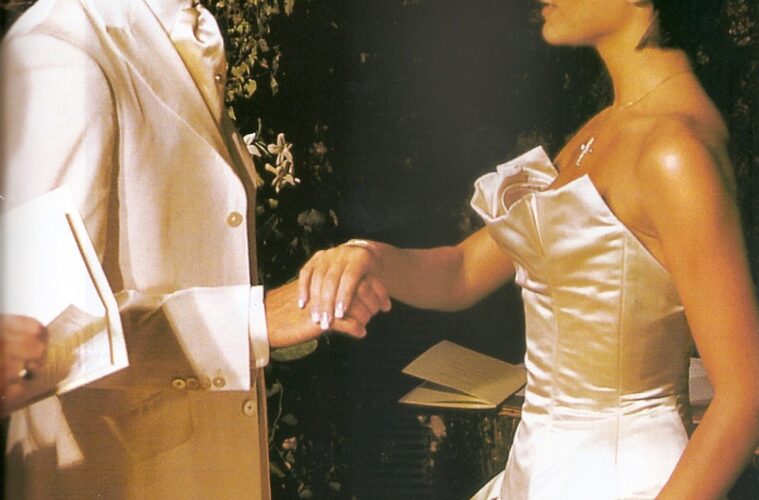 Celebrity weddings are often some of the most exciting tabloid fodder of the year – everyone wants to know how glamorous the location was, which A-list friends attended and what designer dress the bride wore.

From the moment the engagement ring is revealed – whether it be a traditional diamond or a modern sapphire ring – the wedding speculation begins. Some celebrities have gone the extra mile and thrown decadent parties, while others have kept it unusually simple and gotten married on a whim.

Of course, summer weddings are also notoriously popular, since summer is the best time for frivolity and passion. So, here is a list of the most unique celebrity summer weddings over the past few decades.

Olivia Wilde has been around Hollywood for some time. She is known for her role in the 2007 Drama series House and more recently for her directorial work on Booksmart and Don’t Worry Darling (currently in post-production).

What some people might not know about her is that she actually got married to an Italian prince in 2003, when she was just 19!

The wedding took place in the middle of summer on the back of an abandoned school bus in Virginia, and reportedly happened in the company of only a few friends. The marriage was expected to fail, since it took place only a few months after the couple met, but the pair were very happy together for almost 8 years before calling it quits in 2011.

In 2006, Pamela Anderson embarked on a 4-month long marriage to Kid Rock. The couple wed on a yacht in Saint-Tropez, wearing vacation appropriate attire – Anderson wore a white bikini and Rock wore jeans and no shirt. This was Anderson’s second summer wedding – the first was to Tommy Lee on a beach in Mexico in 1995.

Anderson’s original marriage to Kid Rock was not considered legal, so they had to have another ceremony in a courthouse chapel a week later.

The bride wore a colourful flower crown, and the guests had the chance to go on festival rides (including a ferris wheel) and eat from street food stalls and a rustic gin bar in the middle of a field.

The entire affair seemed like it was perfect for summer – fun, carefree and entirely held outdoors. The wedding was a nice contrast to typically formal ceremonies.

On 29th June 2019, the ultimate cool girl Zoe Kravitz got married to Karl Glusman after meeting 2 years earlier. The duo were married in a three-story, 18th-century mansion in Paris owned by Kravitz’ father.

Kravitz wore a tea length white dress with a vintage style fitted bodice and white flats, while the groom wore a traditional suit.

Kravitz’ wedding was, as expected, packed with A-list actors and actresses; including her Big Little Lies costars Shailene Woodley, Reese Witherspoon and Nicole Kidman. Kravitz changed into a second wedding dress for the reception, ditching the ballerina style gown for a fitted 2 piece, also by Alexander Wang.

The most interesting thing about Kravitz’ wedding is how the entire thing went almost completely under the radar until she released the photos months later.

While Kravitz and Glusman were enjoying their quiet wedding in Paris, Sophie Turner and Joe Jonas were getting married at their highly publicised wedding not too far away. Despite officially getting married in a surprise Las Vegas ceremony after the Billboard Music Awards in 2019, Jonas and Turner maintained their original wedding date in the summer and celebrated a second wedding.

The entire world was privy to the Vegas wedding thanks to Diplo – who shared the event on Instagram live. The happy couple exchanged candy rings and were married by an Elvis impersonator amongst their celebrity friends.

Despite already being married, the pair each enjoyed extravagant bachelor and bachelorette parties before the second ceremony – apparently Joe’s party had the cops called on them three times!

The second ceremony was held in the south of France in an 18th-Century chateau, and was much more elegantly decorated and curated than the first.

One of the most iconic celebrity couples – the original Posh Spice Victoria Beckham and soccer superstar David Beckham – got married in the summer of 1999 in a castle in Ireland.

The bride wore a staggering 18K gold tiara and the couple had a dove released in the middle of the ceremony, right after they said ‘I do’.

Despite the public interest in the couple, they wed to an audience of just 29 guests, in a romantically decorated location. The reception, however, was much larger. Over 200 guests watched the newlyweds sit atop a pair of golden thrones, before changing into a set of matching purple outfits and cutting into their wedding cake using a sword.