UK Castles You Can Stay At For a Royal Getaway

Whether it’s just for a spontaneous weekend away or for an anniversary celebration, not many places can rival a romantic stay in a castle hotel.

The United Kingdom is home to hundreds of historic fortresses with bricks steeped in history and century-old charm. Surely not everyone can afford to buy a castle, but that doesn’t mean you can’t live in one. At least for a night or two. Now you can experience life as a royal and enjoy a holiday escape as great as your imagination. From those dating back to the medieval times to those with a contemporary makeover, we discover that castles don’t just exist in fairy tales…

Feel like royalty or a knight of the realm by checking into Thornbury Castle  for the night. Once host to King Henry VIII and his new bride Anne Boleyn, this 16th-century fortress is situated on the edge of the Cotswolds and features stone walls, detailed ceilings and a Rapunzel-esque tower suite. Don’t feel alarmed if as you approach you’ll feel like a long-lost relative of the British Royal family. Each room in Thornbury Castle is bound to make you feel like the Lord and Lady of the manor.

Decked with stone walls, four-poster beds and hanging tapestries, the traditional decor will transport you straight back to the Middle Ages. During the afternoons you could challenge your partner to a round of archery, falconry or croquet. Or simply enjoy some afternoon tea and take in the incredible grounds as you explore the walled gardens and nearby turrets and towers. If you’re in the mood to take a break from the medieval times you could always retreat to the nearby Vicarage Farm Holistic Therapy Centre for a little relaxation.

Walking away with the title of ‘UK’s Most Romantic Hotel’ last year, Langley Castle Hotel once again proved that this historic site is good at playing cupid. Established in the 14th century, it is situated on its own ten-acre woodland estate.

Langley features nine guest rooms within the Castle itself and a further eighteen rooms in the grounds each with their own contemporary twist. Ranging from a spa bath to a sauna and walk-in wardrobe, these modern features are nothing compared to the  impressive archways and fairy-tale staircases.

Each of the rooms are decorated in a traditional way complete with medieval features. Think hand-carved beds, dark wood furniture and those thick full-length drapes you often see in fairytale books. The castle may be steeped in history, but there’s nothing old-fashioned about the quality of this accommodation.

Just outside Edinburgh, located in the beautiful rolling hills of the Scottish Borders lies Cringletie House Hotel. This unique property is as romantic as castle hotels come. Originally built in the 1600s it was later demolished and rebuilt with famous Scottish architect David Bryce behind the design.

No two rooms are the same as each of them feature special architecture and unique characteristics from romantic turrets to feature fireplaces.The hotel’s dining room also includes an historic fireplace and includes hand-painted ceilings creating the perfect backdrop for a romantic dinner for two.

The 28 acre grounds are perfect for exploring the Scottish countryside. But if you’re in the mood for some rest and relaxation they offer an in-room spa where a therapist will come to you. Forget heading out to a treatment room that’s so 2018 darling.

This English castle describes itself as ‘no ordinary hotel’ and has every justification for doing so. If you’re looking for a special place to stay that’s fit for a king and queen, look no further than Lumley Castle. The 600-year old site is surrounded by flawless parkland and is steeped in honour and pure medieval grandeur. Created by Sir Ralph Lumley, the striking venue has retained all its original features like deep-set fireplaces and oak wood panelling. 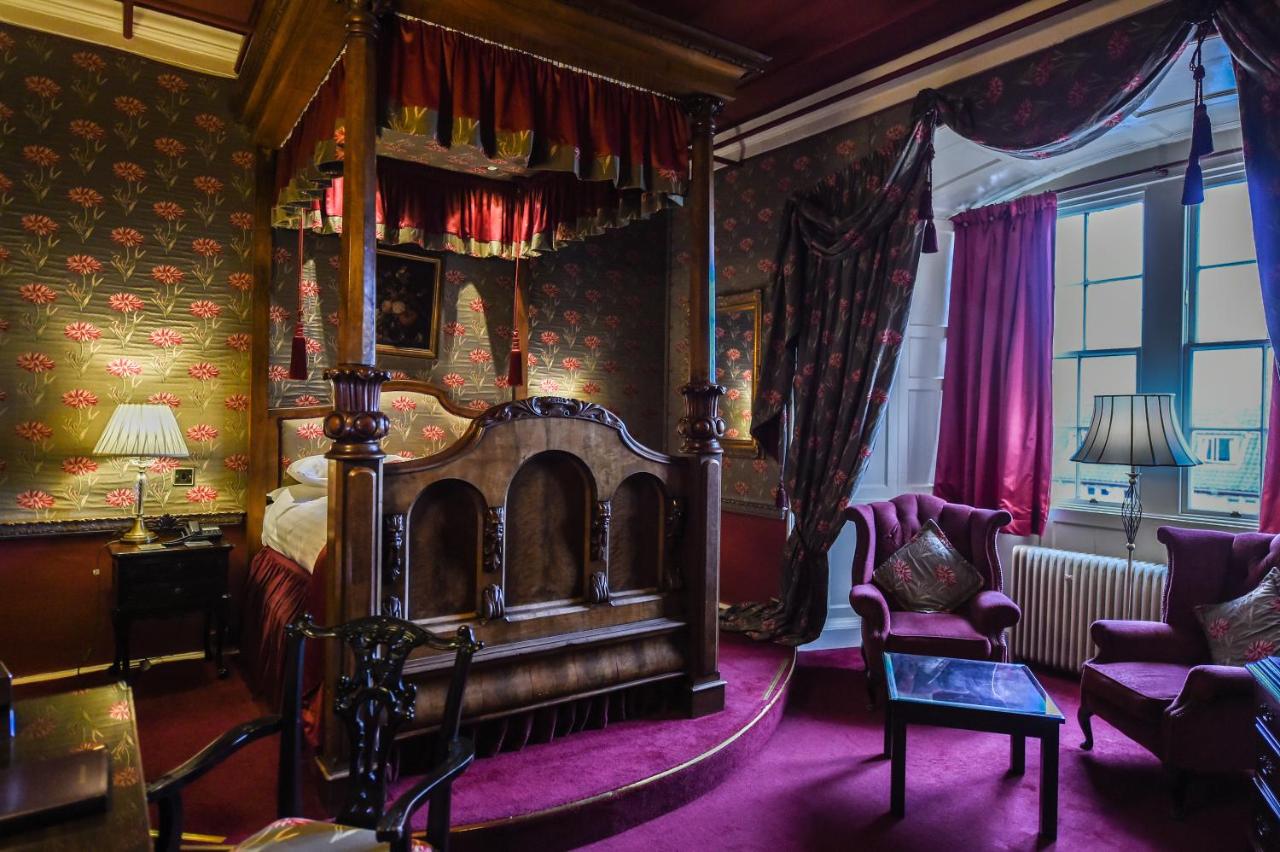 The rooms are all individually decorated and include elegant four-poster beds and if you’re lucky some even have the hotel’s signature secret bathrooms. If you’re looking to have a free-standing bathtub to enjoy the Queen Anne room is for you while the King James suite has a jacuzzi bath with its very own reception room.

Other highlights include the Black Knight Restaurant where you can indulge in some English local cuisine and try your hand at a traditional Sunday roast or a spot of Early grey tea.